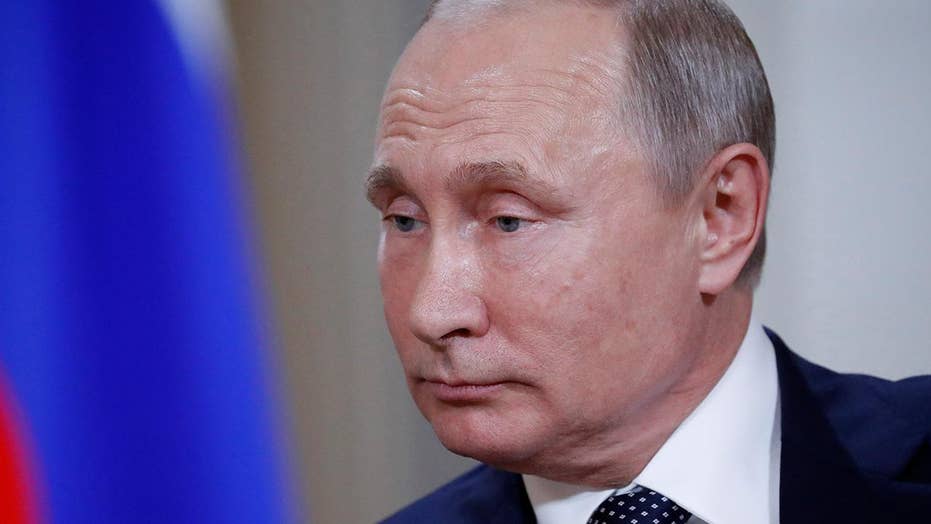 What's next for Putin after World Cup success?

Russian President Vladimir Putin hopes hospitality and openness in Russia during the World Cup will dispel 'myths and prejudices' about his country while observers say it's an oppressive country that violates basic human rights. Amy Kellogg reports from Moscow.

MOSCOW – The World Cup soccer championship held here has been celebrated as a huge success, and Russian President Vladimir Putin said he hoped the hospitality and openness on display will have dispelled some of the "myths and prejudices" about the country.

But Alexander Cherkasov, chairman of the board of the human rights group Memorial, said there is a lot about today's Russia that harks back to the USSR.

"In 1980, during the Moscow Olympics, people joked that the promise had been given to build Communism, but instead the Olympic Games were organized. Back then, it was very nice in Moscow, and food appeared in grocery stores," Cherkasov told Fox News. "Now it’s not about food but some freedom that was given. What happens to it now? We are all looking forward to see when will it disappear."

Cherkasov said the situation in Russia also has features of a Soviet-style police state.

"Political repression has become an important part of our public life," he said. "Some time ago, there were real opposition parties, but now the official opposition of 'his majesty' doesn’t raise uncomfortable questions. Some time ago there was independent media, and now all of them are controlled by the state and the discussion of problems is marginalized and is carried out in a very narrow circle."

Memorial estimates there are about 150 political and religious prisoners in Russia, but Cherkasov said it is hard to track because there are no longer prisons specifically allocated for them, and also prisoners are often charged with other crimes like fraud, drug dealing or terrorism, and regime critics say those charges are often spurious.

Cherkasov also said the monitoring of social media hit a new low recently when a Russian doctor got picked up for "liking" a posting that was critical of Russian military involvement in Ukraine.

"This is a new side of the reality – criminal prosecution for sharing something online has become a usual thing in our public life, but a criminal case for a LIKE is something new,” Cherkasov said. “Memorial feels this breath of new time on its own back. In two regions, our colleagues have been arrested; criminal cases against them were opened.”

Yuri Dmitriev in Karelia is accused of pedophilia, alleged production of child pornography and pedophilia, and OyubTitiev in Chechnya on drug charges.

The World Cup soccer championship held here in Russia has been celebrated as a huge success, and President Vladimir Putin said he hoped the hospitality and openness on display here will have dispelled some of the "myths and prejudices" about the country. But observers say it's an oppressive place that violates basic human rights. (AP)

"As far as we know," Cherkasov told Fox, "both cases are trumped-up."

Russia cleaned up the World Cup host cities, including Moscow, for the big event – literally and figuratively. Demonstrations were not allowed in the capital or in any of the host cities.

But there was a breach. The punk /opposition group Pussy Riot managed to run onto the soccer field Sunday night during the World Cup final match between France and Croatia. They had hoped to get a message across before police hustled them out of the stadium.

The group called for the release of all political prisoners in Russia, including Oleg Sentsov, a Ukrainian filmmaker sentenced to 20 years in prison for "plotting terrorist activities." He is into his tenth week of a hunger strike and denies the charges against him. He was an activist protesting the annexation of Crimea.

In the end, Memorial's Cherkasov wasn't too complimentary of the U.S. president, either. Nor was he terribly enthusiastic about the prospect of the Helsinki Summit on Monday.

"I don’t know how it is going to sound, but I have a feeling that in terms of values, respect for values, the two presidents – Russian and U.S. – deserve each other."

One of the complaints that human rights groups have is that many NGOs and civil society groups in Russia have been branded by the government here as "foreign agents" and have dealt with harassment. President Putin on Monday in his press conference said that he would like to see better cooperation between U.S. and Russian humanitarian groups.

In the event of true normalization between the two countries, Cherkasov hopes that human rights will be an essential part of this normalization.