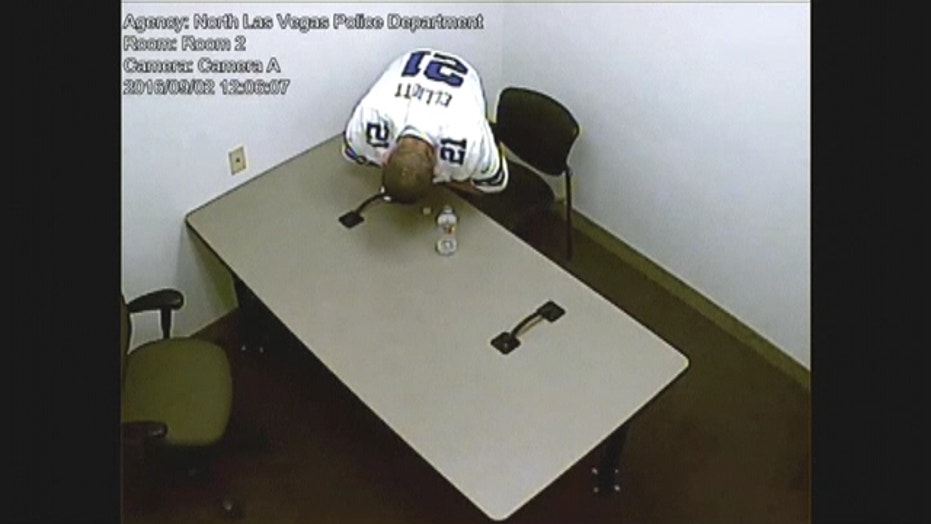 Video shows a Nevada homicide suspect breaking a set of handcuffs before climbing onto a chair to remove a ceiling tile and escaping custody.

A surveillance video taken inside the interview room of a North Las Vegas jail shows a homicide suspect breaking a set of handcuffs before climbing onto a chair to remove a ceiling tile and escaping custody.

Alonso Perez is seen twisting and muscling the hinge of the handcuffs attaching his right wrist to a metal bar on a table bolted to the floor of the North Las Vegas police office he escaped last Friday.

"He torques it to the point, using some of his body weight, that it snaps the hinges," Police Chief Alexander Perez said Wednesday. The police chief and the suspect are not related.

In the video, Alonso Perez returns to his seat, where the police chief said he sat calmly with his wrist on the bar when a police detective checked on him. When he was alone again, Alonso Perez climbed into the ceiling to make his escape.

It was another 25 minutes before detectives realized he was gone, the police chief said.

Alonso Perez was still wearing ankle chains and the broken cuff on his right wrist when he dropped back down from the ceiling into a hallway, exited a door and stole a work truck that had been left idling in a nearby parking lot, Alexander Perez said.

Police said a witness told investigators he thought the truck thief was limping.

The truck, emblazoned with a rental company name, was recovered a few hours later abandoned in a neighborhood several miles east of downtown Las Vegas.

Alonso Perez didn't resist arrest, and the police chief said another person in the apartment wasn't charged with a crime.

Alonso Perez, who also uses the name Alfonso Perez, is the suspect in the Aug. 27 shooting death of Mohammed Robinson outside a McDonald's restaurant in North Las Vegas.

Alonso Perez wasn't armed when he was arrested, and wasn't still wearing the handcuff and ankle chains. The police chief said detectives are still looking for the weapon believed to have been used in the slaying.

Witnesses have said the fatal argument began with angry words about Robinson not holding a door open for a woman.

Perez was held overnight at the Clark County jail in Las Vegas pending court appearances Thursday on use of a firearm, assault and domestic battery charges in a separate case, according to court records. It wasn't immediately clear if he had a lawyer.

Murder, use of a firearm, escape and auto theft charges were added Wednesday, the police chief said. Alonzo could face an initial court appearance on those charges Friday.

The police chief said the escape involving broken handcuffs from a police interview room was the first in his 25 years as an officer in North Las Vegas. He said an internal investigation is looking at mistakes made. The detectives handling the interview on Friday are still on the case.

But the chief said he has already ordered one policy change for when detainees are left alone in interview rooms. "Someone will monitor the video at all times," he said.

The escape was the second reported this year from a police station in the Las Vegas area.

In April, Ivan Mayoral-Lizarraga fled from a Las Vegas police substation during questioning in a stolen vehicle investigation. He was arrested about two weeks later, and pleaded guilty to felony home invasion, assault with a weapon and escape charges. Mayoral-Lizarraga is serving two to five years in state prison.