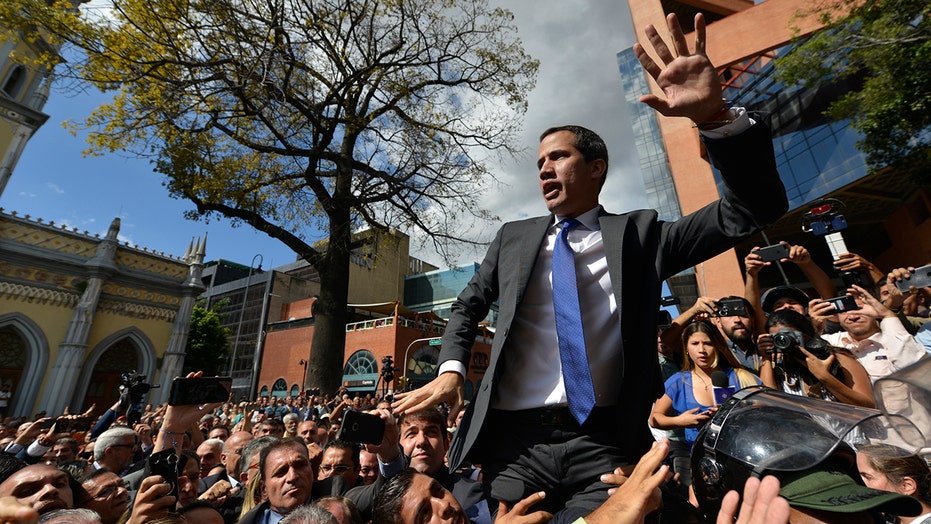 The man recognized by the U.S. and over 50 other nations as Venezuela’s rightful president made his way toward his seat in the National Assembly and led lawmakers in boisterously singing the country’s anthem.

Shortly thereafter, electricity in the building went out, but lawmakers continued in the dimly lit assembly, shouting into microphones that did not work to declare Guaidó the legitimate president of the congress.

Opposition leader Juan Guaido argues for National Guards to let him and all opposition lawmakers into the National Assembly, saying he will not enter unless all of them are allowed entry, outside the legislature in Caracas, Venezuela, Tuesday, Jan. 7, 2020. (AP Photo/Matias Delacroix)

“This is a show of what can happen when we are united,” Guaidó yelled.

Venezuela’s opposition is facing its biggest test yet after government-backed lawmakers announced they were taking control of what Guaidó supporters have described as the nation’s last democratic institution.

Guaidó has served as president of the National Assembly for the last year and used it as his platform to gain international recognition. He was expected to be re-elected as the legislature’s leader Sunday but was blocked along with several other lawmakers from entering congress.

Former opposition ally Luis Parra declared himself the National Assembly’s leader, claiming to have won the votes of 81 lawmakers.

With the power out, opposition leader Juan Guaido, right, is sworn-in as the president of the National Assembly by lawmaker Juan Pablo Guanipa in Caracas, Venezuela, Tuesday, Jan. 7, 2020. (AP Photo/Andrea Hernandez Briceño)

The opposition refutes that tally and says 100 lawmakers, a majority, voted for Guaidó in a legislative session held later at a Venezuelan newspaper.