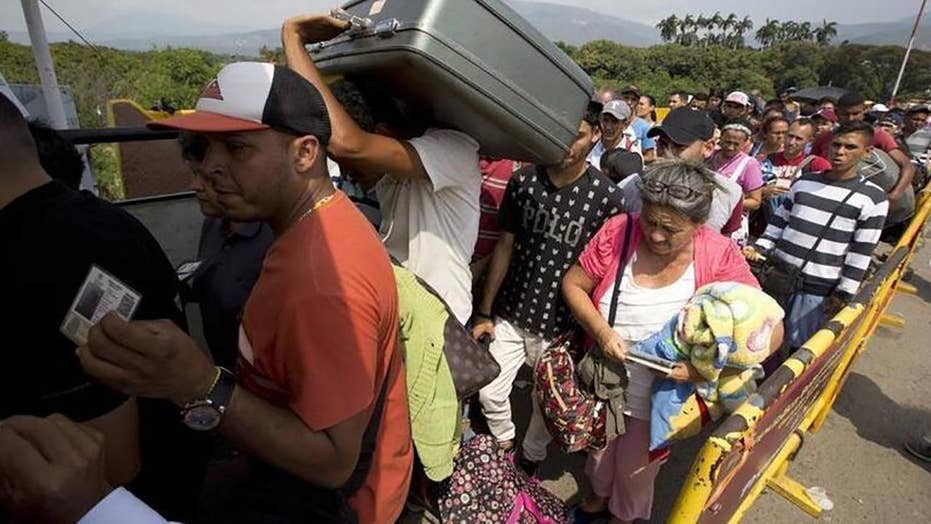 The people of Venezuela are victims of genocide and the first- narco-dictatorship of the 21st century, claims prominent opposition leader and former political prisoner Antonio Ledezma.

“This is a premediated massacre, the worst of its kind because it is against its own people,” the 63-year-old exiled politician told Fox News on Monday, ahead of a speech at the Oslo Freedom Forum in New York. “The worst part of it is seeing the children dying of malnutrition, and the women dying of breast cancer because they can no longer get cancer medicine.”

Ledezma said another 300 children are expected to die this year due to malnutrition alone, and maintains several hundred, possibly thousands, of people have been shot dead since protests began almost five years ago. And from February to May of last year, he charged, there were more than 130 political assassinations orchestrated by the government.

“Under this regime, you will die in one of three ways,” he said. “Either by protesting and the forces will shoot you, or because of lack of medicine or a lack of food.”

Ledezma, who is advocating for a UN-led humanitarian intervention in Venezuela, expressed exasperation that world leaders have not come forward to officially designate Venezuelans as victims of genocide.

“It is incredible how this regime is starving its own people to death,” he said. “We have all seen the pictures. We have all seen the videos and the proof of what is happening. Why is the international community not calling this a genocide? Because that is what it is.”

Graphic images and vivid accounts from those inside Venezuela’s crumbling socialist economy have ranged from hospitals stuffed with wailing patients unable to receive medication or professional treatment to women forced into prostitution, to polls indicating the average Venezuelan survives on just one scavenged meal a day.

That's a sharp turnabout of treasures for the oil-rich country, which throughout the 1970s and 1980s was considered the wealthiest nation in Latin America, and a beacon of stability and prosperity for those fleeing other conflicts.

Socialist firebrand Hugo Chávez came to power in 1999, and instituted a range of policies that critics say set in motion the economic death spiral from which the country has not recovered.

Chavez was succeeded after his death in 2013 by Vice President Nicolas Maduro, who campaigned on the promise to continue the Chavez legacy. Maduro himself studied in Cuba, and was a member of the ultra-left-wing Socialist League.

“The Venezuelan people have always been very hard-working and hey never wanted anything handed out to them, what happened was that they fell into the hands of socialist populists,” Ledezma said. “Venezuela now is the first-known case of a narco-dictatorship. This is a failed regime under the management of mafias and gangs.”

Ledezma said numerous branches of the Venezuelan government are involved in inciting gang violence, including unions who claim to be “on the side of the people,” but are directly connected to the government.

“These are the people connected to the drug trafficking. If you need cement or anything like that, you go through them, but this is all collected by unions, of mobsters who work with the mafias to bring the supplies in,” he vowed. “Then you have all the teenage gangs who have grown up under this regime. It’s a whole generation that has just become gangs. It’s the only way of life that they know. And then all the parts of the intelligence service, militia groups who are part of the police and even the jail directors pushing the violence.”

Ledezma himself knows firsthand what it means to be a victim of the Venezuela clampdown. His own nightmare began with a late- night raid on Feb. 19, 2015, when he was detained by the Bolivarian Intelligence Service at his office – while serving as the mayor of the capital city of Caracas – under charges of being involved in an American plot to “overthrow the government.”

“I got more than one thousand days in jail without any commodities or basic necessities. Of the 1,000 days, I only got an audience with a judge one time, and they gave me 26 years in jail,” he recalled. “In my 1,000 days, I was moved to three different jails. There were torture chambers and then finally house arrest. I lived in a tiny apartment, I could not go outside or do anything.”

Venezuelans line up behind a vehicle providing free meals (Copyright 2018 The Associated Press. All rights reserved.)

Human Rights groups decried his arrest as politically motivated, and without evidence. Maduro’s imprisoning of opponents has been broadly criticized by much of the international community since he took power, and served as the impetus last year for the Trump administration to impose sanctions against Maduro and a host of other government officials.

Nonetheless, Ledezma did the unthinkable on the morning of Nov. 16 last year, when he quietly slipped past his guards outside his tiny house arrest apartment and journeyed with scores of other refugees into neighboring Colombia on foot, arriving the following day.

In security camera footage he showed to Fox News, which has never been publicly revealed due to security reasons, an unrecognizable Ledezma can be seen in a black and white hoodie strolling nonchalantly - head down - with a group of people through the metal turnstiles, passing from one nation to the next, without being apprehended.

Ledezma’s escape was praised by opposition supporters around the world. The now-outspoken human rights activist currently lives in Madrid, Spain, with his immediate family – all of whom also had to flee their country.

Despite vehement denials of wrongdoing by the Maduro leadership, scores of human rights groups have accused the government of egregious violations of international law and arbitrary detainment of thousands who took to the streets to protest against the government.

Human Rights Watch reports that once detained, government agents are known to subject opponents to an array of abuses including severe beatings, electric shocks, asphyxiation, sleep deprivation, being hung in stress positions and sexual abuse – in some cases rape.

Ledezma warned that as conditions in the country further deteriorate, without humanitarian intervention, the migration crisis too will worsen – spilling out into neighboring nations. He cautioned that already some four million people – 12 percent of the Venezuelan population – now belong to the diaspora, having fled the chaos.

“And what is crazy is that people are doing this by foot – sometimes they are walking thousands of miles, taking up to one month. You see people walking along the highway in a straight-line, walking all the way to Chile,” Ledezma opined. “This is the worst mass migration in South America, what is happening is worse than in Syria.”

Last month, the UN’s International Organization for Migration (IOM) warned the refugee situation was indeed “building toward a crisis moment,” comparable to that of the massive Syrian refugee flow to countries across Europe in recent years.

Despite condemnation of his government by much of the international community, Maduro attributes the economic meltdown on opposition leaders colluding with the United States. Earlier this month, the President announced new economic measures he called a “magic formula,” which would serve as a “re-balancing process” to improve the falling currency.

Ledezma sees only one way to end the Venezuelan crisis. “That is,” he added, “to take Maduro out of the country.”