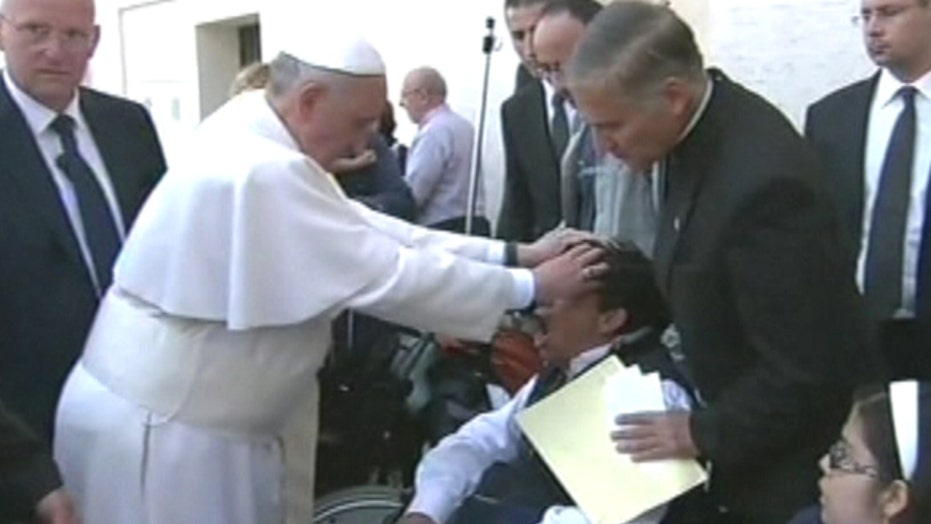 The Vatican is adamantly denying that Pope Francis performed an exorcism on a man in St. Peter's Square, saying Wednesday that the claim is "absolutely false."

Suspicions arose that the pope had performed an exorcism after video surfaced of Francis laying his hands on a man's head and reciting a prayer, upon which the man heaved deeply a half-dozen times, shook, then slumped in his wheelchair.

"The Pope had no intention of doing an exorcism, so it is absolutely false that this has been done," Vatican spokesman Rev. Federico Lombardi told Catholic News Agency. "He simply prayed for the sick person."

The man, who uses a wheelchair, was identified by the Associated Press as a 43-year-old husband and father who traveled to Rome from Mexico to attend Francis' Mass on Sunday in St. Peter's Square. According to the Rev. Juan Rivas, the priest who brought him, the man was possessed by the devil.

But Rivas maintains no exorcism was performed, saying Francis merely said a prayer to free the man from the devil.

"Since no one heard what he said, including me who was right there, you can say he did a prayer for liberation but nothing more," Rivas wrote on his Facebook page, which was confirmed by his religious order, the Legionaries of Christ.

The Rev. Gabriele Amorth, a leading exorcist for the diocese of Rome, said he performed a lengthy exorcism of his own on the man Tuesday morning and ascertained he was possessed by four separate demons. The case was related to the legalization of abortion in Mexico City, he said.

But Amorth told RAI state radio that even a short prayer, without the full rite of exorcism being performed, is in itself a type of exorcism.

"That was a true exorcism," he said of Francis' prayer. "Exorcisms aren't just done according to the rules of the ritual."