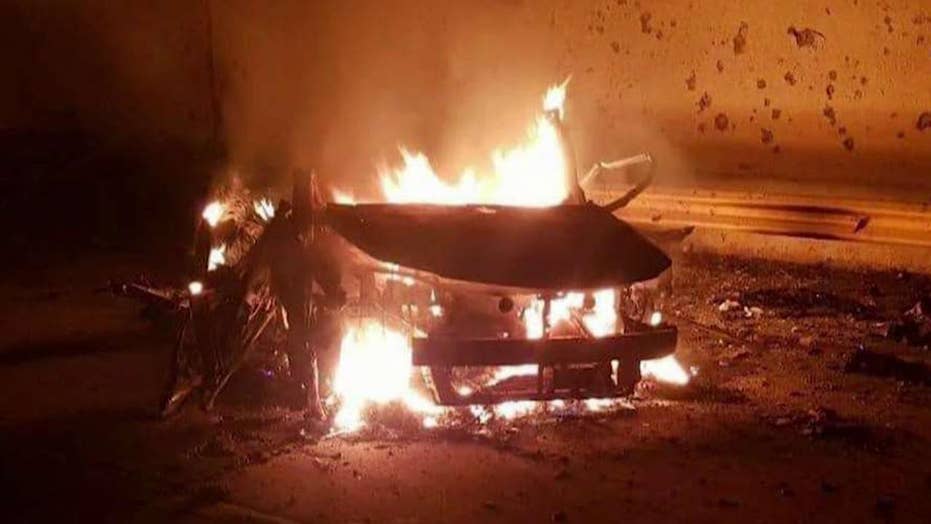 EXCLUSIVE: U.S. Special Operations forces on the ground in Iraq were following a convoy carrying Iranian Gen. Qassem Soleimani when it was struck by an American drone last week, killing Soleimani and nine others, Fox News has learned.

The soldiers following Soleimani's convoy as it left Baghdad International Airport were about a half-mile behind when it was hit by a missile fired from a Reaper drone. They were on the scene within a minute or two and performed a so-called "bomb damage assessment," taking pictures of the scene and confirming that the drone had picked out the right car -- and that Soleimani was no more.

SLIDESHOW: IMAGES OF ITEMS FOUND WITH SOLEIMANI AFTER FATAL US AIRSTRIKE

The car that Qassem Soleimani was riding in at the time of his death.

Fox News has obtained photos of the aftermath of the Jan. 3 drone strike from a U.S. government source. Some of the images -- which Fox News will not show -- include graphic, close-up views of Soleimani's body, which is grossly disfigured and missing limbs. Another photo shows Soleimani's body burning next to the car in which he was riding.

Qassem Soleimani's body lies burning next to the car.

The source told Fox News that U.S. forces dragged Soleimani's body away from the scene and extinguished the fire before formally identifying the Iranian general. They took photos of his possessions, which included books of poetry and wads of cash. He was also carrying a pistol and an assault rifle.

Under normal circumstances, Soleimani's phone and other electronics would be taken away for forensic analysis. However, the missile strike and ensuing fire made such an investigation impossible.

Some of the items Soleimani was carrying when he died. His phone is partially visible at the top left.

Sen. Mike Lee, R-Utah, told Fox News: "If you see a wounded veteran missing a limb or seriously disfigured the odds are pretty good they were wounded by an IED that was designed and deployed under the direction of Soleimani."

In April 2019, the State Department announced that Iran was responsible for killing 608 U.S. troops during the Iraq War, with Soleimani responsible for 17 percent of all deaths of U.S. personnel in Iraq between 2003 and 2011.

A source who served in Iraq and saw the photos told Fox News that Soleimani died in much the same manner as the Americans he killed.