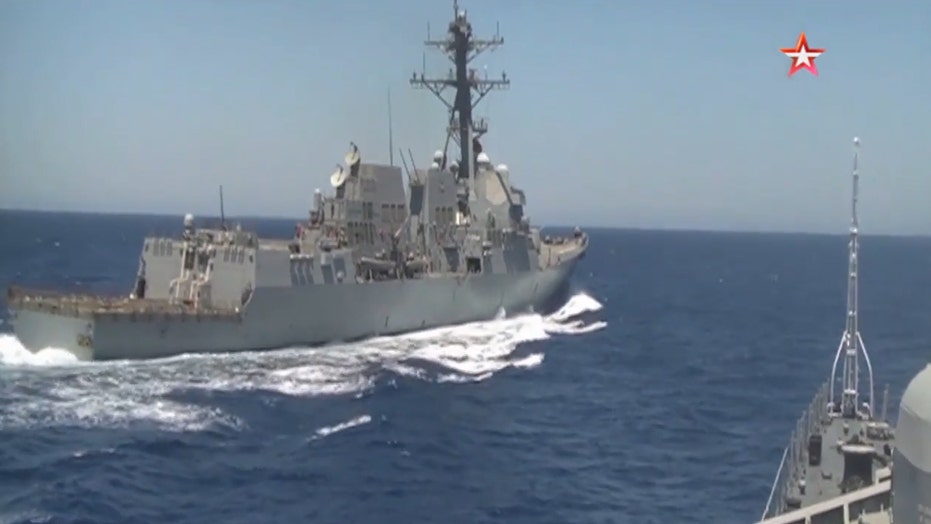 Russia, US blame each other for dangerous naval maneuvers

One day after Russia accused a U.S. Navy destroyer of sailing dangerously close to a Russian Navy frigate in the eastern Mediterranean Sea, two U.S. defense officials briefed on the incident told Fox News the Russian Navy was responsible, blatantly ignoring longstanding “rules of the road” on the high seas.

“These actions have the potential to unnecessarily escalate tensions between [Russia and the U.S.], and could result in a miscalculation or accident which results in serious injury or death,” one official warned.

The June 17 incident between USS Gravely, a U.S. Navy Arleigh Burke class destroyer and Russian frigate Neustrashimyy unfolded near the USS Harry S. Truman, an American aircraft carrier launching airstrikes at the time against the Islamic State terror group, according to the two officials.

Russia released a video of the incident through its state-run media yesterday which appears to have been filmed from the bridge of the Russian Navy frigate showing the U.S. and Russian ships maneuvering in close proximity.

While the Russian defense ministry claims the U.S. destroyer sailed close to its vessel, the video appeared to show that it was the Russian ship maneuvering to close the distance with the American warship.

The U.S. Navy destroyer was positioned roughly five miles away from the USS Harry S. Truman to protect the carrier from Russian ships. The Russians recently had made a habit of trying to get close to the battle group, the officials said.

The incident was the latest in a string of “highly provocative” actions from Russia to try intimidating the United States, according to the officials. In April, Russian jets buzzed a U.S. Navy destroyer in the Baltic Sea conducting a series of high speed passes at close range more than 30 times. A State Department spokesperson said earlier this week harassment of U.S. diplomats in Moscow by Russian spies had “increased significantly.”

One official said the Neustrashimyy had raised the day shape “ball-diamond-ball” on her mast, the international signal a ship displays when restricted in her ability to maneuver, when it took position two nautical miles off Gravely’s starboard quarter.

The Russian ship repeatedly asked Gravely over VHF radio, a common “bridge-to-bridge” radio required of all vessels at sea, to maintain a safe distance, while Neustrashimyy continued to maneuver to get closer to Gravely.

“The maneuvering demonstrates that Neustrashimyy was not in fact restricted in her ability to maneuver, and was thus intentionally displaying a false international signal,” said one official assessed.

The commanding officer of the U.S. destroyer assessed that Neustrashimyy was “intentionally trying to interfere with Harry S. Truman operations,” one official said.

The Russian ship came within 315 yards from the U.S. destroyer and five nautical miles to the American aircraft carrier, according to the defense officials.

The distance between Russian and U.S. ships was closer than previous Russian interactions in the eastern Mediterranean Sea, one official said.

The carrier and her strike group recently left the eastern Mediterranean in order to head home to Norfolk, Virginia after a nearly eight-month deployment to conduct airstrikes against ISIS.

The deployment was extended 30 days in order to close the gap between the time the carrier’s relief was set to arrive in the Mediterranean.

On Tuesday, the U.S. Navy announced that the USS Dwight D. Eisenhower had arrived and had begun launching airstrikes against ISIS in Iraq from the Eastern Mediterranean.