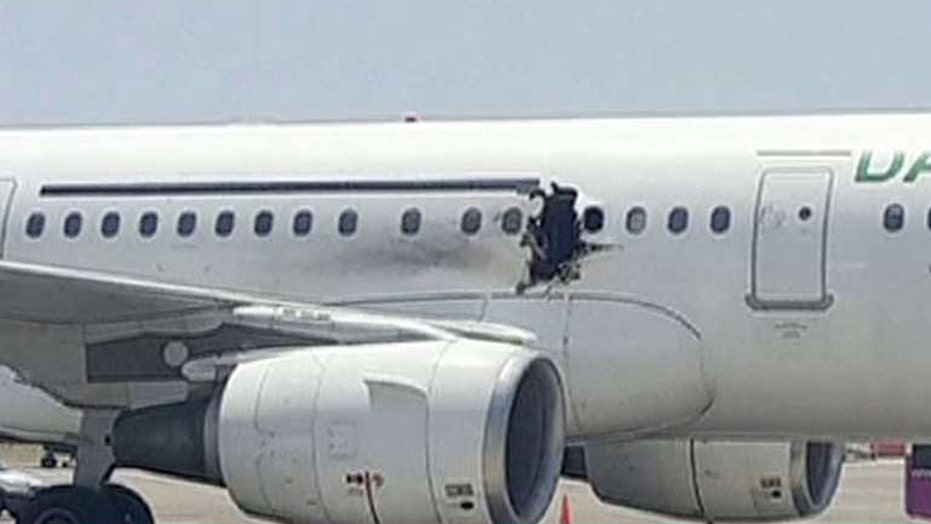 Federal authorities are closely monitoring the investigation into an explosion aboard a Daallo Airlines flight over Somalia and are looking at Somali Al Qaeda affiliate Al Shabaab as a leading suspect, a law enforcement source told Fox News on Wednesday.

On Tuesday, an explosion and fire blew a gaping hole in a commercial airliner over Somalia, forcing it to make an emergency landing after a passenger apparently was sucked out of the cabin, officials and witnesses said.

The Airbus A321 plane, operated by Dubai-based Daallo Airlines and headed to Djibouti in the Horn of Africa, was forced to land minutes after taking off from the Mogadishu airport, Somali aviation official Ali Mohamoud said.

Authorities in the Balcad region, about 19 miles north of Mogadishu, later said they found the body of a man believed to have been sucked out of the plane, Reuters reports.

"The dead body of the passenger is being transported to Mogadishu," a police officer at the Mogadishu airport said. "He dropped when the explosion occurred in the plane.”

Passengers have reported that after the blast at 11,000 feet, a man with burning clothes was sucked out of a hole in the fuselage.

Somalia's civil aviation director, Abdiwahid Omar, also said a person was missing after the plane landed and the body had been found, according to Reuters. The police officer said the man was around 55 years old.

Daallo Airlines confirmed Wednesday that one passenger is missing, while the Somali Aviation Authority chief said they have not yet established what caused the blast.

"I think it was a bomb," said the Serbian pilot, Vladimir Vodopivec, who was quoted by Belgrade daily Blic. "Luckily, the flight controls were not damaged so I could return and land at the airport. Something like this has never happened in my flight career. We lost pressure in the cabin. Thank god it ended well," the 64-year-old pilot said.

Vodopivec went on to say that fortunately the flight controls were not damaged, so he was able to return to Mogadishu’s airport and make an emergency landing. He also claimed authorities have told him it was most probably a bomb.

An aviation expert who looked at photographs of the hole in the fuselage said the damage was consistent with an explosive device, according to The Associated Press.

Two people were slightly injured as 74 passengers and crew of the plane were evacuated after the plane made a safe landing, Mohamoud said.

Somalia faces an insurgency perpetrated by the Somali Islamic extremist group Al Shabaab, which is responsible for many deadly attacks across the nation.

Al Shabaab -- whose name means “The Youth” in Arabic -- was forged in the years of anarchy that engulfed Somalia after warlords ousted dictator Siad Barre in 1991. Inspired by a Saudi-style Wahabi, or ultra-orthadox version of Islam, Al Shabaab now numbers an estimated 7,000-9,000 fighters.

It controlled Mogadishu, and briefly aligned Al Qaeda in 2012 in a bid to impose Shariah law on Somalia's urban centers, but infighting over tactics doomed the deadly union.

Now based in Kenya and Somalia's rural areas, Al Shabaab is on the run, but still deadly. In June 2014, Al Shabaab fighters stormed the Kenyan village of Mpeketoni, about 60 miles from the Somali border and murdered 48 people for not being Muslim. The following month, they attacked the palace of President Hassan Sheikh Mohamud in Mogadishu, and entered the heavily fortified compound before government forces killed the militants.

The deadly terror sect also was responsible in September 2013 for the infamous attack at the Westgate Shopping Center in the Kenyan capital of Nairobi, where 67 people were killed and more than 175 wounded.

The group has publicly vowed to carry out terror attacks in Kenya in response to that country’s military actions in Somalia, and appears to be making another move into the Somali capital.

Security at the Mogadishu airport is normally extremely tight as the terror group controls territory within sight of the airport and under the flight path for departing aircraft, sources in the area told Fox News.

The security is provided by the Somalis, along with assistance from Turkish authorities who manage the airport, the U.N. and African Union, and American advisors, working clandestinely, the source said.

Awale Kullane, Somalia's deputy ambassador to the U.N. who was on board the flight, said on Facebook that he "heard a loud noise and couldn't see anything but smoke for a few seconds."

When visibility returned they realized "quite a chunk" of the plane was missing, he wrote.

Kullane, who was going to Djibouti to attend a conference for diplomats, also posted a video showing some passengers putting on oxygen masks inside the plane. The post was later removed from his Facebook page.

"We don't know a lot, but certainly it looks like a device," said

John Goglia, a former member of the U.S. National Transportation Safety and aviation safety expert. There are only two things that could have caused a hole in the plane that looks like the one in photos circulated online — a bomb or a pressurization blowout caused by a flaw or fatigue in the plane's skin, said Goglia.

The photos appear to show black soot around the aircraft skin that is peeled back, said Goglia. A pressurization blowout wouldn't create soot, but a bomb would, he said.

Also, information about the event posted online indicate it took place during the takeoff phase of flight before the plane reached 30,000 feet, where there is maximum pressurization, Goglia said.

That makes the case for a pressurization blowout even less likely, he said.

Another passenger, Mohamed Ali, told The Associated Press that he and others heard a bang before flames opened a gaping hole in the plane's side.

"I don't know if it was a bomb or an electric shock, but we heard a bang inside the plane," he said.

On Dec. 11, 1994, a bomb blew a 2-foot hole in the floor leading to the cargo hold of a Philippine Airlines jetliner with 293 people aboard, but the pilot was able to make a safe emergency landing. One passenger was killed and 10 others were injured on the Manila-to-Japan flight.

The plane was flying at about 33,000 feet when the blast occurred. The flight landed about an hour later at Naha airport on Okinawa in southern Japan.

Ramzi Yousef, who was sentenced to life in prison for the Feb. 26, 1993 World Trade Center bombing in New York, was convicted in the bombing of the Philippine Airlines flight.