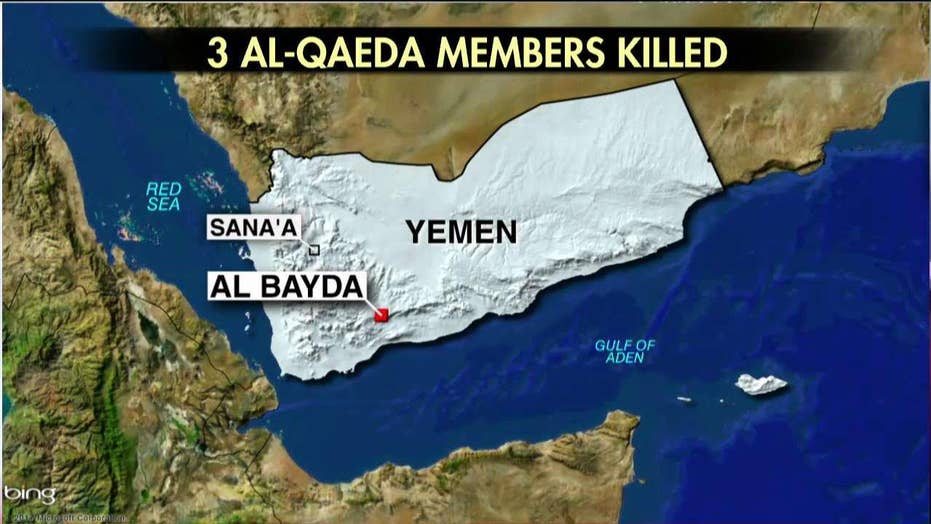 US soldier killed in Yemen

A member of U.S. Navy SEAL Team Six was killed and three others were wounded in a raid against a group of senior Al Qaeda leaders in central Yemen, officials said.

The U.S. Central Command said in a statement Sunday that another service member was injured in a "hard landing" in a nearby location. An MV-22 Osprey aircraft used in the raid was unable to fly afterward and "was then intentionally destroyed in place."

"Americans are saddened this morning with news that a life of a heroic service member has been taken in our fight against the evil of radical Islamic terrorism," President Trump said in a statement. "The sacrifices made by the men and women of our armed forces, and the families they leave behind, are the backbone of the liberty we hold so dear as Americans, united in our pursuit of a safer nation and a freer world."

A total of 14 fighters from Al Qaeda in the Arabian Peninsula were killed in the assault, and U.S. service members captured "information that will likely provide insight into the planning of future terror plots," according to the military.

“We are deeply saddened by the loss of one of our elite servicemembers,” Commander of U.S. Central Command Gen. Joseph Votel said in a statement. “The sacrifices are very profound in our fight against terrorists who threaten innocent peoples across the globe.”

The raid on Al Qaeda headquarters was the first counterterrorism offensive under President Trump aimed at gathering intelligence about the militant group, a U.S. official told Fox News. It was also first combat death under the new administration.

A U.S. official told Fox News planing for the operation began before Trump assumed office, but had not been given the green light.

American elite forces did not seize any militants or take any prisoners off-site after the raid, the official said.

The surprise dawn attack killed Abdul-Raouf al-Dhahab, Sultan al-Dhahab, and Seif al-Nims, Yemeni officials told the Associated Press. The al-Dhahab family is considered an ally of Al Qaeda, which security forces say is concentrated in Bayda province. A third family member, Tarek al-Dhahab, was killed in a previous U.S. drone strike years ago. It was not immediately clear whether the family members were actual members of Al Qaeda.

Just over a week ago, suspected U.S. drone strikes killed three other alleged Al Qaeda operatives in Bayda province in what was the first-such killings reported in the country since Trump assumed the U.S. presidency.

Al Qaeda in the Arabian Peninsula, long seen by Washington as among the most dangerous branches of the global terror network, has exploited the chaos of Yemen's civil war, seizing territory in the south and east.

The war began in 2014, when Shiite Houthi rebels and their allies swept down from the north and captured the capital, Sanaa. A Saudi-led military coalition has been helping government forces battle the rebels for nearly two years.

The Yemen branch was responsible for sending a 23-year old Nigerian on Christmas Day in 2009, known as the "underwear bomber," to try and blow up a US airline flying from Amsterdam to Detroit.

An American cleric associated with the group became the first U.S. citizen to be killed in a drone strike overseas on the order of President Obama. Anwar al-Awlaki's 16 year-old-son was killed two weeks later in a separate drone strike.

Awkaki had communicated with the Ft Hood shooter, Maj Nidal Hasan, before Hasan carried out the rampage on the US Army base killing 13 and wounding dozens more a month prior to the attempted bombing of the American airliner by the underwater bomber in 2009.