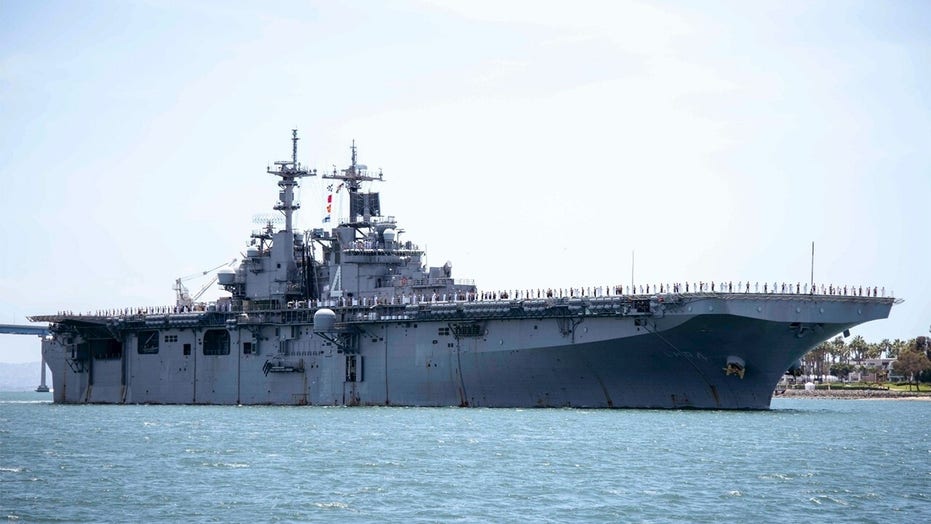 Navy adds new testing and cleaning measures after a sailor on the USS Boxer tests positive for COVID-19.

Three U.S. Navy sailors aboard the aircraft carrier Theodore Roosevelt in the Philippine Sea have tested positive for COVID-19, marking the first time the virus has spread to a U.S. warship at sea, four U.S. defense officials tell Fox News.

The new positive cases had not been reported previously.

The three sailors were medevaced, or transported by helicopter, to a Defense Department hospital in the Pacific.

There are 5,000 sailors aboard the massive warship, including thousands running the air wing and the aircraft carrier's dozens of fighter jets and other aircraft.

Asked how the positive cases would impact operations, one Navy official likened it to an aircraft crash. "You have to continue the mission," he said.

USS Theodore Roosevelt departed San Diego in January for the Western Pacific. The strike group recently sailed through the South China Sea to conduct military exercises meant to send a message to Beijing. There are six other warships in the strike group, including guided-missile destroyers.

The "Big Stick" -- as the warship is called -- visited Danang, Vietnam, earlier this month and the sailors were allowed to go ashore. It remains unclear whether the sailors contracted the virus while the carrier was docked there.

Adm. Michael Gilday told Fox News that the carrier went ahead with the port because, at the time, Vietnam had only 16 cases of infection.

It's only the second time since the Vietnam War that an American aircraft carrier has visited the country.

The three sailors had complained of "temperature and aches." Since then, the Navy has been conducting forensics on the people who had contact with the sailors onboard the 5,000-person carrier. Those people will be asked to self-quarantine, officials said.

The Navy has had testing capabilities at sea but must fly those tests to Defense Department facilities on shore for results, leading to lag time. Testings have been undertaken only when patients exhibited symptoms.

As of Tuesday, there have been 86 active cases of coronavirus in the Navy, including 57 active-duty members, 13 civilian dependents and five contractors. Navy officials said there have been no known cases on submarines.

Out of some 300 ships, about 100 are out at sea right now. Amid the coronavirus outbreak, the Navy has been conducting virtual testing and has had travel restrictions in place until May 11 -- the same guidance across the Defense Department.

NAVY SENDS CORONAVIRUS TEST KITS TO WARSHIPS IN THE PACIFIC

The USNS Mercy and Comfort will be used as referral hospitals when they arrive in Los Angeles and New York, officials said.

Some 2,200 Navy personnel are deploying with the Mercy and Comfort, both of which will be operating 24 hours after they arrive in port.

An additional 1,000 Navy personnel are on standby to help if Defense Secretary Mark Esper orders it.

One-third of Navy reserves are involved in COVID-19-related work, a figure that Gilday said "rivals what we deployed during Desert Storm" during the Gulf War.