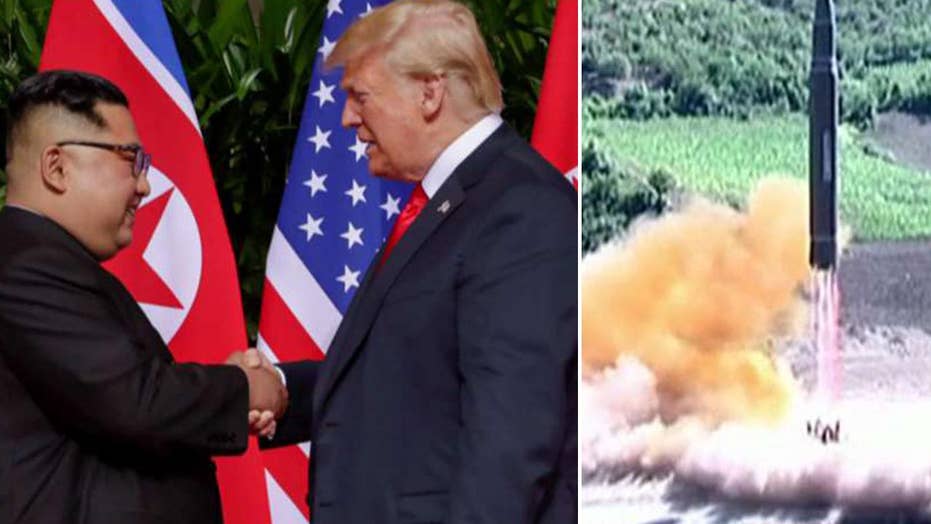 President Trump to meet with Kim Jong Un in Vietnam on February 27 and 28; Greg Palkot reports from London.

With the second summit between North Korean leader Kim Jong Un and President Trump just days away, some in Washington are advocating a renewed push to ensure that the issue of human rights is front and center.

“There is a clear nexus between human rights and national security: forced labor for the regime – labor that is likely being used as part of the missile and weapons program, and which is likely being used as a guinea pig population to test chemical and biological weapons,” asserted Olivia Enos, policy analyst for The Heritage Foundation and author of a new report titled: “Leveraging U.S. Law to Advocate for Human Rights in Talks with North Korea.”

The report underscored that “diplomacy should be tied not only to concessions on its nuclear program but to human rights improvements,” noting that forced labor serves as a financial resource for the continued development of North Korea’s rogue missile and nuclear program.

Beyond matters of U.S national security, the report also states that the U.S is obligated to enforce its own sanction laws, which were put in place under the guise of human rights concerns.

“The U.S cannot commit to lifting all sanctions if North Korea only denuclearizes and does not address human rights issues,” the report continues. “U.S. law requires Pyongyang to curtail its human rights violations before receiving certain sanctions relief. Furthermore, improvements in human rights can be used as a litmus test to determine North Korea’s sincerity in its commitment to both peace and disarmament.”

In particular, the report emphasizes that there are a number of tools already in place that have the potential to substantially ratchet up the Trump team’s pressure on the North Korean regime to make moves in the right direction. For example, the Customs and Border Patrol (CBP) in November seized over 10,000 cartons (valued at more than $200,000) of frozen squid that was processed in China, but suspected by being manufactured by North Korean labor.

The CBP welcomes more such tips for any person with information pertaining to goods imported to the U.S that may have produced under forced and illicit labor practices.

In order to receive sanctions relief, the U.S must guarantee that North Korea is “taking verified steps to improve living condition in its political prisoners.”

“Given that tools exist and laws mandate that North Korea take steps toward rectifying its human rights record, the U.S. should seek to integrate human rights into dialogue with North Korea,” Enos said. “Shortly before the Singapore Summit, the Trump Administration fell silent on human rights abuses in North Korea. The silence continues. This was shame coming on the heels of significant action – including the release of the three Americans ahead of the summit – should have emboldened U.S negotiators to raise human rights concerns with North Korea.”

According to Enos, now more than ever human rights must remain at the top of the U.S. radar if any de-nuclearization agreement is to move forward.

"What better way to reignite the conversation than to raise those concerns publically in Hanoi? Not a single U.S. sanction issued on human rights grounds can legally be lifted if North Korea only denuclearizes," she added. "Diplomacy with Pyongyang should reflect that reality by pursuing progress on both denuclearization and human rights in tandem."