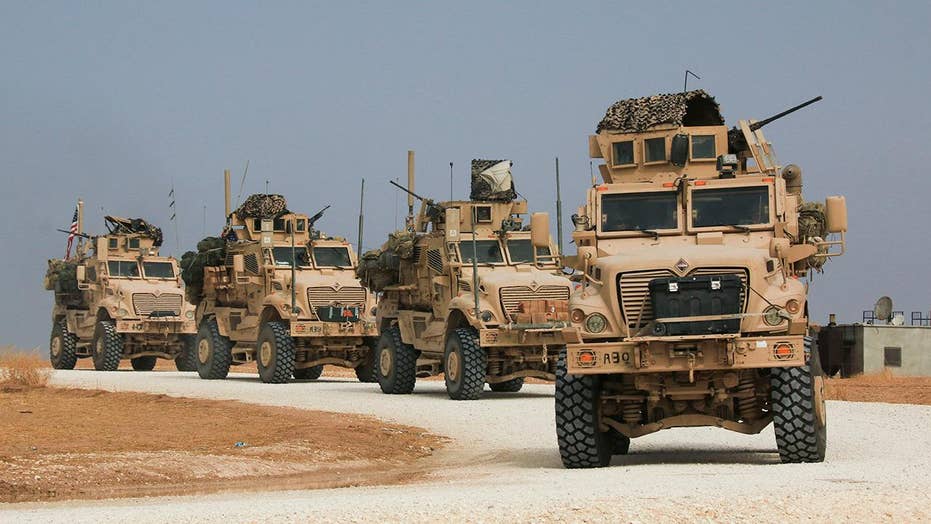 US sends troops to Syria to secure oil fields from ISIS

U.S. military forces have returned to eastern Syria weeks after President Trump ordered the complete withdrawal of American troops from the area. The move comes as the top Kurdish leader of a U.S.-backed militia accuses Turkey of “continuing its war” against the Kurds in Syria.

The Guard soldiers come from North Carolina, South Carolina, Ohio and West Virginia, according to a tweet by Col. Myles B. Caggins III, a U.S.-led coalition spokesman, in announcing the deployment.

The Guard soldiers come from North Carolina, South Carolina, Ohio and West Virginia, according to a tweet by Col. Myles B. Caggins III, a U.S.-led coalition spokesman in announcing the deployment. (@OIRSpox)

Roughly 500 Guard members will be part of the deployment to eastern Syria’s Deir ez Zor to protect the oil fields, according to officials.

A photo of the Guard unit arriving earlier this month to Kuwait were posted to a Pentagon website.

Earlier this month, the unit, including its MIAI Abrams main battle tanks, trained at Fort Bliss in Texas, according to the Pentagon:

It’s not clear if the tanks will also be deploying to eastern Syria, along with Bradley Fighting Vehicles in photos the Pentagon released when announcing the deployment to eastern Syria.

The announced deployment of more troops to Syria from the region follows a series of what some critics are calling contradictory statements from the White House over its Syria policy.

President Trump said last week in a tweet about Syria, “COMING HOME! We were supposed to be there for 30 days - That was 10 years ago. When these pundit fools who have called the Middle East wrong for 20 years ask what we are getting out of the deal, I simply say, THE OIL, AND WE ARE BRINGING OUR SOLDIERS BACK HOME, ISIS SECURED!”

But just two days prior to the tweet, in a White House speech announcing a cease-fire agreement between Turkey’s President Erdogan and U.S.-backed Kurdish fighters in northern Syria, the president said that not all U.S. troops would be coming home.

“A small number of U.S. troops will remain in the area where they have the oil,” President Trump said on Oct. 23.  “We’re going to be protecting it, and we’ll be deciding what we’re going to do with it in the future.”

“Turkey has not adhered to the ceasefire agreement with USA and is continuing its war. Turkey with Jihadists, began to occupying Christian villages and trying to break into Tall Tamir predominantly Assyriens, threatened with annihilation.  USA must fulfill its obligations.”

Protecting the oil could mean U.S. forces defending the oil not just from the 15,000 estimated ISIS fighters remains in Syria and Iraq, but from Syrian President Bashar al-Assad’s troops, Russian and Iranian-backed forces as well.

Last year, Russian mercenaries along with “pro-Assad” forces advanced near the oil fields guarded by U.S. Special Operations forces along with their Kurdish allies.  When they began taking fire, the U.S. troops called in devastating air strikes from orbiting Apache helicopter and AC-130 gunships to annihilate the Russian troops, as then-Defense Secretary Jim Mattis later characterized the engagement to lawmakers on Capitol Hill.

The president also acknowledged in a recent statement that a small number of U.S. troops would remain at a garrison in southern Syria to block a well-known smuggling route used by Iranian-backed forces to move weapons from Iran to Damascus and Beirut.  ISIS is not known to inhabit the area.

The president said U.S. troops leaving Syria would, “stay in the region,” in the days since his abrupt order to pull all American forces out of northeast Syria after speaking to his Turkish counterpart on Oct. 6. Turkey launched an invasion of northeast Syria days later.  U.S. Special Operations forces ordered to retreat from the Syrian border felt they were abandoning and betraying their Kurdish allies.  The Kurdish-led Syrian Democratic Forces (SDF) lost over 11,000 fighters battling ISIS over the past five years.

Despite President Trump wanting to pull American forces from the Middle East and end what he called “endless wars,” the Pentagon recently said just the opposite is happening.

In a statement on Oct. 11 announcing roughly 2,000 more troops would be deploying to Saudi Arabia, the Pentagon said: “Since May, the Department of Defense has increased the number of forces by approximately 14,000” to the Middle East.