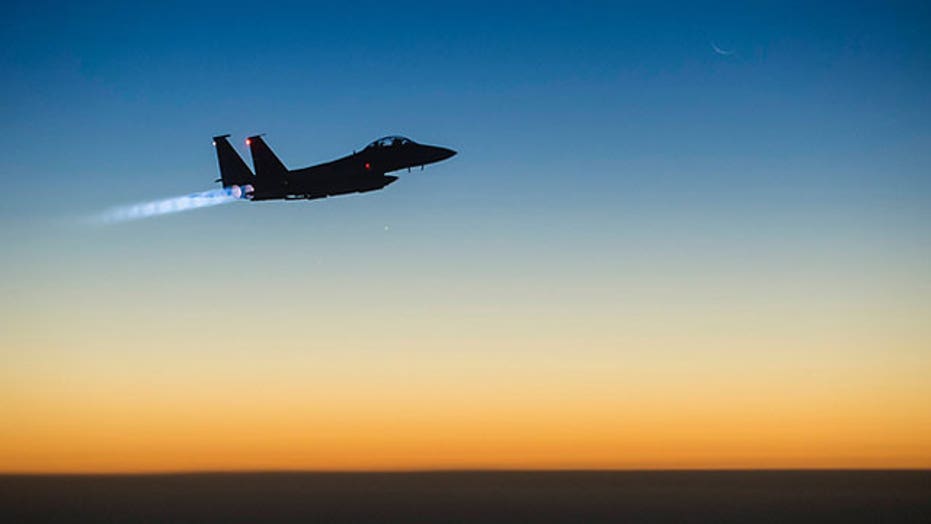 US airstrikes hit ISIS targets in 4 regions of Syria

Washington and its Arab allies opened their air assault against the extremist group last week, going after its military facilities, training camps, heavy weapons and oil installations. The campaign expands upon the airstrikes the United States has been conducting against the militants in Iraq since early August.

The Britain-based Syrian Observatory for Human Rights said coalition forces hit Islamic State group facilities overnight in Aleppo, Raqqa, Hassakeh and Deir el-Zour provinces. It said there were casualties, including civilians, but did not have exact figures.

One of the strikes hit a grain silo in the extremist-held town of Manbij in Aleppo province, setting it ablaze, the Observatory and the Aleppo Media Center activist group said. Another activist collective, the Local Coordination Committees, also reported what it said were coalition air raids on Manbij.

Observatory director Rami Abdurrahman said the strike on the grain silo killed civilians, but he didn't have an exact number.

"They killed only civilians there, workers at the site. There was no ISIS inside," he said, using an alternative name for the Islamic State group. The airstrikes "destroyed the food that was stored there."

There was no immediate comment or confirmation of the strikes from the U.S. or its allies.

In Deir el-Zour province, a strike overnight attributed to the coalition hit the entrance to the Conoco gas plant, Syria's largest, according to the Observatory.  It said the facility itself was not damaged.

More raids Monday morning struck the town of Tel Abyad on the Syria-Turkey border, according to a resident on the Turkish side on the frontier.

Mehmet Ozer told The Associated Press by telephone that the raids hit an abandoned military base and an empty school, sending pillars of smoke and dust into the air. He said Islamic State fighters cleared out of the military base about three or four months ago.

"They (the coalition) must not have fresh intelligence," Ozer said.

Two shells from the fighting on the Syrian side of the border landed on Turkish soil in the town of Suruc, an AP journalist on the frontier said. Turkey's military moved tanks away from the army post in the area, positioning them instead on a hill overlooking the border.

The Islamic State group has seized control of a huge chunk of Syria and neighboring Iraq, and has declared the establishment of a self-styled caliphate ruled by its strict interpretation of Shariah law. Its brutal tactics, which include mass killings and beheadings, have helped galvanize the international community to go after the militants.

The U.S.-led campaign aims to roll back the extremists' gains in Syria and Iraq, and ultimately to destroy the group.

Despite the international efforts, Islamic State fighters have pressed ahead with their offensive against Syria's Kurds in the city of Ayn Arab, also known as Kobani, on the Turkish border.

Ismet Sheikh Hassan, a senior official in the Kobani region for the Kurdish militia, said the extremists fired rockets and tank shells at the city from the southeast, while some 1,000 militants amassed to the west. He said a 50-year-old woman was killed by the shelling.

More than 100,000 people have fled across the border to Turkey to escape the onslaught, while the U.S.-led coalition on Saturday targeted the attacking Islamic State fighters for the first time to try to stem their advance.

The purported civilian casualties in Manbij would add to the 19 civilians that the Observatory says have already been killed in the coalition airstrikes. The Observatory gathers its information from a network of activists across Syria.

On Sunday, Human Rights Watch said that it had confirmed the deaths of at least seven civilians -- two women and five children -- from apparent U.S. missile strikes on Sept. 23 in the village of Kafr Derian in Idlib province. The New York-based group said two men were also killed in the strikes, but that they may have been militants.

It based its conclusions on conversations with three local residents.

"The United States and its allies in Syria should be taking all feasible precautions to avoid harming civilians," said Nadim Houry, deputy Middle East director at Human Rights Watch. "The U.S. government should investigate possible unlawful strikes that killed civilians, publicly report on them, and commit to appropriate redress measures in case of wrongdoing."