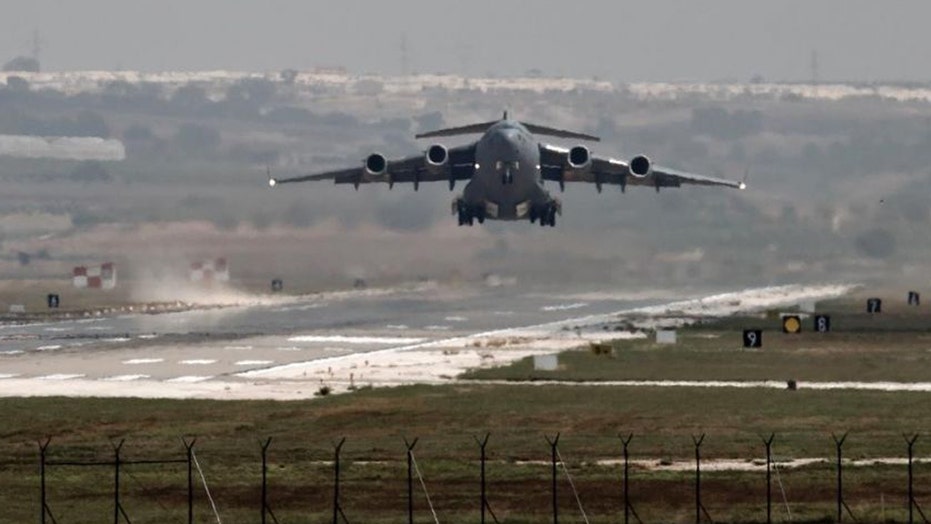 U.S. air base in Turkey shut down

Turkey reopened the airspace around Incirlik Air Base on Sunday, allowing the U.S. to restart strike missions targeting the Islamic State terror group, as the alliance between the two nations showed signs of serious strain.

Pentagon Press Secretary Peter Cook confirmed that power had been cut to the air base in southern Turkey, near the Syria border.

"U.S. facilities at Incirlik are still operating on internal power sources, but we hope to restore commercial power soon. Base operations have not been affected," Cook said in a statement.

Meanwhile, U.S. Secretary of State John Kerry spoke to his Turkish counterpart, Mevlut Cavosoglu, for the second time in as many days following the failed coup, which left at least 265 people dead and 1,400 wounded.

Despite the support for Recep Tayyip Erdogan's government by the Obama administration during the coup, the country's labor minister suggested Washington was behind the uprising. Meanwhile, Erdogan himself bluntly requested the extradition of Pennsylvania-based cleric Fethullah Gulen, whom Erdogan blamed for inspiring the coup, saying, "If we are strategic partners, then you should bring about our request."

Although he didn't outline any threat, Erdogan's emphasis on U.S.-Turkish counterterrorism cooperation raised the prospect of a prolonged closure of Incirlik if he didn't get his way.

Stung by the criticism, the State Department fired back. In a readout of the telephone call between Kerry and Cavosoglu, the department said Kerry told his fellow diplomat, "public insinuations or claims about any role by the United States in the failed coup attempt are utterly false and harmful to our bilateral relations."

Kerry reiterated U.S. support for Turkey's democratically elected government, according to the State Department readout, and urged authorities to respect the rule of law and safeguard civilian life as they respond to the coup attempt. Kerry also said Turkey needed to respect due process as it investigates those it believes were involved in the plot.

Earlier, on a visit to Luxembourg, Kerry told reporters the U.S. would entertain an extradition request for Gulen if the Turks provided evidence of wrongdoing. Erdogan has long accused Gulen, a former ally, of trying to overthrow the government, but Washington has never found the claims compelling.

"We fully anticipate that there will be questions raised about Mr. Gulen," Kerry told reporters. "And obviously we would invite the government of Turkey, as we always do, to present us with any legitimate evidence that withstands scrutiny. And the United States will accept that and look at it and make judgments about it appropriately."

A Turkish official, speaking on condition of anonymity in line with government regulations, said Turkey was preparing a formal extradition request with detailed information about Gulen's involvement in illegal activities. He said the coup attempt was seen as "one more thing to add to an already extensive list."

In a statement, Gulen said he condemned, "in the strongest terms, the attempted military coup in Turkey" and sharply rejected any responsibility or knowledge of who might be involved.

Kerry said the U.S. had no indication beforehand of the coup attempt, which began as he and Russia's foreign minister were in a Russian government villa in Moscow, locked in negotiations over Syria.

"If you're planning a coup, you don't exactly advertise to your partners in NATO," Kerry said. "So it surprised everyone. It does not appear to be a very brilliantly planned or executed event."