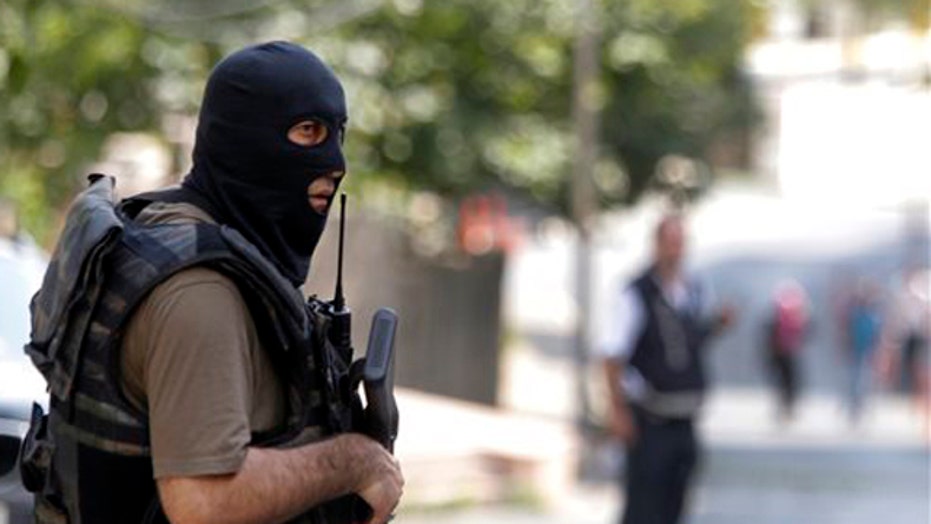 US consulate attacked in Istanbul, violence in Turkey surges

ANKARA, Turkey – Two women opened fire at the heavily protected U.S. Consulate in Istanbul Monday, while assailants exploded a car bomb at a police station then fired on police inspecting the scene, in a day of heavy violence in Turkey's largest city.

In the southeast of the country a roadside bomb killed four police, and Kurdish rebels attacked a helicopter, killing a conscript. There has been a recent sharp spike in violence between Turkey's security forces and rebels of the Kurdistan Workers' Party, or PKK, as Turkey has attacked PKK targets in Iraq in tandem with airstrikes against Islamic State militants in Syria.

One of the consulate attackers was later shot and taken into custody in a nearby building and hospitalized. The far-left Revolutionary People's Liberation Army-Front, or DHKP-C, identified her as 51-year-old Hatice Asik, and said she was a member of the group, though it did not directly claim responsibility for the attack. The DHKP-C and the PKK both have Marxist origins and have cooperated in the past, though there was no immediate indication of PKK involvement in this attack.

The second woman was still being hunted. There were no other casualties.

Hours earlier, an overnight bomb attack at a police station in Istanbul injured three policemen and seven civilians and caused a fire that collapsed part of the three-story building. The suspected bomber was killed during the explosion, according to the Istanbul governor's office.

Unknown assailants later fired on police inspecting the scene of the explosion, sparking another gunfight with police that killed a member of the inspection team and two assailants. There was no immediate responsibility claim for that attack.

Turkey last month carried out a major security sweep, detaining some 1,300 people suspected of links to banned organizations, including the PKK, the DHKP-C and extremists of the Islamic State group.

Turkey has recently started taking a more active role against IS militants. Last month it conducted aerial strikes against IS positions in Syria and agreed to let the U.S.-led coalition use its bases for its fight against IS. On Sunday, the U.S. military announced that a detachment of six F-16 fighter jets and some 300 personnel have arrived at Turkey's southern Incirlik Air Base.

In further violence Monday, Kurdish rebels in the southeastern province of Sirnak fired at a helicopter carrying conscripts who either had finished their term of duty or were taking leave, killing one of them and injuring another, the military said.  Four police were also killed in Sirnak province when their armored vehicle was attacked with a roadside bomb, the Dogan news agency reported.

In a statement posted on its website the group described the consulate attacker, Asik, as a "revolutionary" fighting American oppression and vowed to maintain its struggle until Turkey is "cleared" of all U.S. bases.

Turkey's Foreign Ministry condemned the attack and said security at U.S. missions around the country had been increased. It said Turkey was determined to fight terrorism through "cooperation and solidarity" with its NATO ally.

The U.S. Embassy said U.S. officials were working with Turkish authorities to investigate the incident. The consulate would remain closed to the public until further notice, it said.

Police wearing flak jackets and holding machine guns blocked off streets leading to the consulate. The building, which is surrounded by fortified walls, was intact and its flag was flying.

Other recent attacks by the DHKP-C have included on the headquarters of a political party and the Turkish Ministry of Justice. The group, which wants to set up a socialist state in Turkey, advocates a Marxist-Leninist ideology and opposes the U.S. and Turkish governments, as well as NATO.

In 2008, an attack blamed on al Qaeda-affiliated militants outside the U.S. Consulate in Istanbul left three assailants and three policemen dead.