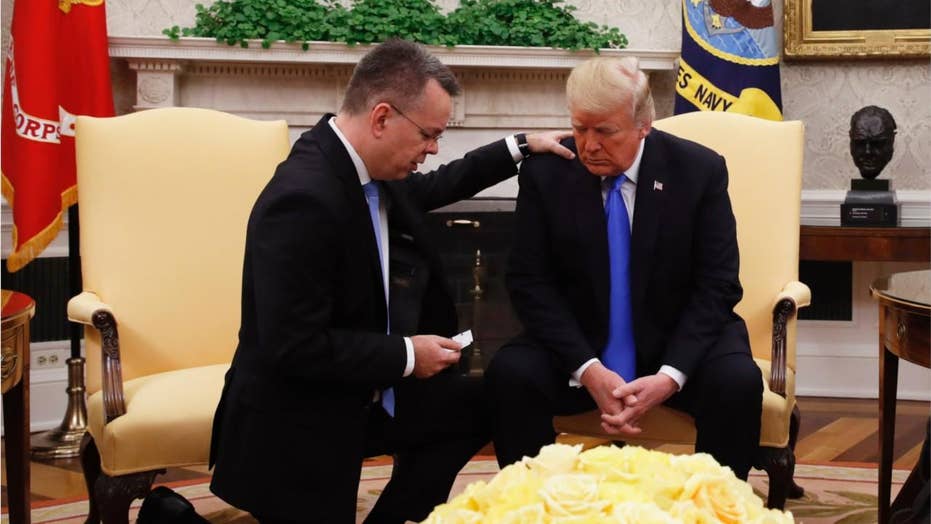 A U.S. citizen who was detained by the Syrian regime has been released in a deal brokered by the Lebanese government, a Beirut security official announced Friday.

The person has since been identified as 30-year-old Sam Goodwin. Although it remains unclear why he was in the conflict-riddled nation, one source in Beirut told Fox News he intended to visit every country. Despite some tweets looking for information as to his location in late May, the case was kept low-profile and out of the media glare over the past two months.

The citizen has been returned to his family, according to Reuters.

One source who works closely with the White House on hostage matters also noted that it is believed that there are at least three Americans, including former U.S. Marine turned photojournalist Austin Tice, who are likely still being held by the Assad regime. One includes a medical professional and in late May it was rumored that a U.S. citizen was taken from a hotel by regime forces in the Kurdish-dominant area of Qamishli, but his disappearance was never verified.

The U.S. State Department spokesperson told Fox News on Friday that while privacy considerations prevent them for commenting further on the case, they "are aware of reports that a U.S. citizen was released in Syria."

Another source who works closely with the White House on hostage matters also noted that it's believed that there are at least three Americans, including Tice, likely held by Bashar Assad's (pictured) regime. (Facebook)

While details on Goodwin's case are yet to be made clear, analysts and experts alike have widely praised the Trump administration’s efforts to release U.S. citizens from unlawful detention by state and non-state actors.

To date, at least 21 hostages held abroad have been freed throughout Trump’s first term. They range from a former CIA officer, Sabrina de Sousa, who was held in Portugal for more than 18 months at the request of Italian prosecutors and an Egyptian-American charity worker Aya Hijazi who was imprisoned in Cairo for three years. Then there was American businesswoman Sandy Phan-Gillis who was released from China, and Caitlin Coleman and her family her were discharged by the Haqqani network in the Pakistan-Afghanistan area in 2017.

“What has changed under the Trump administration is the level of personal interest and engagement from the President. Trump has made it clear that he views the return of American hostages as a priority and regularly touts his success,” Joel Simon, the executive director of the Committee to Protect Journalists (CPJ) and author of “We Want to Negotiate: The Secret World of Kidnapping, Hostages and Ransom,” told Fox News. “The hostage families I speak with appreciate the attention the President gives the issue, but some policy experts worry that the same attention could increase the risk by making clear the potential value of American hostages.”

Indeed, there are still many more U.S. citizens that need to be brought home, although Washington does not release exact numbers as to how many Americans are being unlawfully held abroad.