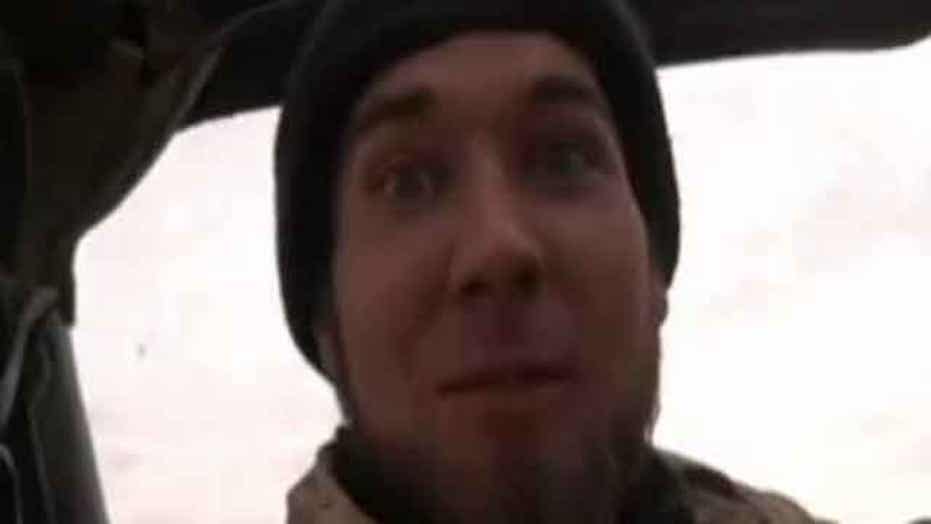 He's a U.S.-trained soldier turned Muslim warrior who moves between America and countries where the winds of the Arab spring blow, fighting alongside jihadists and America-hating terrorists while celebrating his bloody exploits on YouTube videos.

Eric Harroun, 30, grew up in Phoenix before joining the U.S. Army in 2000. Although Harroun was never deployed during his three-year hitch, he has seen plenty of combat fighting with Syrian rebels and, more recently, Jabhat al-Nusra, a group the U.S. State Department classifies as an alias for Al Qaeda in Iraq.

“I was separated in a battle and most of my group was K.I.A. and Al-Nusra picked me up,” Harroun told FoxNews.com during one of several brief interviews conducted via Skype.

Harroun, who said he is now in Turkey, shrugged off a question about fighting alongside Al Qaeda terrorists who have joined the Syrian rebellion, saying, "the U.S. plays both sides, too." He said the offshoot of the terror group behind the 9/11 attacks welcomed him.

“Getting into Al-Nusra is not rocket science," he said. "It just takes balls and brains.”

Harroun, known among Syrian rebels and loyalists alike as “The American,” has moved from one country to another, joining protesters in the takedown of Egyptian President Hosni Mubarak before fighting alongside rebels attempting to depose Syria’s Bashar al-Assad. A prolific poster of online diatribes against the infidel, he's joined the threads of those calling for the deaths of Zionists.

His father, Darryl Harroun, told FoxNews.com that his son was discharged from the Army after he was seriously injured while riding in a pickup truck that hit a tree. He was left with full disability pay and a steel plate in his head, according to his father.

"Now he has mood swings and what-not," said Darryl Harroun, who lives in Arizona and talks to his son by phone frequently. "He was already suffering from depression before that, and the accident just kind of multiplied it."

Darryl Harroun said his son is seen as an adventurer by friends and relatives, who call him "Arizona Jones."

"He just loves that part of the world," said Darryl Harroun, who said his family has been in the U.S. for several generations and is not Muslim. "We scratch our heads and wonder what the hell he's doing. I told him, 'You're never going to change those people's minds over there.' But he says they treat him like a hero.

"I know one day I'm going to get a message from over there, telling me my son is dead," he said.

Darryl Harroun said he doesn't believe the U.S. -- much less his own son -- has any business in Middle Eastern affairs. But at least one family member seems to believe Harroun is fighting a noble battle.

"Keep fighting Eric!" Harroun's sister, Sarah Harroun, posted on Facebook this week. "The people of Syria and you are in my prayers."

Harroun's descent into Islamic fanaticism seems to have begun sometime after his discharge from the military. With seemingly no way to pursue his lifelong dream of being a soldier, he fell in with two Iraqi brothers, Maadh and Hayder Ibrahim, who he met while attending Pima Community College in Tucson, and began to identify himself as a Muslim, according to people who know him.

He became active on anti-Israeli message boards, posting virulent rants against Zionism as well as his own uploaded images and videos.

A spokesman with the Syrian rebel group known as the Amr ibn al-’Aas Brigade told FoxNews.com “The American” operated with the organization until a month ago. Harroun confirmed reports from the Amr ibn al-'As brigade that he had left Syria, and said he is currently in Istanbul.

Harroun is believed to have worked for a Phoenix-based mortgage company after leaving the military. Officials and co-workers there declined to discuss Harroun, whose online posts indicate he has traveled to and from the Middle East at least a half-dozen times over the last decade.

Army spokesman Ray Gall confirmed that Harroun served in the Army's 568th Engineer Company and was based at Fort Riley, Kansas, from October 2000 to May 2003, attaining the rank of Private First Class before his discharge. Gall declined to provide any details regarding Harroun's discharge.

In Syria, Harroun has become so well known that a pro-regime video was created claiming that “The American” is a “criminal from Miami.” A mugshot and rap sheet are provided as proof of Harroun’s criminal past, but the picture in the video does not resemble Harroun.

In recent months, Harroun has appeared in several online videos alongside Syrian rebels fighting in Damascus. Described in his Facebook profile as a Sunni Muslim, Harroun has posted in several threads claiming to have personally killed several Shabiha (supporters of the Assad regime), Syrian soldiers and an Iranian.

“I hate bad guys like Bashar [Assad]," Harroun told FoxNews.com. "I hate Iran, too. I am a freedom fighter."

In one video posted online, Harroun is seen on the Syrian battlefield, speeding toward a downed helicopter in a Jeep detailed with a Free Syrian Army emblem on its windshield. Harroun told FoxNews.com the video was shot at a place called Mansura in eastern Syria.

In the video, Harroun and a driver he addresses in Arabic as “The Chechen” ride toward the downed Syrian helicopter.

The FSA is a conglomerate of militia-style groups and former Syrian military personnel, according to Rafael Green, a research fellow at the Middle East Media Research Institute. Green said the FSA cooperates with groups such as Jabhat al-Nusra, and is not particular about who takes up its cause

For Harroun, who claims to have been arrested twice by Egyptian security forces in 2011 and traveled extensively in Lebanon and Turkey, the war in Syria seems to be an opportunity to kill in the name of a cause. He said Israel may be next on his agenda -- specifically the Palestinian territories -- citing “atrocities” that “Israel is doing to the Palestinians.

"Maybe Gaza is next for me, maybe [the] West Bank," said Harroun, whose Facebook wall bears the quote: “The only good Zionist is a dead Zionist.”

Greg Tepper is a freelance journalist based in Israel. Ilan Ben Zion (@ilanbenzion) is a reporter for the Times of Israel.