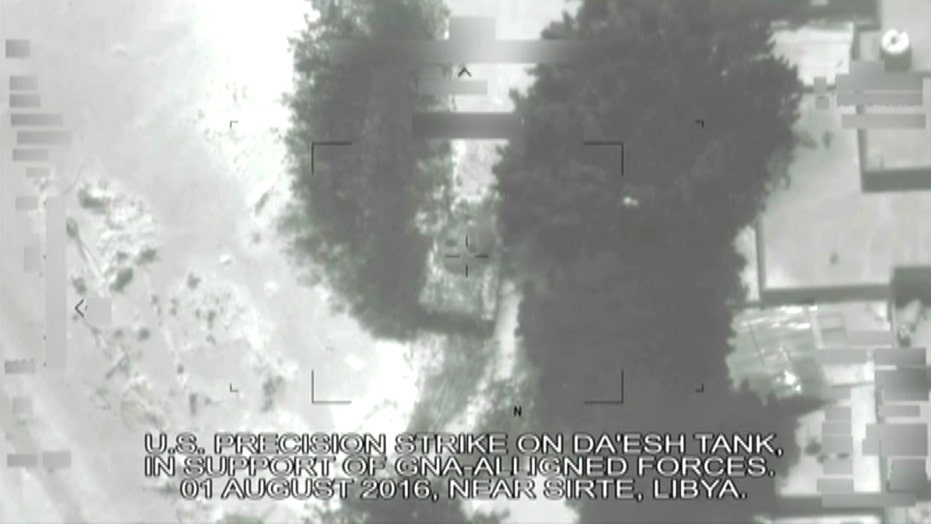 First footage of US airstrike in new anti-ISIS Libya mission

The U.S. military has ramped up airstrikes against the Islamic State in Libya--doubling the number of strikes there in less than a month--according to the latest statistics provided by the U.S. military's Africa Command, which leads the operation.

As of Monday, there have been 324 airstrikes in Libya, a majority from drones and others from U.S. Marine Corps jets and attack helicopters stationed aboard a US Navy warship off the Libyan coast.

The U.S. military has been carrying out airstrikes in Libya since August 1, in support of the UN-backed Government of National Accord, or GNA based in Tripoli.

The U.S. airstrikes have been focused on a concentration of ISIS fighters located in the Libyan coastal city of Sirte, located halfway between Tripoli and Benghazi. At the start of the bombing campaign, a Pentagon spokesman said the U.S. operation would only last a matter of "weeks."

"We continue to work with GNA [Government of National Accord] aligned forces as they clear through Sirte and we now have better intelligence, " said a U.S. defense official, who spoke to Fox News on the condition of anonymity when asked about the sharp increase in the number of airstrikes.

Extending the bombing campaign through October meant the Navy had to keep two warships off the coast of Libya for a third consecutive month, according to defense officials. Drone strikes, which provide a majority of the strikes were also extended. The initial plan called for the two warships to remain off Libya for one month only.

One of the U.S. warships, the amphibious assault vessel USS Wasp, which houses dozens of Marine Corps Harrier jets and Cobra attack helicopters, had been scheduled to go to the Persian Gulf in September to begin airstrikes against ISIS in Iraq and Syria, as well as keep an eye on Iran following recent incidents involving Iranian gunboats and U.S. Navy ships -- one of which resulted in warning shots being fired by a U.S. warship. The other, the destroyer USS Carney, was supposed to head to the Black Sea near Russia. But the Libya operation against ISIS has been deemed more pressing by senior military leaders.

The U.S. military is now conducting airstrikes against terror groups in six countries: Iraq, Syria, Libya, Afghanistan, Yemen and Somalia.  In May, the US military carried out a drone strike in a seventh country, Pakistan, to kill the head of the Afghan Taliban, Mullah Akhtar Mansour.

The USS Wasp is serving as a key launch point for U.S. airstrikes in Libya. The USS Carney is serving as an escort ship and firing illumination rounds from its 5-inch gun to help a U.S.-backed Libyan ground force in Sirte.

In addition to the airstrikes, U.S. special operations forces have been in and out of Libya for months advising local ground forces, according to defense officials.

When the Libya airstrikes began, a Pentagon spokesman said the strikes would only back ground the UN-backed Libyan government for a “finite” period of time and did not anticipate a long commitment.

“The duration of this operation will be measured based upon the length of time it takes for them to do that objective,” Capt. Jeff Davis said during a Pentagon briefing with reporters in early August.

The mission will likely take “weeks not months,” Davis said.  “This is a finite period of time and a very finite mission ... We don’t envision this as being something that’s going to be too long,” he said.

Speaking at the White House in August, President Obama said supporting the Libyan government against ISIS was in “America's national security interests.”

A month ago, the number of ISIS fighters in Sirte had been estimated to be “under 100,” according to a U.S. official with knowledge of the latest intelligence.

The official said at the time that U,S, military operations in Libya could be ending soon. “It’s very close. ISIS is only in three neighborhoods [in Sirte],” the official added.

In February, the US military bombed an ISIS training camp outside Tripoli in western Libya, killing a senior ISIS operative and 49 ISIS fighters.

In November, a US airstrike killed the then-head of ISIS in Libya, Abu Nabil, an Iraqi national and longtime Al Qaeda operative.