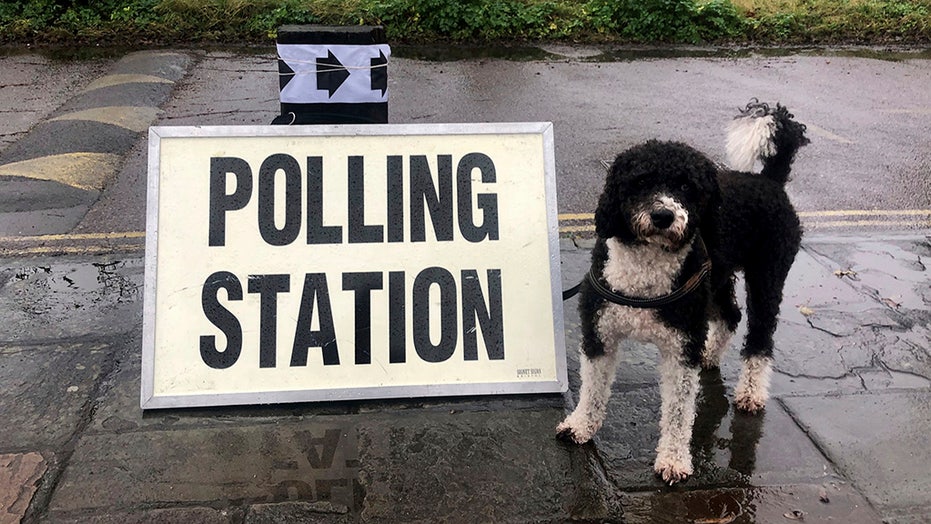 Voters head to polls for critical election in UK

Thursday is election day in the United Kingdom — and constituents were making sure their furry four-legged friends get in on the action.

Using the trending Twitter hashtag "#dogsatpollingstations," voters were showing up to the polls Thursday with their best pals posting photographic evidence of the experience on social media.

Henry the labradoodle, pictured here waiting outside a polling station in Bristol, England, on Thursday is one of many pups joining their owners as they vote in Britain's general election. (Claire Hayhurst/PA via AP)

"Forget politics, this is the main reason to log onto Twitter today," one Twitter user joked. "Delighted to announce there were dogs at my polling station this morning," another tweeted.

Prime Minister Boris Johnson, of the Conservative Party, joined in on the fun when he brought his dog, a Jack Russell cross named Dilyn, to vote with him in London.

Sadiq Khan, the Labour Party's mayor of London, also brought his pooch named Luna to the polls and posted a video online encouraging people to vote.

Some dogs went to the polls dressed up — in fun costumes from a bumblebee to Santa Claus — while other dogs' owners announced who they were voting for online.

It was not immediately clear how many dogs actually got inside voting booths. According to the electoral commission's rules, animals, "apart from assistance dogs, are not usually allowed inside polling stations so will need to be secured outside if you do decide to take them with you."

It's not clear how many dogs actually got inside voting booths, as the electoral commission says only assistance dogs are typically allowed inside. (AP Photo/Scott Heppell)

It is hoped Thursday's election, which is being held more than two years ahead of schedule, will break Britain's political impasse over Brexit and determine its future relationship with the European Union. Additionally, all 650 seats in the House of Commons seats are up for grabs.