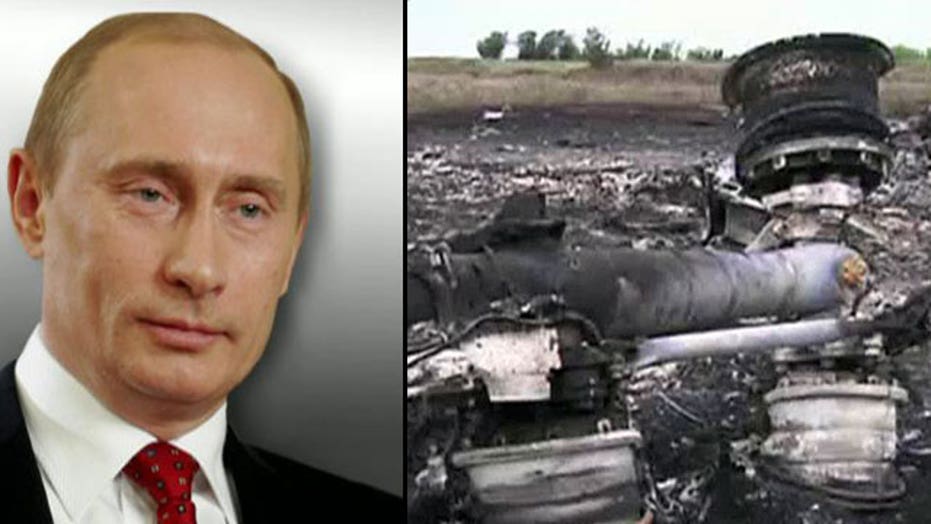 SHAKHTARSK, Ukraine – Heavy fighting raged Monday around the Malaysia Airlines debris field, once again preventing an international police team charged with securing the site from even getting there.

Government troops have stepped up their push to win back territory from pro-Russian separatists in fighting that the United Nations said Monday has killed more than 1,100 people in four months.

The international delegation of Australian and Dutch police and forensic experts stopped Monday in Shakhtarsk, a town around 20 miles from the fields where the Boeing 777 was brought down.

Sounds of regular shelling could be heard from Shakhtarsk and residents were seen fleeing town in cars.

Associated Press reporters saw a high-rise apartment block in Shakhtarsk being hit by at least two rounds of artillery.

The mandate of the police team is to secure the currently rebel-controlled area so that comprehensive investigations can begin and any remaining bodies can be recovered.

The second cancelled site visit over two days has strained tempers among the observation team.

"There a job to be done," said Alexander Hug, the deputy head of a monitoring team from the Organization for Security and Cooperation in Europe. "We are sick and tired of being interrupted by gunfights, despite the fact that we have agreed that there should be a ceasefire."

The Defense Ministry says Ukrainian troops have entered Shakhtarsk, although checkpoints blocking the western entrance into town remain under rebel control. It also said fighting was taking place in Snizhne, which lies directly south of the crash site, and in other towns in the east.

The self-declared Donetsk People's Republic said on its official Twitter that fighting was ongoing in the village of Rozsypne, where some of the wreckage still lays strewn and uncollected.

The head of the rebel's military headquarters, Igor Ivanov, told Russian state news agency RIA-Novosti that the village had fallen into government hands, but that information could not immediately be confirmed.

Ukraine has accused rebels of tampering with evidence at the plane crash site and trying to cover up their alleged role in bringing the Malaysia Airlines jet down with an anti-aircraft missile.

Separatist officials have staunchly denied responsibility for shooting down the airliner and killing all 298 people onboard.

A Ukrainian security spokesman said Monday that data from the recovered flight recorders shows Malaysia Airlines Flight 17 crashed due to a massive, explosive loss of pressure after being punctured multiple times by shrapnel. Andrei Lysenko said the plane suffered "massive explosive decompression" after it was hit by fragments he said came from a missile.

The data recorders were sent to experts in Britain for examination.

In their campaign to wrest control over more territory from separatist forces, Ukraine's army has deployed a growing amount of heavy weaponry. Rebels have also been able to secure large quantities of powerful weapons, much of which the United States and Ukraine maintain is being supplied by Russia.

While Russia and Ukraine trade accusations, the death toll has been mounting swiftly.

The U.N. High Commissioner for Human Rights said in a report out Monday that at least 1,129 people have been killed between mid-April, when fighting began, and July 26. The report said at least 3,442 people had been wounded and more than 100,000 people had left their homes. A U.N. report from mid-June put the death toll at 356.

Navi Pillay, the U.N.'s top human rights official, also called for a quick investigation into the downing of the plane, which she said may be a war crime.

At least eight civilians were killed by fighting and shelling in two cities held by separatist militants overnight Sunday, officials in the rebellion-wracked region said.

Authorities in Luhansk said that five people were killed and 15 injured by overnight artillery strikes. Three were killed in Donetsk as a result of clashes, the city's government said.

Meanwhile, a government-supported volunteer battalion said in a statement Monday that it lost 23 soldiers during fighting in a town called Lutuhyne, which is just south of Luhansk.

The U.N. said in its report that rebel groups continue to "abduct, detain, torture and execute people kept as hostages in order to intimidate" the population in the east. It said rule of law had collapsed in the rebel-held areas and that 812 people had been abducted in the Donetsk and Luhansk regions since mid-April.

It also reported heavy damage to electrical, water and sewage plants and estimated the costs of rebuilding at $750 million -- money the government would have to find by cutting social programs.

The U.S. State Department on Sunday released satellite images that it says back up its claims that rockets have been fired from Russia into eastern Ukraine and heavy artillery for separatists has also crossed the border.

Russia's Defense Ministry spokesman Igor Konashenkov on Monday dismissed the images as fake. He said in a statement carried by the Russian news agencies that the satellite images released by the U.S. State Department can't serve as a proof because they lack precise locations and their resolution is too low.

A four-page document released by the State Department appears to show blast marks from where rockets were launched and craters where they landed. Officials said the images, sourced from the U.S. Director of National Intelligence, show heavy weapons fired between July 21 and July 26 -- after the July 17 downing of Malaysia Airlines Flight 17.

The images could not be independently verified by The Associated Press.

In a possible indication of sagging morale within the rebels' ranks, the deputy leader of the so-called Donetsk People's Republic announced Monday that his immediate superior, Alexander Borodai, had left for Russia.

Viktor Antyufeyev, who is a Russian national like Borodai, said he will take over as the separatist government's acting prime minister.