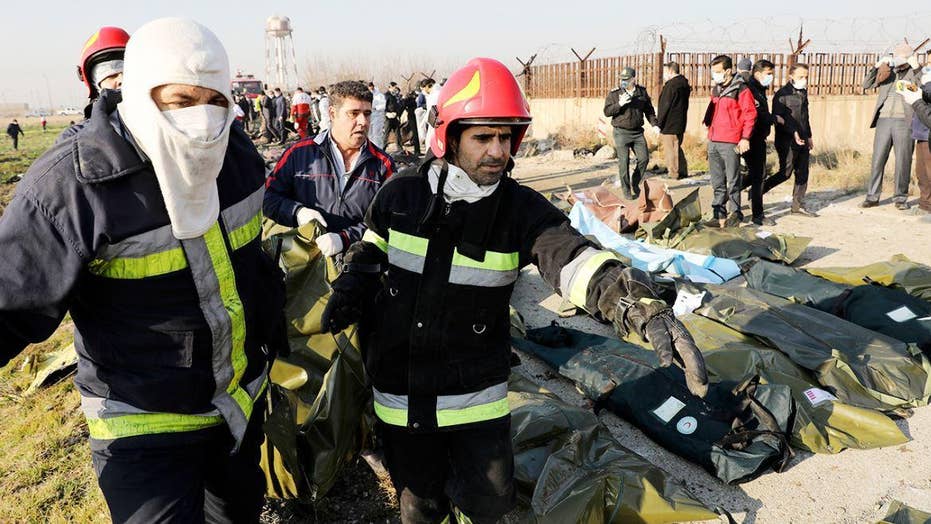 The Ukrainian passenger plane that crashed in Iran on Wednesday was apparently shot down by mistake by an Iranian anti-aircraft missile, joining a grim list of doomed flights during times of conflict.

The Ukraine International Airlines Flight PS752, bound for the country's capital of Kiev, crashed just minutes after taking off from Imam Khomeini International Airport in Tehran, killing all 176 people aboard.

COMPLETE COVERAGE OF THE TENSIONS IN IRAN

As unthinkable as shooting down an airliner with hundreds of passengers is, it has happened before. Here are some notable cases in recent decades.

In this July 17, 2014 file photo, people walk amongst the debris at the crash site of a passenger plane near the village of Grabovo, Ukraine. (AP Photo/Dmitry Lovetsky)

All 298 passengers and crew onboard flight Malaysia Airlines Flight 17 from Amsterdam to Kuala Lumpur are killed when a missile shatters the Boeing 777 midair, sending debris and bodies raining down onto farms and fields of sunflowers of eastern Ukraine.

The jet in 2014 was shot down by a Soviet-made missile over rebel-held eastern Ukraine, about 25 miles from the Russian border, where fighting had been raging for months between Ukrainian forces and Russian-backed separatists. Last year, an international investigation team named four suspects in the downing of the aircraft in that 2014 incident.

The Buk missile system that downed MH17 is a sophisticated but difficult to operate system, Larry Johnson, a former CIA official with counterterrorism experience told The Associated Press in 2014. It was not yet known what type of missile system may have been involved in the latest incident in Iran.

"The Buk uses a radar acquisition system for targeting," Johnson said at the time. "These aren't highly trained FAA air traffic controllers. You're tracking something on radar, you see a dot, you get confused."

An errant surface-to-air missile fired by the Ukrainian military during exercises in the Crimea causes the crash of an Air Siberia airliner en route from Tel Aviv to Novosibirsk. All 78 people on board were killed when the aircraft crashed into the Black Sea.

Yevhen Marchuk, the head of the Ukrainian security council and a member of the commission investigating the tragedy, said at the time the aircraft was "an unintentional hit by an S-200 missile during the Ukrainian air defense exercises," The Guardian reported at the time.

Former airline captain JP Tristani discusses what may be learned from the wreckage of the deadly Boeing 737 crash.

Rebels in eastern Congo shoot down a Congo Airlines passenger jet carrying 40 people. The plane crashes into a densely forested area just outside of Kindu, located about 620 miles east of Kinshasa.

Abkhazian rebels in Georgia shoot down a passenger plane, killing 80. A day earlier, 28 died when a Russian Tu-134 was hit by Abkhazian fire and crashed into the Black Sea, the AP reported at the time. The incidents happened in a week of fighting between government defenders and Abkhazian separatist rebels.

The cruiser USS Vincennes, operating in the Persian Gulf following naval activity there between the two countries, mistakes Iran Air Flight 655 as being an Iranian F-14 fighter jet and shoots it out of the sky. The U.S. said at the time the Navy made 11 radio warning calls on different frequencies before the Vincennes fired two missiles at the airplane, bringing it down and killing all 290 aboard.

About ten thousand Iranians attend a 'Death to America' rally that was also the funeral for 72 of the 290 passengers and crew members killed aboard Iranian Air Flight 655 in 1988. (AP)

Sept. 27, 1983: A Soviet mini-submarine used to search for debris from Korean Air Lines Flight 007, shot down Sept. 1, 1983 near Sakhalin Island, rests on the deck of a conventional tender vessel in Nevel'sk, Sakhalin Island, in the East Sea off Russia. (AP)

The KAL plane with 269 people on board had flown off course and into Soviet airspace west of Sakhalin Island. The Soviets never compensated any of the passengers' families but years later, families in the U.S. won settlements and jury awards against Korean Air that ranged up to $10 million, the AP reported at the time.

The incident helped lead to the commercial release of GPS for civilian use, including aviation, according to the AP. The technology was developed by the U.S. military.

An off-course South Korean jetliner carrying 110 people was fired upon by a Soviet MiG fighter and forced to crash land on a frozen lake near Murmansk, killing two passengers.

“I felt we were going to die, die, die,” one woman told the New York Times after the incident. The pilot reportedly threw the aircraft into a sharp dive,  plunging from 35,000 to 3,000 feet in five minutes.

The crash in the frozen wasteland of northwestern Russia resulted in the crew being detained until they were forced to apologize for the incident.

Libyan Airlines Flight 114 en route from Tripoli to Cairo traveled off course, crossing the Suez Canal into airspace over the Israeli-held Sinai Desert. Israel claimed at the time the plane refused to identify itself and two Air Force Phantom jets fired at it to force it to land, according to the AP. The aircraft later went out of control and crashed, killing 108 people. There were five survivors.