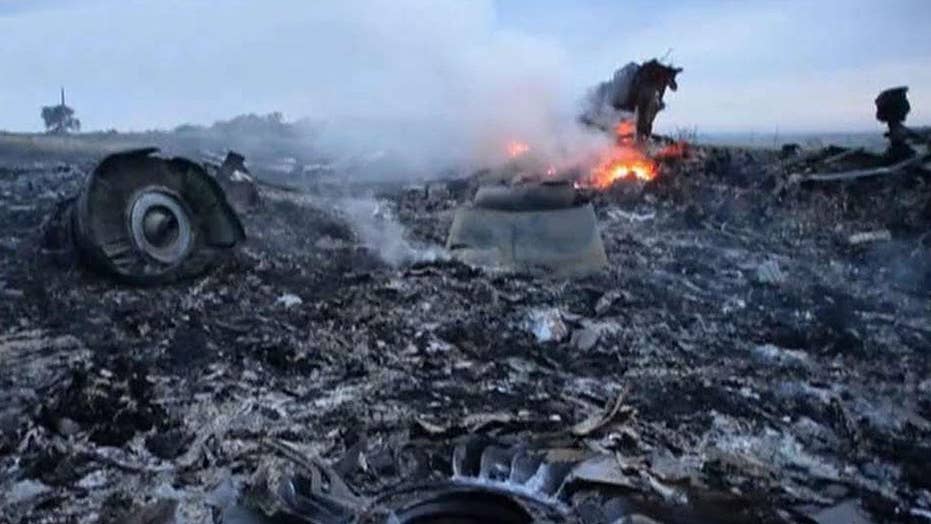 Three Russians, one Ukrainian charged with murder over downing of MH17 flight

An international investigation team named four suspects Wednesday in the downing of Malaysia Airlines Flight 17 in eastern Ukraine in 2014 that left nearly 300 dead, saying the quartet will be tried for murder in a case set to start in March.

All 298 passengers and crew on board flight MH17 from Amsterdam to Kuala Lumpur were killed on July 17, 2014, when a missile shattered the Boeing 777 midair, sending debris and bodies raining down onto farms and fields of sunflowers. The jet was shot down by a Soviet-made missile over rebel-held eastern Ukraine, about 25 miles from the Russian border, where fighting had been raging for months between Ukrainian forces and Russian-backed separatists.

Russians Igor Girkin, Sergey Dubinskiy and Oleg Pulatov, and Ukrainian Leonid Kharchenko are named as suspects in the downing of MH17 over eastern Ukraine in 2014. (APTN)

"Four people are going to be held accountable for bringing the deadly weapon to the eastern Ukraine," he said.

The investigation team, made up of detectives and prosecutors from the Netherlands, Malaysia, Australia, Belgium and Ukraine, last year said that it was convinced that the Buk missile system used to shoot down flight MH17 came from the Russian army's 53rd Anti-Aircraft Missile brigade, based in the Russian city of Kursk.

Westerbeke said the suspects are to have "cooperated closely" to obtain the missile system used to down the plane and position it at the launch site. The three Russian suspects are believed to be living in Russia, while the Ukrainian suspect is thought to be in eastern Ukraine.

While the suspects have been named, Dutch Police Chief Wilbert Paulissen admitted that investigators will not be requesting the extradition of the four suspects, because the constitutions of Russia and Ukraine do not allow for their nationals to be extradited for criminal charges. He still made an appeal for cooperation between the countries, according to Sky News.

The Dutch police chief added that more suspects could be added at a later date, including those "higher up the chain of command."

Westerbeke also blasted Russia over its failure to aid the investigation, saying it was a "slap in the face" to the families of those who died.

In this Thursday, July 17, 2014 file photo, a man walks amongst the debris at the crash site of a passenger plane near the village of Hrabove, Ukraine. (AP Photo/Dmitry Lovetsky)

"We have established that there has been involvement of the Russian Federation because they made available the missile that was used to shoot down MH17," he told reporters. "The Russian Federation has not disclosed anything that happened and that is a slap in the face for all the relatives of the victims, and I call out to them to start co-operating."

One of the named murder suspects in the downing of the aircraft, Igor Girkin, denied that Ukrainian separatists shot down the plane, telling the Associated Press "the insurgents did not shoot it down."

Girkin, a Russian national, was military chief of the Russia-backed rebels in the area at the time and was named by the investigators on Wednesday as one of the key suspects.

Russian national Alexander Borodai, who was rebel leader in Ukraine's Donetsk region in 2014 when the plane went down, told the AP that he knows that the accusations leveled against the rebels are untrue.

The Dutch police also presented a wiretap of an alleged conversation between Borodai and senior Kremlin official Igor Surkov in which they discuss military aid for the separatists. Borodai on Wednesday denied that did this, calling the released wiretap a "fake."

FILE - In this July 17, 2014 file photo, people walk amongst the debris at the crash site of a passenger plane near the village of Grabovo, Ukraine. (AP Photo/Dmitry Lovetsky)

Kremlin spokesman Dmitry Peskov said on Wednesday that Moscow did not trust the investigation,  saying "Russia was unable to take part in the investigation despite an interest right from the start and trying to join in."

The families of those killed were informed of the trial date early Wednesday at a closed-door meeting ahead of a news conference by investigators.

Silene Fredriksz-Hoogzand, whose son Bryce was among the dead, expressed relief that five years after the plane was blown out of the sky above conflict-torn eastern Ukraine, a trial could finally start.

Silene Fredriksz-Hoogzand's son Bryce and his girlfriend, Daisy Oehlers, were among 298 passengers and crew killed when the flight from Amsterdam to Kula Lumpur was shot down over eastern Ukraine on July 17, 2014. (AP Photo/Mike Corder)

"This is what we hoped for," Fredriksz-Hoogzand told the AP. "This is a start of it. It is a good start."

She added that she did not expect any of them to appear for the trial, due to begin on March 9.