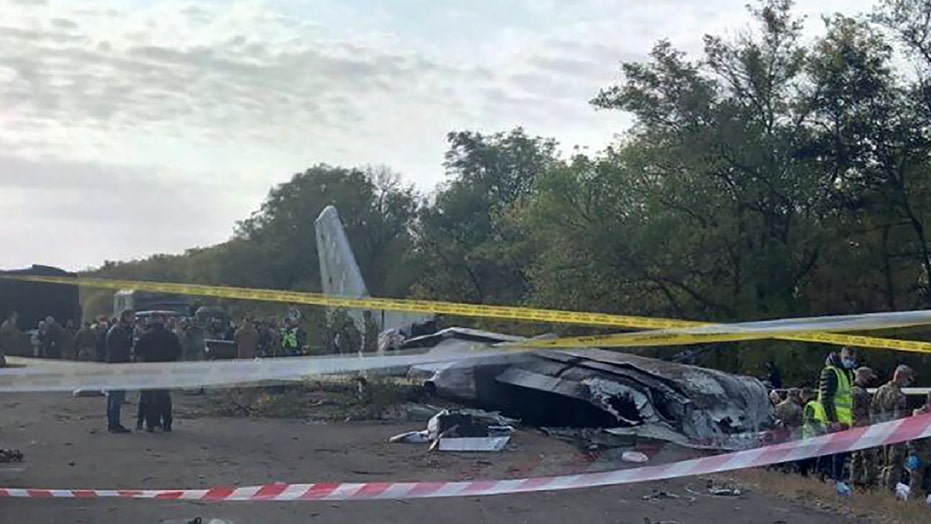 The plane, a twin-turboprop Antonov-26 belonging to the Ukrainian air force, was carrying a crew of seven and 20 cadets of a military aviation school when it crashed and burst into flames Friday night while coming in for landing at the airport in Chuhuiv, about 400 kilometers (250 miles) east of the capital Kyiv.

Two people initially survived the crash, but one later died in a hospital. No cause for the crash has been determined.

Ukrainian President Volodymyr Zelenskiy declared Saturday to be a day of mourning for the crash victims and ordered that flights of An-26 planes be halted pending investigation into the cause of the crash.

Zelenskiy, who visited the crash area Saturday, called for a full assessment of the condition of the country’s military equipment. Prime Minister Denis Shygal called for an official report on the crash by Oct. 25.

“Yesterday we lost young cadets and experienced military men, who had their whole lives and, I am sure, more than one military feat ahead of them," Zelenskiy said in a statement released by his office. “The whole country will mourn today with their families.”

Deputy Defense Minister Igor Starobinksy said the families of the dead would each be paid compensation of about 1,500,000 hryvna ($56,000).

The An-26 is a transport plane used by both military and civilian operators. Nearly 1,400 of the planes were manufactured from 1969 to 1986, according to the company's website. Defense Minister Andrei Taran said the plane that crashed was built in 1977.

An An-26 chartered by a contractor for the World Food Program crashed on Aug. 22 while taking off from Juba in South Sudan, killing seven people.

The crash was the second large air disaster to afflict Ukraine this year. In January, a Boeing 737 belonging to Ukraine International Airlines was shot down shortly after takeoff from the airport in Tehran, Iran, killing all 176 people aboard.

The plane was shot down by Iran's Revolutionary Guards amid high tensions after the United States killed a top general in a drone strike.

This story has been corrected to show that it was the prime minister, not the president, who called for the official report.