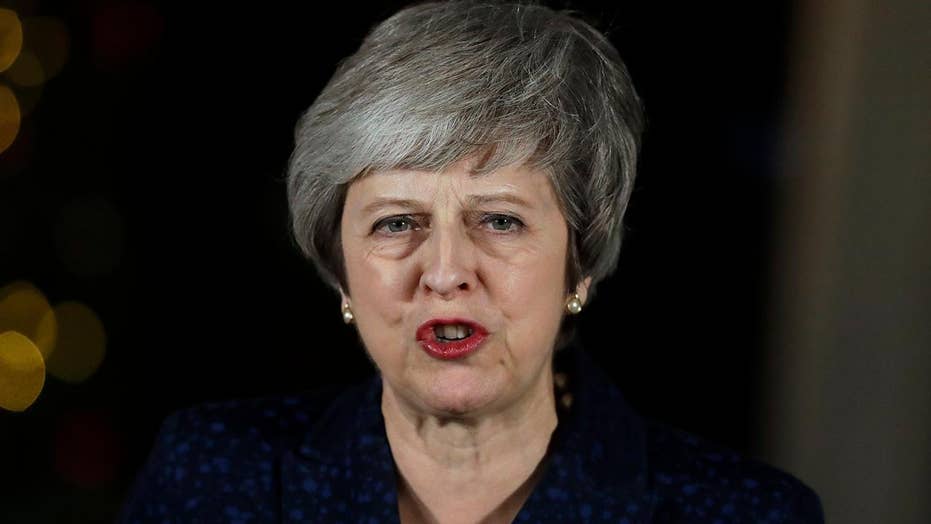 Former Senate Foreign Relations Committee staff director Lester Munson on what could happen next with the Brexit deal.

UK Labour Party leader Jeremy Corbyn appeared to call Prime Minister Theresa May a “stupid woman” on Wednesday during a heated back-and-forth at Prime Minister’s Questions -- sparking chaos in Parliament as furious Tories demanded an apology from Corbyn and action from the Speaker.

May is under fire for her handling of Britain’s departure from the European Union, and last week survived a push for her ouster from her own party. On Tuesday, she defended her approach to Brexit, calling on Parliament to back her plan as the days tick down to the March deadline.

But Corbyn, who is eyeing to replace May in 10 Downing Street in a future general election, appeared to lob a sexist insult toward the besieged prime minister in the House of Commons. The moment came as May responded to a question by launching into an attack on Corbyn’s leadership, typical of the rowdiness seen at “PMQs.”

“I’ve got some advice for the Right Honorable Gentleman, look behind you,” she said, referring to the Labour backbenches. “They’re not impressed and neither’s the country.”

As the camera switched to a scowling Corbyn, he appeared to mouth “stupid woman,” although it was not picked up by the microphones.

But eagle-eyed parliament watchers saw it, with the clip zipping around on social media. It soon found its way back into parliament, where Tory MPs furiously called points of order and demanded that Corbyn return to the chamber and apologize.

Corbyn later returned to the Commons and said that he had referred only to "stupid people."

"I did not use the words 'stupid woman' about the prime minister or anyone else and am completely opposed to the use of sexist or misogynist language in any form at all," he said.

That came after Sir Patrick McLoughlin had called a point of order and told Speaker John Bercow about the remarks, to cries of “shame” and “disgraceful” from his fellow Tories.

“Would it not be appropriate for [Corbyn] to come back into the chamber and apologize?” he asked.

Other Tories demanded Bercow to recall Corbyn to Parliament to address the House. Bercow said he could not take action immediately as he had not yet seen the evidence, but said that an apology would be appropriate if such a remark was made.

“Members are responsible for their own conduct and should apologize if they’ve committed a misdemeanor,” he said as he struggled to keep control of the chamber amid Tory anger over the remarks and Bercow's handling of it -- telling one MP: “don’t argue the toss with me.”

Bercow briefly became the focus of the debate, when Tory MP Andrea Leadsom noted that Bercow had been accused of calling her "a stupid woman" but had not apologized.

"I would like to ask...why it is that when an opposition member found that you had called me a stupid woman, you did not apologize in this chamber?" she asked.

"No no, no, no no, no, no," a flustered Bercow responded. “I dealt with that matter months ago in remarks that I made to the House of Commons, to which the right honorable lady, in our various meetings, has made no reference and which requires from the chair today no elaboration whatsoever.”

But Labour MPs attempted to change the narrative even before Corbyn responded, with Dame Margaret Beckett accusing the Tories of running an “orchestrated riot.” Labour MP Stella Creasy called on MPs to review the evidence, and asked Bercow “how do we move on to the next bit of business?”

Bercow said the way to move forward was to move on with the planned statements instead of points of order. But that remark was followed by a continued stream of points of order angry at Corbyn's alleged remarks.

Conservatives did not accept Corbyn's clarification with Leadsom saying: "The country and this House will have drawn their own conclusions."