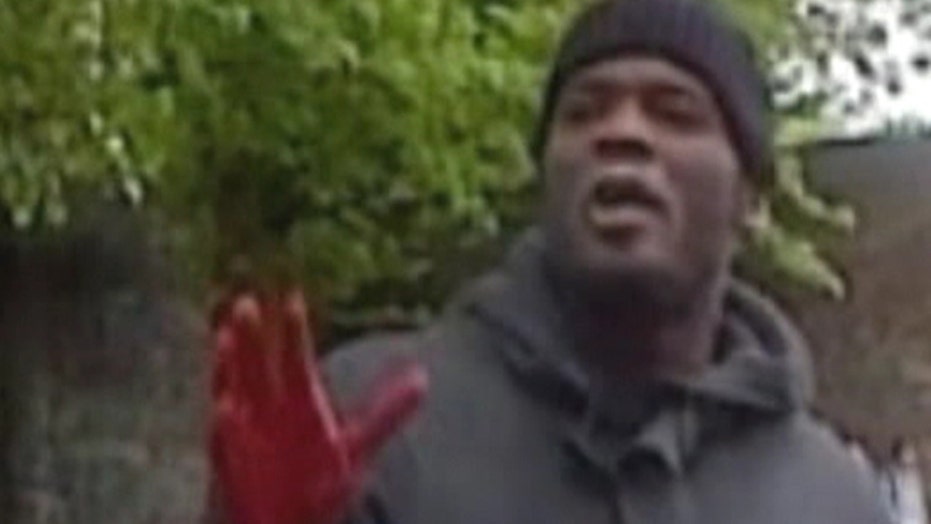 British police have made two further arrests and searched multiple properties as they widened their investigation into Wednesday's fatal hacking to death of a British soldier in broad daylight on a busy London street by two Muslim terrorists.

The two arrests, of a man and a woman -- both 29 -- on suspicion of conspiracy to murder, raises the possibility that the gruesome attack was not a so-called "lone wolf" killing as once thought.  Earlier it had been reported that the attackers were known to UK authorities and one had ties to a radical jihadist group well before the shocking attack that has stunned the United Kingdom and risked inflaming tensions between communities.

The two men, who were captured on cellphone video covered in blood and spouting jihadist rhetoric moments after the attack, have not yet been named, although Scotland Yard confirmed that they remained hospitalized in stable condition after being shot by armed police at the scene. But the killers, who wielded a machete and a cleaver and were dubbed "sickening individuals" by an incensed Prime Minister David Cameron, were already on the radar of security services, according to the BBC.

And Anjem Choudary, the leader of radical Islamist organization al-Muhajiroun -- a group banned under anti-terrorism laws in the UK -- has told Reuters that he knows one of the reported suspects. Michael Adebolajo, a Muslim convert from Christianity named by the BBC as one of the attackers, attended a number of the organization's demonstrations, lectures and activities according to Choudary, although he claimed not to have seen him for about two years.

The Ministry of Defense has named the slain soldier as 25-year-old Drummer Lee Rigby, of 2nd Battalion The Royal Regiment of Fusiliers.

In a statement made outside his Downing Street office after having chaired a meeting of the British government's COBRA (Cabinet Office Briefing Room A) emergency committee, British Prime Minister David Cameron refused to comment about whether security forces had prior knowledge of the suspects. However, he firmly condemned the attack in Churchillian terms, stating: “We will never give in to terror, or terrorism, in any of its forms.”

Additionally, the Conservative Prime Minister emphasized that “there is nothing in Islam that justifies this truly dreadful act,” and that the fault lay solely with the attackers. He also noted that more Muslim lives have been lost in terrorist acts than any other religion.

President Obama, in a statement Thursday afternoon, condemned the attack in strong terms, and reaffirmed the relationship between the US and the UK, stating: "The United States stands resolute with the United Kingdom, our ally and friend, against violent extremism and terror."

Prime Minister Cameron also praised the bravery of Ingrid Loyau-Kennett, a cub scout leader and mother of two, who got off a bus and tried to reason with the attackers after she tried to help the victim lying on the street.

The 48-year-old tried to keep talking to the two attackers before police arrived at the scene near the Royal Artillery Barracks in the neighborhood of Woolwich.

In an interview with The Daily Telegraph, Loyau-Kennett said that when one of the attackers told her that they wanted to start a war in London, she responded: "It is only you versus many people. You are going to lose."

Saying she wanted to stop one of the suspects from attacking anyone else, she asked him if he "did it" and what he wanted.

Loyau-Kennett said she saw a crashed car and the victim lying on the street and tried to help him since she had been trained in first aid. She had determined the man was dead by the time the attackers confronted her.

She said "a black guy with a black hat and a revolver in one hand and a cleaver in the other came over" and excitedly warned her to stay away from the body.

"I asked him why he had done what he had done," The Guardian quoted her as saying. "He said he had killed the man because he [the victim] was a British soldier who killed Muslim women and children in Iraq and Afghanistan. He was furious about the British Army being over there."

She told The Daily Telegraph that the suspected terrorist was "in full control of his decisions" and did not appear to be under the influence of drugs or alcohol.

When the man told him he was going to kill police when they arrived, she asked him if that was reasonable and tried to keep him engaged.

Then she spoke to the other attacker, who she described as quiet and shy.

"I asked him if he wanted to give me what he was holding in his hand, which was a knife, but I didn't want to say that," she said. "He didn't agree and I asked him: `Do you want to carry on?' He said: `No, no, no.' I didn't want to upset him," she is quoted as saying in The Guardian.

Loyau-Kennett said she was not scared and that the armed men did not seem to be drunk or on drugs. She said she was trying to keep them occupied so they didn't get more agitated.

She re-boarded her bus shortly before police arrived, watching from the vehicle as police shot and wounded the two unidentified suspects, who are both receiving treatment in the hospital.

"The officers shot them in the legs, I think" she told The Guardian.

The British government's COBRA emergency committee met Thursday after Prime Minister David Cameron said there were "strong indications" it was an act of terrorism, and two other officials said there were signs the attack was motivated by radical Islam.

One of the attackers went on video to explain the crime -- shouting political statements, gesturing with bloodied hands and waving a meat cleaver.

Images from the scene showed a blue car that appeared to have been used in the attack, its hood crushed and rammed into a signpost on a sidewalk that was smeared with blood. A number of weapons -- including butchers' knives, a machete and a meat cleaver -- were strewn on the street.

Footage -- obtained by ITV news and The Sun newspaper -- showed a man in a dark jacket and knit cap walking toward a camera, clutching a meat cleaver and a knife. Speaking in English with a British accent, he apologized that female passers-by "have had to witness this" barbarity, saying that "in our land our women have to see the same."

He gave no indication what that land was as he urged people to tell the government to "bring our troops back." British troops are deployed in Afghanistan and recently supported the French-led intervention in Mali.

"We swear by almighty Allah we will never stop fighting you," the man declared. "We must fight them as they fight us." The camera then panned away to show a body lying on the ground.

Scotland Yard confirmed that counterterrorism officers were leading an investigation into the attack. Commissioner Sir Bernard Hogan-Howe said the two men had been arrested and urged Londoners to remain calm. Both men were hospitalized, one in serious condition.

Late Wednesday, riot police fanned out in Woolwich as about 50 men waving the flag of the far-right English Defense League gathered, singing nationalistic songs and shouting obscenities about the Quran.

Meanwhile, Muslim groups quickly condemned the attack, calling for the police to calm tensions. The Muslim Council of Britain called it a "barbaric act that has no basis in Islam," adding that "no cause justifies this murder."

Britain has been at the heart of several terror attacks or plots in recent years, the most deadly being the 2005 rush-hour suicide bombings when 52 commuters were killed. More recently, Parviz Khan was convicted in 2008 of plotting to kidnap and behead a British Muslim soldier in Birmingham.

Some extremists have lashed out at Britain's involvement in Afghanistan and Iraq. Recently, groups have also criticized Britain's assistance in the French-led mission to Mali to root out Islamic extremists in the north.