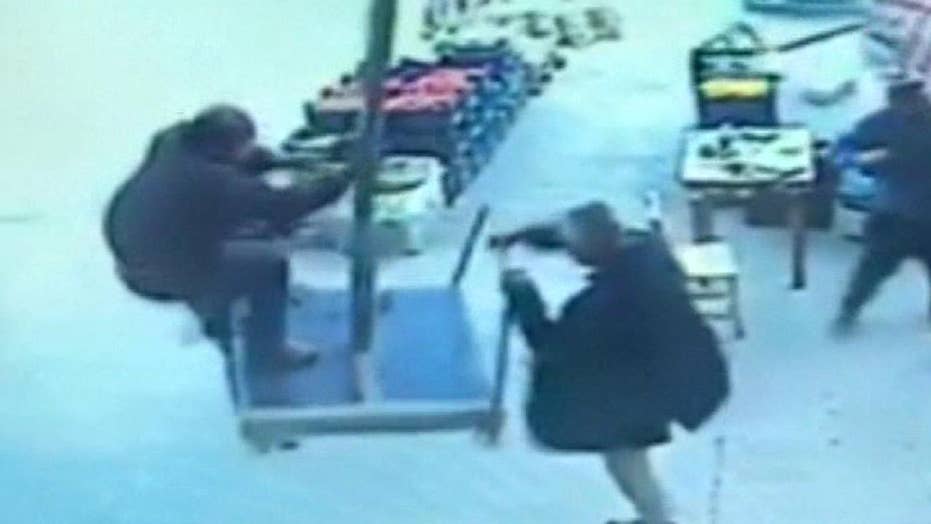 Raw video: Strong winds in Turkey blow away standing umbrella and the man underneath it

A man in southern Turkey was taken on a wild ride after strong winds lifted him — and the umbrella he was holding onto — almost 13 feet in the air.

Security footage released Wednesday shows Sadik Kocadalli and two other men in a market in the province of Osmaniye rushing to prevent a patio umbrella on wheels from blowing away as heavy gusts of wind hit.

Kocadalli, a vegetable market worker, told Turkish news agency DHA that he had been working when he noticed the umbrella swaying.

“When the wind got stronger I noticed the umbrella moving so I tried to save it from flying away by stepping on it. And when I stepped on it, it lifted,” he told DHA.

He can be seen in the video stepping onto the platform of the umbrella, using his full body weight to keep it down — to no avail. Instead, the wind picked up the umbrella with Kocadalli still on it.

He said he flew almost 13 feet before he jumped down. Thankfully, Kocadalli wasn’t injured.

“It went up three, four meters [between 9-13 feet] and I thought, 'this won't work' so I jumped down,” Kocadalli said. “Thankfully, I am okay. The umbrella hit a pole and fell back down.”

However, the umbrella landed on another man who was knocked unconscious, according to The Independent. The landing umbrella broke Mehmet Ali Bicakci's foot and ribs, the news outlet reported.

The DHA reported the strong winds were a result of a 10-minute tornado that hit the area.