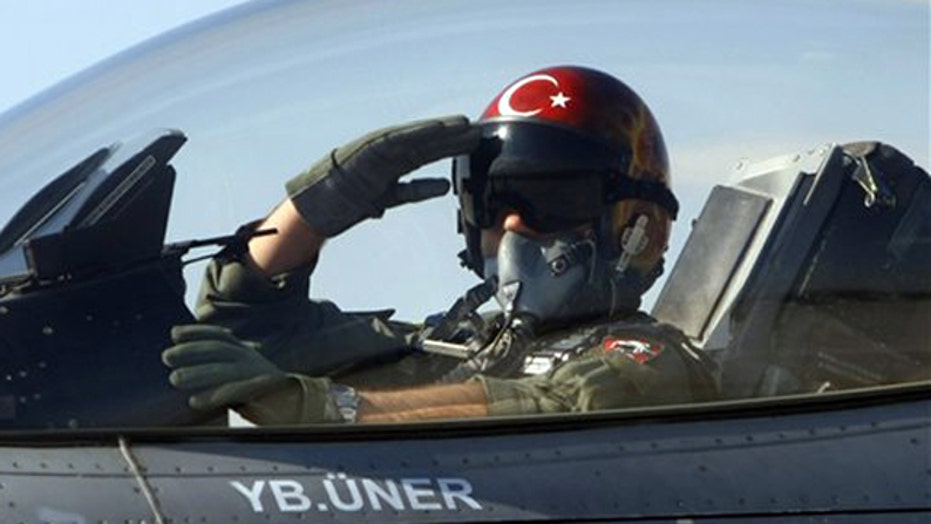 Tensions rise in Turkey and Syria after jet is shot down

ANKARA, Turkey – Turkey will take retaliatory steps against Syria for the downing of one of its military jets, President Abdullah Gul said Saturday, even as he suggested that the aircraft may have violated Syrian airspace.

It was not clear if Gul was suggesting military retaliation, increased sanctions against Syria or other possible steps, including demands for an apology, and his aide would not comment on his words. But Faruk Celik, Turkey's Labor and Social Security Minister, said Turkey would retaliate "either in the diplomatic field or give other types of response."

"Even if we assume that there was a violation of Syria's airspace -- though the situation is still not clear -- the Syrian response cannot be to bring down the plane," Celik told reporters.

"The incident is unacceptable," he said. "Turkey cannot endure it in silence."

Syria said Friday its forces had shot down a Turkish military plane that entered its air space. The plane, an unarmed F-4, went down in the Mediterranean Sea about 8 miles (13 kilometers) from the Syrian town of Latakia, Turkey said.

The incident further escalated tensions between Syria and NATO-member Turkey. The two neighbors used to be allies before the Syrian revolt began in March 2011, but Turkey has become one of the strongest critics of the Syrian regime's brutal response to the country's uprising and is playing host to civilian and military Syrian opposition groups.

In Baghdad, Iraqi Foreign Minister Hoshyar Zebari said the recent defection of a Syrian pilot to Jordan and the downing of the Turkish jet showed that the Syrian conflict could have far-reaching repercussions.

"Our main concern is the spillover of the crisis into neighborhood countries. No country is immune from this spillover," he said. "If this conflict were to turn into all-out sectarian or civil war, Iraq would be affected, Lebanon would be affected, Jordan would not be immune, Turkey could be (affected)."

"Everything must be done to ensure that there won't be any further escalation in the already tense region,' he said in a statement.

Turkish Foreign Minister Ahmet Davuoglu chaired a meeting Saturday with military officials during which they discussed possible steps and a search and rescue mission for the two missing pilots, the Foreign Ministry said. There was no announcement after the meeting.

Deputy Prime Minister Bulent Arinc insisted the plane was not a fighter jet but a reconnaissance plane and said Turkey was awaiting an explanation from Syria.

The president said Turkey was still trying to establish the exact circumstances of the incident, but said it was "routine" for jets flying in high-speeds to unintentionally violate other countries' air spaces for short periods of time.

"These incidents are routine," Gul said. "They are incidents that are not ill-intentioned and happen because of the speeds (of the jets)."

"Was that the case, or did (the incident) occur in our own air space, these facts will emerge," he said. "No one should have any doubt that whatever (action) is necessary will be taken."

Gul did not elaborate. But Turkey said after an April border shooting incident -- in which two people inside a Turkish refugee camp died-- that it would call on its NATO allies to intervene should it feel its security was being threatened.

Syrian coast guards joined Turkish coast guards in their search for the jet's two missing crew members for a second day Saturday, Arinc, the deputy prime minister said. Gul said earlier that some pieces of the wreckage had been found.

"The Syrian anti-air defenses counteracted with anti-aircraft artillery, hitting it directly," SANA said. "The target turned out to be a Turkish military plane that entered Syrian airspace and was dealt with according to laws observed in such cases."

Syria claimed the jet violated its air space over territorial waters, penetrating about 1 kilometer. It said Syrian forces only realized that it was a Turkish jet after firing.

On Saturday, the banner headline of Turkish newspaper Hurriyet accused Syria of "Playing with Fire," while Vatan newspaper said Syria would "pay the price" for the attack.

Arinc and other government ministers however, urged restraint.

"We must remain calm and collected," he said. "We must not give premium to any provocative speeches and acts."

The leader of Turkey's main opposition party, Kemal Kilicdaroglu, said the downing of the plane was unacceptable but also urged calm.

"All diplomatic channels must be kept open. We are expecting a coolheaded assessment of the incident," he added.