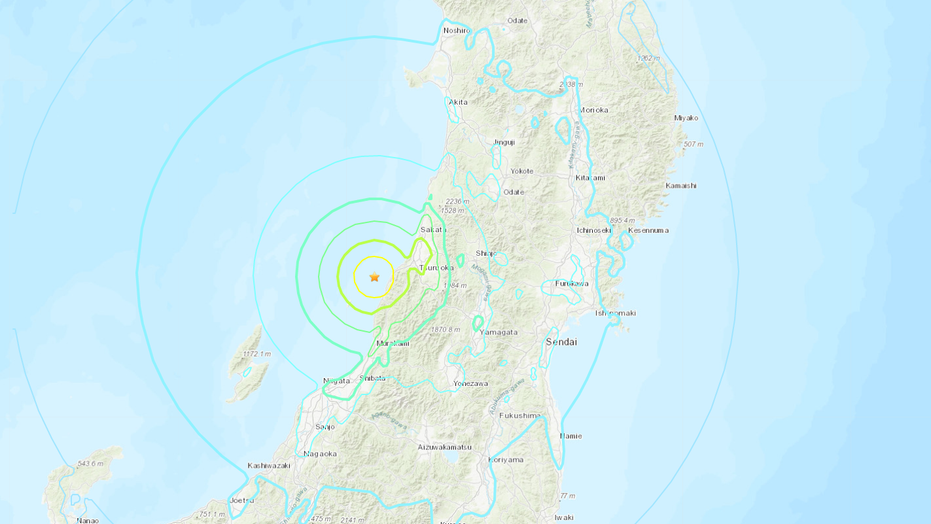 A tsunami warning was in effect Tuesday night in Japan after a 6.8-magnitude earthquake shook a northwestern part of the country.

The earthquake registered off the western coast of Yamagata, roughly 30 miles southwest of the city of Sakata, according to Japan's Meteorological Agency. The shallow quake hit around 6 miles below the sea's surface.

A tsunami warning was in effect in Japan late Tuesday after officials said an earthquake hit the country's northwestern region. (U.S. Geological Survey)

The agency predicted that a tsunami of up to three feet could happen along the coast of the northwestern prefectures of Yamagata, Niigata and Ishikawa. Officials don't expect major damage as a result, The Japan Times reported.

All seven reactors at the Kashiwazaki-Kariwa nuclear plant in Niigata were offline and no abnormalities were reported.

Japan is one of the most earthquake- and tsunami-prone areas in the world. On March 11, 2011, a magnitude 9.0 offshore quake hit the northeast coast, causing a tsunami that took more than 18,000 lives and triggered a nuclear disaster at the Fukushima power plant.

On Monday, at least 12 people were killed and 135 others were injured when a 6.0-magnitude earthquake and 5.1-magnitude aftershock hit China's southwestern Sichuan province, officials said.