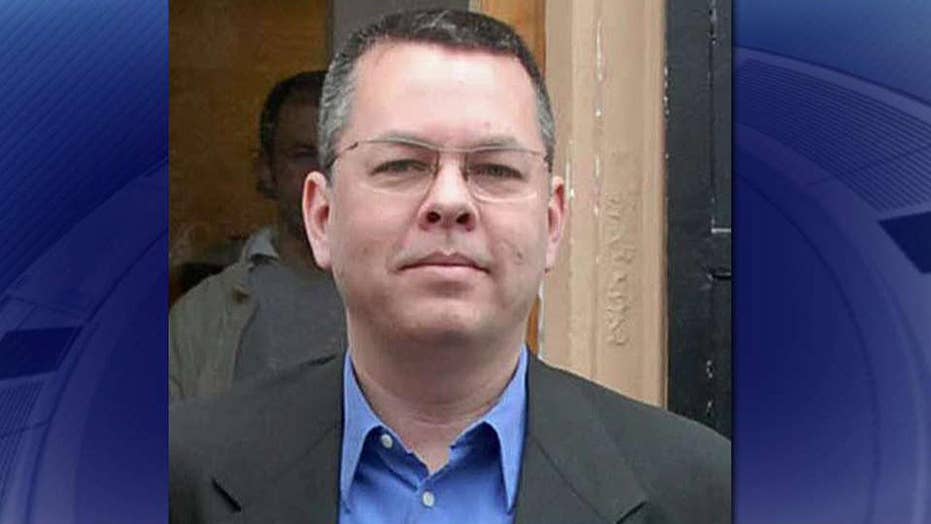 President Trump sharply rebuked Turkey for the ongoing trial of detained American pastor Andrew Brunson late Thursday, tweeting that he is "being persecuted in Turkey for no reason."

Brunson, who is accused of espionage and aiding terror groups, should be "allowed to come home to his beautiful family where he belongs," Trump said.

The tweet was not the first time Trump has voiced support for the imprisoned pastor. Last May, in a face-to-face meeting with Turkish President Tayyip Erdogan in Washington, Trump called for Brunson's release, the White House said at the time.

But Trump's pointed condemnation Thursday highlighted the increased stakes now that formal proceedings against Brunson have begun. The pastor faces up to 35 years in prison if convicted of the espionage-related crimes.

And the dustup comes amid tensions between the U.S. and Turkey over the conflict in Syria, where Turkish officials have claimed the U.S. is intentionally stalling the fight against Islamic State militants.

That failed coup led to a sweeping government crackdown against suspected dissidents, and Brunson was initially held in October 2016 on immigration-related offenses.

Turkey also claims Brunson passed along state secrets and intelligence that might be useful in the event of a war, such as the location of railway stations.

The American Center for Law and Justice (ACLJ), which is helping to represent Brunson, said he was held for nearly a year and a half without being formally charged.

"They call him a Spy, but I am more a Spy than he is," Trump wrote, after calling Brunson a "fine gentleman and Christian leader in the United States."

In a hearing Monday, Brunson, appearing gaunt, categorically denied the allegations against him.

US and Turkey at an impasse over Syria

"I am a Christian pastor,” Brunson said during the hearing. “I did not join an Islamic movement. Their aims and mine are different."

The U.S. has a team in Turkey observing the trial, including former Kansas Sen. Sam Brownback, the U.S. Ambassador at Large for Religious Freedom.

The ACLJ has called the prosecution outrageous.

“He has done nothing," the ACLJ senior counsel CeCei Heil said. "He is an innocent pastor who has simply lived out his faith in Turkey."