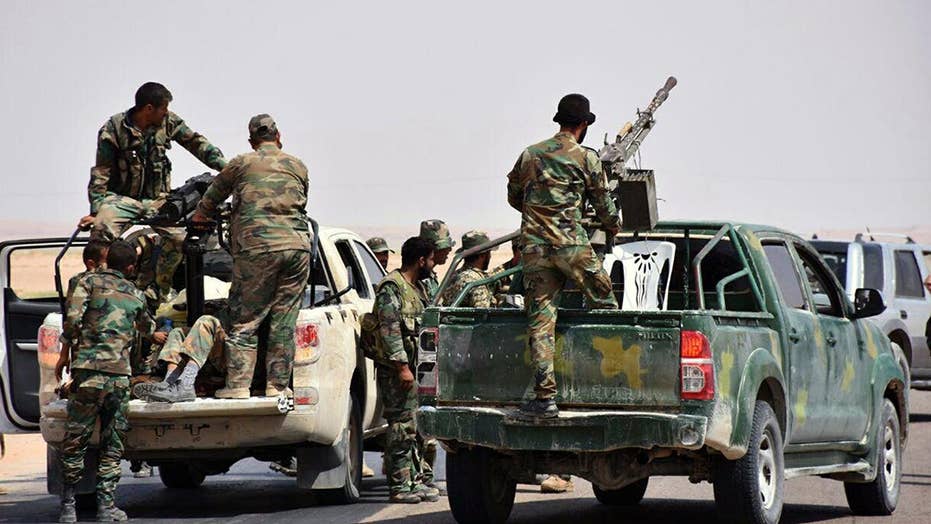 Why ISIS is dwindling in Iraq and Syria

The U.S. military estimates the terror group now controls just 3 percent of Iraq and only 5 percent of Syria after the fall of Raqqa.

BAGHDAD – Hundreds of ISIS fighters had just been chased out of a northern Syrian city and were fleeing through the desert in long convoys, presenting an easy target to U.S. A-10 "warthogs."

But the orders to bomb the black-clad jihadists never came, and the terrorists melted into their caliphate -- living to fight another day. The events came in August 2016, even as then-Republican presidential nominee Donald Trump was vowing on the campaign trail to let generals in his administration crush the organization that, under President Obama, had grown from the “jayvee team” to the world’s most feared terrorist organization.

“I will…quickly and decisively bomb the hell out of ISIS,” Trump, who would name legendary Marine Corps Gen. James Mattis as secretary of defense, promised. “We will not have to listen to the politicians who are losing the war on terrorism."

Just over a year later, ISIS has been routed from Iraq and Syria with an ease and speed that's surprised even the men and women who carried out the mission. Experts say it's a prime example of a campaign promise kept. President Trump scrapped his predecessor’s rules of engagement, which critics say hamstrung the military, and let battlefield decisions be made by the generals in the theater, and not bureaucrats in Washington.

"I felt quite liberated because we had a clear mandate and there was no questioning that.”

At its peak, ISIS held land in Iraq and Syria that equaled the size of West Virginia, ruled over as many as 8 million people, controlled oilfields and refineries, agriculture, smuggling routes and vast arsenals. It ran a brutal, oppressive government, even printing its own currency.

Lt. Col. Seth Folsom credits the cooperation between Iraqi Security Forces and the U.S-led coalition for the military defeat of ISIS in Iraq. (Courtesy U.S Army)

The terror organization now controls just 3 percent of Iraq and less than 5 percent of Syria. Its self-styled "caliph," Abu Bakr al-Baghdadi, is believed to be injured and holed up somewhere along the lawless border of Syria and Iraq.

ISIS remains a danger, as members who once ruled cities and villages like a quasi-government now live secretly among civilian populations in the region, in Europe and possibly in the U.S. These cells will likely present a terrorist threat for years. In addition, the terrorist organization is attempting to regroup in places such as the Philippines, Libya and the Sinai Peninsula.

But the military’s job -- to take back the land ISIS claimed as its caliphate and liberate cities like Mosul, in Iraq, and Raqqa, in Syria, as well as countless smaller cities and villages, is largely done. And it has taken less than a year.

Mattis, a US Marine Corps general, said there would be no White House micromanaging on his watch (Associated Press)

“The leadership team that is in place right now has certainly enabled us to succeed,” Brig. Gen. Andrew Croft, the ranking U.S. Air Force officer in Iraq, told Fox News. “I couldn’t ask for a better leadership team to work for, to enable the military to do what it does best.”

President Trump gave a free hand to Mattis, who in May stressed military commanders were no longer being slowed by Washington “decision cycles,” or by the White House micromanaging that existed President Obama. As a result of the new approach, the fall of ISIS in Iraq came even more swiftly than hardened U.S. military leaders expected.

“It moved more quickly than at least I had anticipated,” Croft said. “We and the Iraqi Security Forces were able to hunt down and target ISIS leadership, target their command and control.”

After the battle to liberate Mosul – ISIS’ Iraqi headquarters - was completed in July -- the U.S.-led coalition retook Tel Afar in August, Hawija in early October and Rawa in Anbar province in November.

Marine Col. Seth Folsom, who oversaw fighting in Al Qaim near the Syrian border, agreed. He wasn’t expecting his part of the campaign against ISIS to get going until next spring and figured even then, it would then "take six months or more."

Instead, ISIS was routed in Al Qaim in just a few days.

Mosul, and several other cities liberated by ISIS, were largely destroyed in the fighting. (Fox News/Hollie McKay)

“We really had one mandate and that was enable the Iraqi Security Forces to defeat ISIS militarily here in Anbar. I feel that we have achieved that mission,” Folsom said. “I never felt constrained. In a lot of ways, I felt quite liberated because we had a clear mandate and there was no questioning that.”

Brig. Gen. Robert “G-Man” Sofge, the top U.S. Marine in Iraq, told Fox News his commanders have “enjoyed not having to deal with too many distractions and there was no question about what the mission here in Iraq was.”

Iraqi Brig. Gen. Yahya Rasool was skeptical of Trump at first, but says success on the ground has been swift (Fox News/Hollie McKay)

“We were able to focus on what our job was without distraction and I think that goes a long way in what we are trying to accomplish here,” he said.

Sofge said while some had implied that there had been a "loosening of the rules," he insisted that such a suggestion is “absolutely not true.”

“We used precision strikes, and completely in accordance with international standards,” he said. “We didn’t lower that standard, not one little bit. But we were able to exercise that precision capability without distraction and I think the results speak for themselves.”

The U.S.-led coalition said this week the Coalition Civilian Casualty Assessment Team has added 30 new staffers to travel throughout the region. It said military leaders continue to “hold themselves accountable for actions that may have caused unintentional injury or death to civilians.”

The coalition also said dozens of reports of civilian casualties have been determined to be “non-credible,” and just .35 percent of the almost 57,000 separate engagement carried out between August 2014 and October 2017 resulted in a credible report of a civilian casualty.

In addition to air support, the U.S.-led strategy also includes training and equipping Iraqi troops on the ground.

While the Trump administration’s success is often underplayed in the U.S. media, it is obvious on the ground in Iraq, according to a spokesman for Iraq’s Ministry of Defense, Yahya Rasool.

“I was not optimistic when Trump first came to the office,” Rasool said. “But after a while I started to see a new approach, the way the U.S. was dealing with arming and training. I saw how the coalition forces were all moving faster to help the Iraq side more than before. There seemed to be a lot of support, under Obama we did not get this.”

Al-Baghdadi, who once ruled a caliphate the size of California, is now inn hiding and likely badly injured

Despite the victories on the battlefield, U.S. officials cautioned much work remains to be done.

“ISIS is very adaptive,” noted Col. Ryan Dillon, the U.S.-led coalition spokesman. “We are already seeing smaller cells and pockets that take more of an insurgent guerrilla type approach as opposed to an Islamic army or conventional type force. So we have got to be prepared for that.”

He said as a result the coalition is “adjusting some training efforts” so the Iraqi forces -- upwards of 150,000 have already undergone training -- are equipped to address such threats and ensure long-term stability.

Folsom said “the worst thing we could do” is not finish the job.

“If a country becomes a failed state, if it becomes a lawless region, you begin to set the conditions for what happened in the years before 9/11,” he said. “In those ungoverned spaces where we don’t know what is going on, that is where those seeds of extremism begin to blossom.”