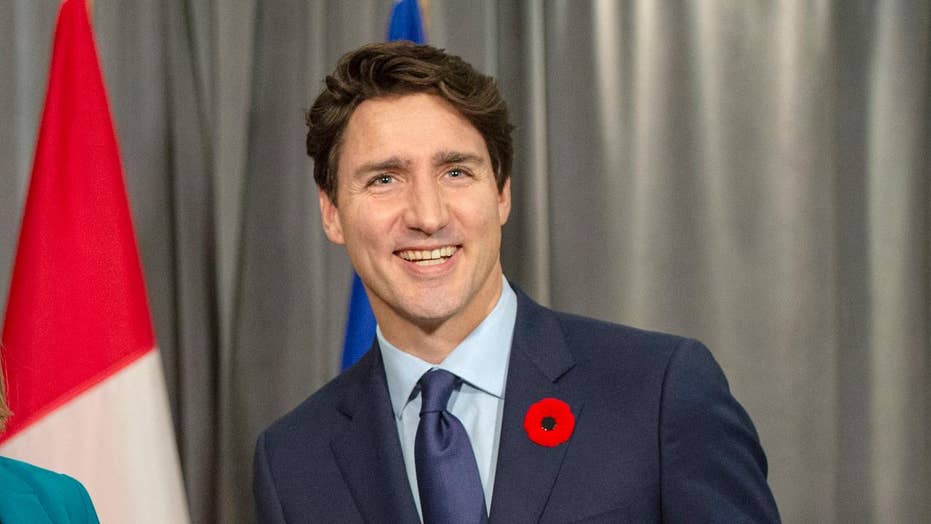 Canada is the first Western country to claim its agents have heard recordings of what happened to Jamal Khashoggi; Kristin Fisher reports from Washington.

Canadian Prime Minister Justin Trudeau on Monday became the first Western leader to acknowledge his country had heard recordings of the killing of Saudi writer and activist Jamal Khashoggi.

"Canada has been fully briefed up on what Turkey had to share," Trudeau said from Paris, where he was attending the Peace Forum following the World War I armistice centenary.

His comments come just two days after Turkish President Recep Tayyip Erdogan said he had given recordings "to Saudi Arabia, to America, to the Germans, the French, to the British, to all of them."

The Canadian leader is the first since that announcement to officially confirm that his country's intelligence had listened to the audio as Canada's intelligence agencies continue to work "very closely" with Turkish intelligence on Khashoggi's killing.

Trudeau said that he personally had not heard the shared audio, which is the latest move by Turkey to maintain international pressure on Saudi Arabia to prevent a cover-up of the Oct. 2 killing.

He declined to give any details on the contents of the tapes.

Trudeau also said he thanked Erdogan in person for "his strength in responding to the Khashoggi situation" when the two leaders met in Paris this weekend.

The cooperation between the two countries comes at a rocky moment.

In an unrelated diplomatic spat, Canada in August criticized the arrests of Saudi women's rights activists. In response, Saudi Arabia ordered the Canadian ambassador to leave the kingdom and froze all new business between the two countries.

France's account about the Kashoggi audio, meantime, differed from Erdogan's claim about sharing the audio.

When questioned on France 2 Television Monday, French Foreign Minister Jean-Yves Le Drian said that Turkey has "not to my knowledge" given the French government any such recordings, and suggested the Turks were playing games.

"If the Turkish president has information to give to us, he must give it to us... That means he is playing a political game in this situation," Le Drian said.

Going further, Cavusoglu suggested that Le Drian may be trying to cover-up the killing so as not to endanger agreements with Saudi Arabia.

"No one should be surprised if soon they begin to deny the murder that even Saudi Arabia accepted," Cavusoglu said. "Who has recently reached which agreement — this should be carefully looked into."

He said: "Are they trying to cover up this murder? There are things we know ... What kind of an agreement are they in? We are following these."

CIA Director Gina Haspel, who visited Turkey last month for information on the investigation, is reported to have heard the recordings, the existence of which was leaked to the media but never openly confirmed until Saturday.

Hunt — the first British minister to visit Saudi Arabia since Khashoggi was killed — said he would press the kingdom to fully cooperate with a Turkish investigation into the writer's killing.

"The international community remain united in horror and outrage at the brutal murder of Jamal Khashoggi one month ago. It is clearly unacceptable that the full circumstances behind his murder still remain unclear," Hunt said in a statement ahead of landing in Riyadh.

A statement by the state-run Saudi News Agency did not make any references to Khashoggi, saying only that King Salman and Hunt discussed bilateral relations and the latest developments in the region.

On Sunday U.S. Secretary of State Mike Pompeo spoke with the Saudi crown prince on the telephone and "emphasized that the United States will hold all of those involved in the killing of Jamal Khashoggi accountable, and that Saudi Arabia must do the same."

The crown prince is widely suspected of at least having knowledge of the killing, which involved some members of his security entourage. Khashoggi was a Washington Post columnist and a critic of the crown prince who was living in self-imposed exile before his death, as Fox News previously reported.

Under mounting pressure, Saudi Arabia has changed its narrative about Khashoggi's killing, first saying that he walked out of the embassy the day he disappeared before eventually acknowledging Khashoggi died inside the consulate. Saudi Arabia has also recently acknowledged Turkish evidence that showed the slaying was premeditated.

Turkey says a 15-member Saudi assassination squad strangled and dismembered Khashoggi at the consulate. Media reports have suggested that his body could have been chemically dissolved as it has not yet been found.

Saudi officials characterized the killing as a rogue operation carried out by Saudi agents who exceeded their authority.