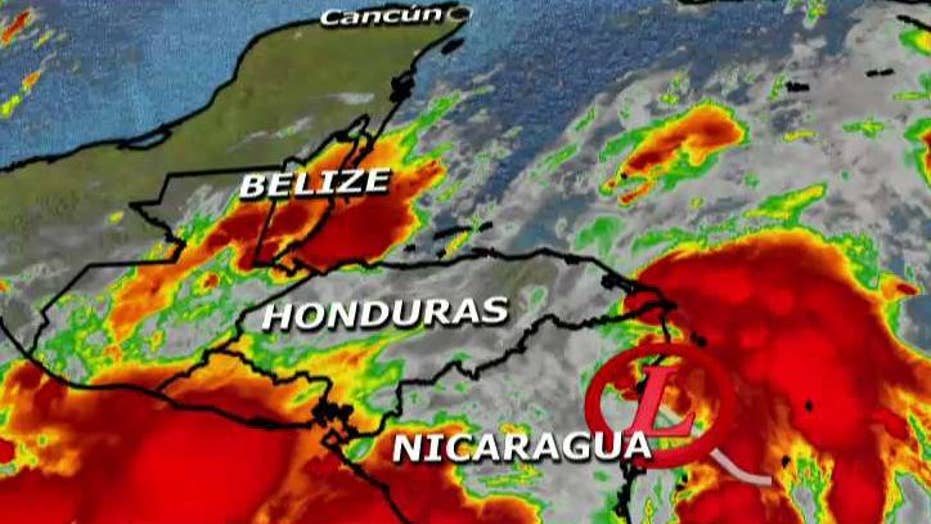 Possible hurricane developing in the Gulf of Mexico

After a brief pause in tropical activity, Tropical Storm Nate formed Thursday in the Caribbean near the coast of Nicaragua and may impact the Gulf Coast by this weekend.

The storm is located about 45 miles west of Puerto Lempira, Honduras, the National Hurricane Center said in its 8 p.m. ET advisory.

Nate has sustained winds of about 40 mph, moving north-northwest at 10 mph, the NHC said, adding that "strengthening is likely once the center moves over the northwestern Caribbean Sea tonight and Friday."

"On the forecast track, the center of Nate should move across eastern Honduras this evening and over the northwestern Caribbean Sea tonight and Friday," the NHC said.

"There is quite a bit of uncertainty when it comes to timing, track and intensity, but the southeastern Louisiana coast to the Florida Panhandle should monitor the forecast and any changes over the next few days."

They also said the storm could reach hurricane strength as it nears the Yucatan Peninsula.

The government of Mexico has issued a Hurricane Watch along the northern coast of the Yucatan Peninsula from Punta Herrero to Rio Lagartos.  Bands of heavy rain and wind may affect Cancún and Cozumel by Friday, according to Fox News Senior Meteorologist Janice Dean.

A Tropical Storm Warning is also in effect from Sandy Bay Sirpi, Nicaragua to Punta Castilla, Honduras as well as Punta Herrero to Rio Lagartos, Mexico.

"Interests elsewhere in Honduras, the Bay Islands, western Cuba, the Yucatan Peninsula and the northern coast of the Gulf of Mexico should monitor the progress of Nate," the NHC said.

TRACK THE STORM AT MYFOXHURRICANE.COM.

The storm is more likely to strengthen into Saturday as it moves northward, eventually into the Gulf of Mexico, according to Dean.

Any possible impact from the storm on the United States is not yet clear, but the NHC's forecast cone shows it may approach the eastern Gulf Coast near the Florida panhandle as a hurricane by Sunday.

"There is quite a bit of uncertainty when it comes to timing, track and intensity, but the southeastern Louisiana coast to the Florida Panhandle should monitor the forecast and any changes over the next few days," Dean said.

Florida Gov. Rick Scott declared a state of emergency for 29 counties ahead of Nate's possible approach, and warned residents along the state's Gulf Coast to have a plan, disaster kit, and "be ready today."

"It clearly can get much worse than it is," Scott said, reminding residents the storm will eventually pass over warm waters in the Gulf of Mexico.

In Nicaragua, Nate's arrival followed two weeks of near constant rain that had left the ground saturated and rivers swollen. Authorities placed the whole country on alert and warned of flooding and landslides, the Associated Press reported..

Nicaragua's vice president and spokeswoman, Rosario Murillo, said that two women and a man who worked for the Health Ministry were swept away by a flooded canal in the central municipality of Juigalpa while working to aid the community.

Two other men drowned -- one in the Carazo area south of Managua and the other in the Coco river near the border with Honduras as the government closed schools along the Caribbean coast.

Nate is the 14th named storm of the year, and comes after a month of devastation from Hurricanes Harvey, Irma and Maria.

Forecasters said the Atlantic hurricane season would be "above-normal," with 14 to 19 by the peak season.

An average Atlantic hurricane season, which runs from June 1 to Nov. 30, produces 12 named storms, of which six become hurricanes, including three major hurricanes, according to NOAA.