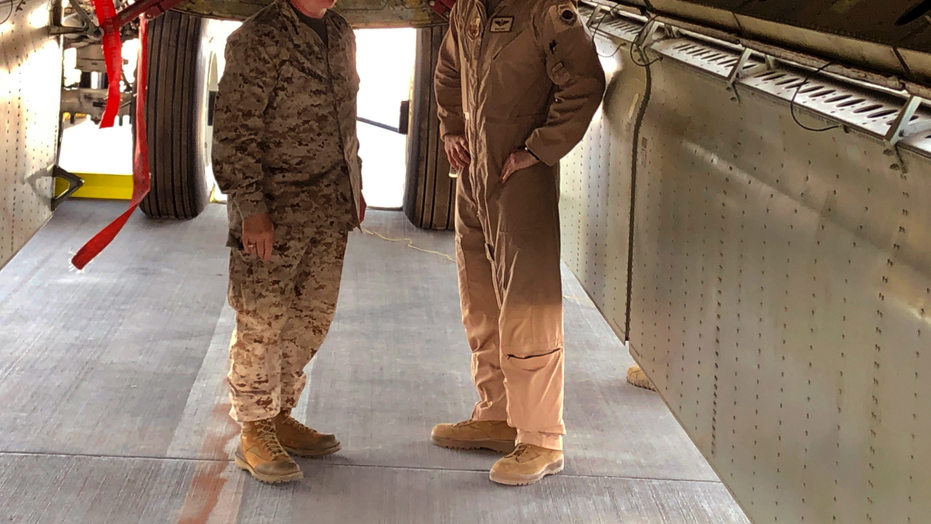 The top U.S. commander for the Middle East  paid a visit to Iraq Tuesday with little fanfare, as the U.S. tries to quell an Iraqi push for U.S. troop removal in light of the attack which took out Iranian Gen. Qassem Soleimani on their soil.

Marine Gen. Frank McKenzie was the most senior U.S. military official to visit Iraq since the drone attack in Baghdad which took out not only Iran’s most powerful general but an Iraqi general traveling with him as well. Iraqi Gen. Abu Mahdi al-Muhandis was the deputy commander of Iran-backed militias known as the Popular Mobilization Forces.

McKenzie met with leaders in Baghdad and visited American troops at al-Assad airbase, which was bombed by Iran last month in retaliation. “I think we're going to be able to find a way forward,” McKenzie told reporters upon leaving the country, saying that he was “heartened” by the meetings.

Marine Gen. Frank McKenzie, head of U.S. Central Command, confers with an Air Force officer below the bomb bay of a B-52 bomber on Friday, June 7, 2019 at al-Udeid air base in Qatar. (AP Photo/Robert Burns)

IRANIAN ACCUSED OF SPYING FOR CIA WILL BE EXECUTED 'SOON,' OFFICIAL SAYS

He acknowledged that due to current tense relations, joint military operations and training between U.S. and Iraqi troops had been scaled back. McKenzie said relations were still in a period of “turbulence” and had “a ways to go,” but U.S. special operations forces were still carrying out missions with Iraqi commandos.

The American strike and Iranian counterstrikes that left Iraq caught in the crossfire have led to violent protests across the country and a vote by Iraqi parliament to push U.S. troops to withdraw altogether. U.S. leaders have largely dismissed calls for American troops, which number more than 6,000 in Iraq, to leave the country.

McKenzie said it’s difficult to predict how Tuesday’s discussions will pan out, particularly because the government is in transition. McKenzie spoke with Prime Minister Adel Abdul-Mahdi, President Barham Saleh, and Speaker of the House Salim al-Jabouri, but he did not speak with Mohammed Allawi, who is expected to succeed the current prime minister.

After the Jan. 8 attacks on two air bases housing U.S. troops in Iraq, the U.S. asked to bring the Patriot surface-to-air system into the country. There were no Patriot or air defenses capable of shooting down ballistic missiles at the time of the attack. No one was killed in the attack, but 64 were diagnosed with brain injury.

Iraqis have not yet approved the requests, but McKenzie said it was discussed during the meetings. He said the threat from Iran and proxy forces in Iraq and Syria remains high and “it is a really dangerous time.”

However, McKenzie insisted he had a “moral obligation” to travel to Iraq at this time. “It's important to go and see the Iraqi government, to show them we're with them and that this is an important relationship,” he added.