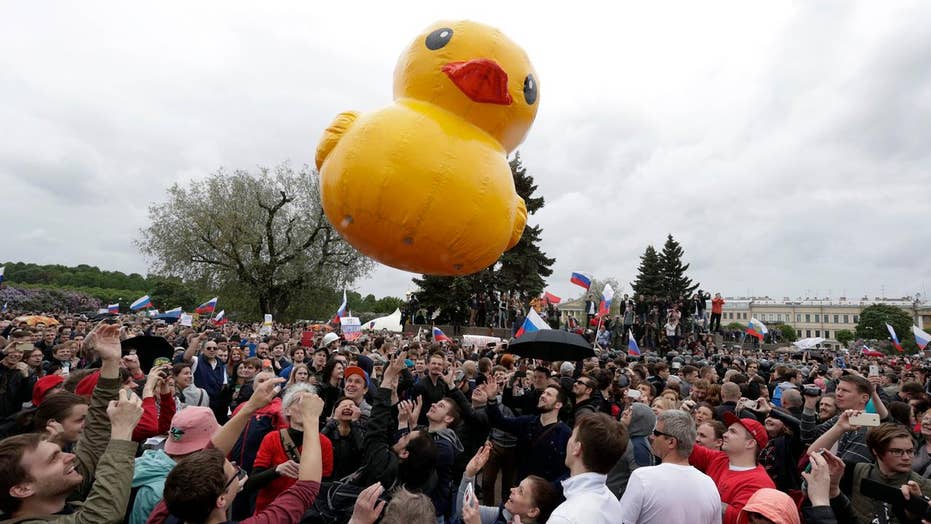 MOSCOW – Tens of thousands of protesters held anti-corruption rallies across Russia on Monday in a new show of defiance by an opposition that the Kremlin had once dismissed as ineffectual and marginalized.

More than a thousand were arrested — including opposition leader and protest organizer Alexei Navalny, who was seized outside his Moscow residence while heading to the rally in the city center and sentenced to 30 days in jail several hours later.

The Moscow protest was the most prominent in a string of more than 100 rallies in cities and towns stretching through all 11 of Russia's time zones — from the Pacific to the European enclave of Kaliningrad — with many denouncing President Vladimir Putin.

Thousands of angry demonstrators thronged to Tverskaya Street, a main avenue in the capital, chanting "Down with the czar" and singing the Russian national anthem.

The protests coincided with Russia Day, a national holiday that this year brought out historical re-enactors, some of them dressed in medieval costumes. At one point, the Moscow demonstration featured an unlikely scene of about 5,000 protesters rallying next to an enclosure with geese, a medieval catapult and bearded men in homemade tunics and carrying wooden shields.

The re-enactors watched the rally before riot police broke up the crowd and randomly seized the protesters.

Over 800 people were arrested in Moscow, while in St. Petersburg, about 500 were forced into police buses at an unsanctioned rally that drew up to 10,000 people. Navalny was taken to court Monday evening and sentenced to 30 days in jail shortly after midnight for repeated violations of the law on public gatherings.

"The scope of the rallies was amazing, and so many people came out," Navalny told reporters shortly before he was sentenced, point to protest rallies held in towns which have not seen any public show of discontent for decades.

In his trademark humor, Navalny lamented on Twitter shortly before he was led out of the courtroom that he would have to skip a Depeche Mode concert while he is in jail.

The demonstrators appeared to skew predominantly younger — those who were born or grew up during Putin's 17 years in power. Similar crowds turned out on March 26, rattling officials who had perceived the younger generation as largely apolitical.

Three 16-year-old girls brought sheets of paper to the Moscow protest and sat on the pavement to write the articles of the Russian Constitution on them; a nearby group of teenagers climbed atop of a tent with posters saying, "Corruption kills the future." Other protesters scaled a scaffold and hung a sign saying, "Only revolution will defeat corruption."

School and university staff who reportedly reprimanded their students for attending the March protests warned them against going to Monday's rally.

Ivan Sukhoruchenkov, 19, attended anyway with four university classmates to protest what he described as "stagnation of the political system."

"Change is always good," Sukhoruchenkov said, adding that he and his friends were concerned about corruption — Navalny's rallying cry — that "manifests itself in all areas: from traffic police to university professors."

Navalny had called the anti-corruption demonstrations, and they drew crowds of several dozen to the 10,000 in St. Petersburg. Some of the rallies were sanctioned by authorities and peaceful, but police cracked down brutally on others.

Although it was not immediately clear if Monday's protests were larger than those in March, they underlined the deep dismay with the government. Putin is expected to seek another term in 2018, and Navalny has already announced his intentions to run.

Moscow officials had agreed to allow Navalny's rally, but late Sunday, he said official interference had prevented contractors from erecting a stage at the agreed-upon venue and instead urged demonstrators to gather on Tverskaya Street, which was closed to traffic for the Russia Day festivities.

Most of the Moscow protesters appeared to be under 30, although there was a sizeable number of middle-aged people and couples with children.

With opposition sentiment strong or even growing, authorities appear to be seeking a strategy to undermine the opposition without provoking more animosity.

Authorities allowed the unsanctioned rally to proceed, although riot police cut the crowd in half and began pushing the lines while grabbing some people from the crowd. Some of the arrests were violent with police using batons and dragging people along the street.

In Washington, White House press secretary Sean Spicer told reporters the United States "strongly condemns the detention of hundreds of peaceful protesters" which he described as an "affront to core democratic values." Spicer called on the Russian government to immediately release all peaceful protesters.

Navalny rose to prominence for detailed open-source investigations of government corruption. That was a key issue Monday for protesters, particularly his report on vast wealth allegedly acquired by Prime Minister Dmitry Medvedev.

"We are against the corruption that is costing the future of our young people," said Moscow protester Maria Badyrova, a 33-year-old finance specialists who came to the rally with a Russian flag.

Alexei Borsenko, a Vladivostok demonstrator who eluded a police attempt to detain him, cited Iceland's prime minister stepping down in the fallout from the "Panama Papers" scandal, while "our prime minister is caught on such big corruption cases and he doesn't go anywhere."

"This is very strange," Borsenko added. "It's a dead end for the country's development."

The popular anger has spread beyond Medvedev, with many demonstrators chanting "Putin is a thief" within earshot of the City Hall that later dismissed the protests as an "overt provocation."