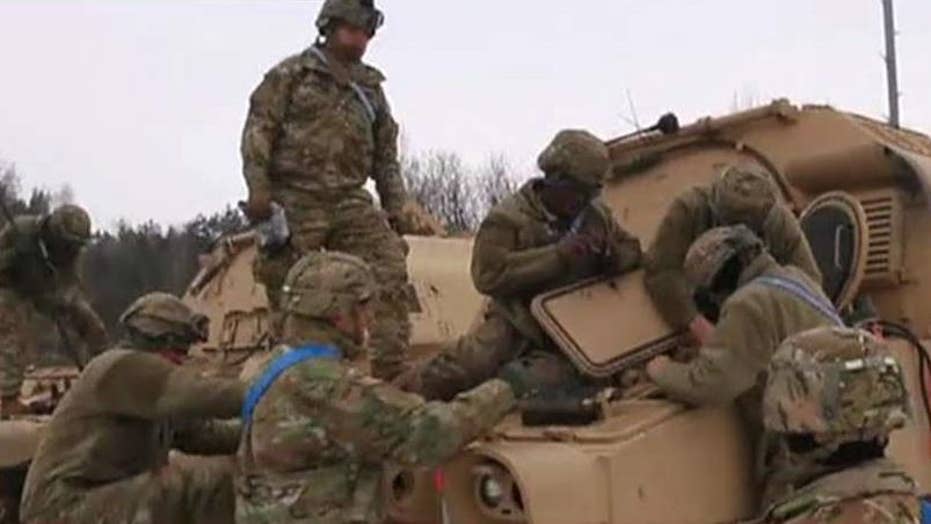 US deploys US troops on tanks to Poland

Thousands of U.S. troops crept up on Russia's doorstep Thursday, rolling into Poland amid a slew of unanswered questions about their future in the region.

RUSSIA STEPS UP MILITARY PRESENCE IN SYRIA, DESPITE PUTIN PROMISE

It marked the first deployment of armored brigade combat teams and armor to Europe after a long drawdown from the continent. For decades, Poland had asked for help in keeping Moscow at bay, but at the same time, President-elect Donald Trump has signaled he could try to pursue a friendly relationship with Russian President Vladimir Putin.

Still, the president-elect said Wednesday nothing was off the table. "I don't know that I'm going to get along with Vladimir Putin. I hope I do. But there's a good chance I won't."

TURKEY BOGGED DOWN IN SYRIA AS IT REALIGNS WITH RUSSIA

Russia clearly wasn't happy with the deployment. "We perceive it as a threat," President Vladimir Putin's spokesman Dmitry Peskov said. "These actions threaten our interests, our security, especially as it concerns a third party building up its military presence near our borders."

Moscow also announced it deployed anti-aircraft missile systems around the city. Russia had already been using the s-400 Triumph air defense system, capable of hitting moving targets including missiles and planes, in Syria, The Sun reported.

Soldiers in camouflage with tanks and other vehicles crossed into southwestern Poland on Thursday morning from Germany and headed for Zagan, their planned base. Poland's prime minister and defense minister said they would attend official ceremonies Saturday celebrating the Americans' arrival.

The deployment "symbolizes a turn in our efforts on this front, and is an important part of our continued effort to deter Russian aggression and maintain a free Europe," U.S. European Command spokeswoman Meghan Henderson responded.

U.S. and other Western nations have carried out exercises on NATO's eastern flank, but this deployment -- which includes around 3,500 U.S. troops -- marks the first-ever continuous deployment to the region by a NATO ally. It represents a commitment by President Barack Obama to protect a region that became deeply nervous when Russia stormed Ukraine and took over Crimea in 2014, and then began backing rebels in Ukraine's east.

The deployment was "separate yet complementary to NATO's deterrence and defense activities," Henderson added.

Many people in Poland said they still felt betrayed by Obama's own "reset" with Russia early on in his administration, which involved abandoning plans for a major U.S. missile defense system in Poland and replacing it with plans for a less ambitious system.

Many U.S. soldiers said they were optimistic. "Hopefully we can get right into training, get some range time in and have some fun," Spc. Kyle Smith, an infantryman with the 1st Battalion, 8th Infantry Regiment, told Stars and Stripes.