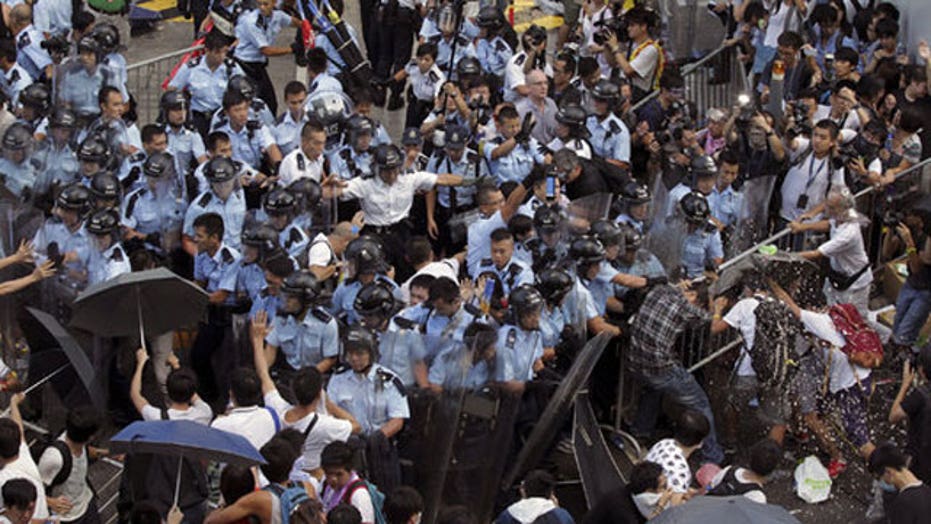 HONG KONG – Protesters spent a peaceful night singing as they blocked streets in Hong Kong in an unprecedented show of civil disobedience to push demands for genuine democratic reforms.

But officials announced that schools in some districts of Hong Kong would remain closed Tuesday because of safety concerns, while dozens of bus routes were canceled and some subway stops near protest areas were closed.

Local media also reported that protest organizers had vowed to step up their protests if the government had not responded to their demands by Wednesday, which is a holiday for China's National Day.

"The students are protecting the right to vote, for Hong Kong's future. We are not scared, we are not frightened, we just fight for it," said Carol Chan, a 55-year-old civil service worker who took two days off to join the protests after becoming angered over police use of tear gas Sunday.

Students and activists have been camped out since late Friday, demanding that Beijing grant democratic reforms to the former British colony.

The government said it was canceling a fireworks display planned for Wednesday's celebration of National Day. Thursday is also a holiday, and even larger crowds are expected to flood the streets.

Police said they used 87 rounds of tear gas Sunday in what they called a necessary but restrained response to protesters pushing through cordons and barricades. They said 41 people were injured, including 12 police officers.

"Police cordon lines were heavily charged, by some violent protesters. So police had to use the minimum force in order to separate the distance at that moment between the protesters and also the police," said Cheung Tak-keung, the assistant police commissioner for operations.

The atmosphere was more festive Monday as constantly shifting crowds blocked major roads. People moved in and out of the sit-ins, some bringing in food and drink while others fetched their own. Some high school students, still in their school uniforms, sat on the pavement doing their homework.

"It's already the fourth day, so it's really tiring," said Ching-ching Tse, a 24-year-old student at the Chinese University of Hong Kong who was on her second day of collecting trash in the protest area with her friends. "So we are forming some groups and hope we can do some shifts and take turns."

While many Hong Kong residents support the calls for greater democracy — dubbed the "umbrella revolution" by some, although the crowds' demands fall far short of revolution — the unrest worries others.

"I strongly disagree with the protesters," said an older woman who gave only her surname, Chan. "Those of us who came to the city 60 or 70 years ago had nothing and we worked and suffered so much to make Hong Kong the rich city it is today. And now the protesters have made our society unstable. For me, being able to eat and sleep is already a luxury. I don't need democracy. What does it mean?"

Many younger Hong Kong residents raised in an era of plenty and with no experience of past political turmoil in mainland China have higher expectations. Under an agreement set in 1984, before most of them were born, Beijing promised to allow Hong Kong residents civil liberties — unseen in the rest of China — after it took control of the city of 7.1 million in 1997.

The protesters are dismayed by China's decision last month that candidates in the city's first-ever election for its top leader must be hand-picked by a committee of mostly pro-Beijing tycoons. That move is viewed by many residents as reneging on promises to allow greater democracy in the semi-autonomous territory, since Beijing had promised that the chief executive would eventually be chosen through "universal suffrage."

China's communist leaders take a hard line against any threat to their monopoly on power, including clamping down on dissidents and Muslim Uighur separatists in the country's far west, but it cannot crack down too harshly on the semi-autonomous territory where a freewheeling media ensures global visibility.

Across the border, Chinese state media have provided scant coverage of the protests beyond noting that an illegal gathering spun out of control and was being curtailed by police.

The protests began a week ago with a class boycott by university and college students demanding reforms of the local legislature and a withdrawal of Beijing's requirement that election candidates be screened.

"People are feeling a kind of guilt that they were allowing the young kids in their late teens and early 20s to take all the risks, so people are coming out to support them," said Steve Tsang, a senior fellow at the University of Nottingham's China Policy Institute.

Occupy Central on Monday urged Leung to resign, saying his "non-response to the people's demands has driven Hong Kong into a crisis of disorder."