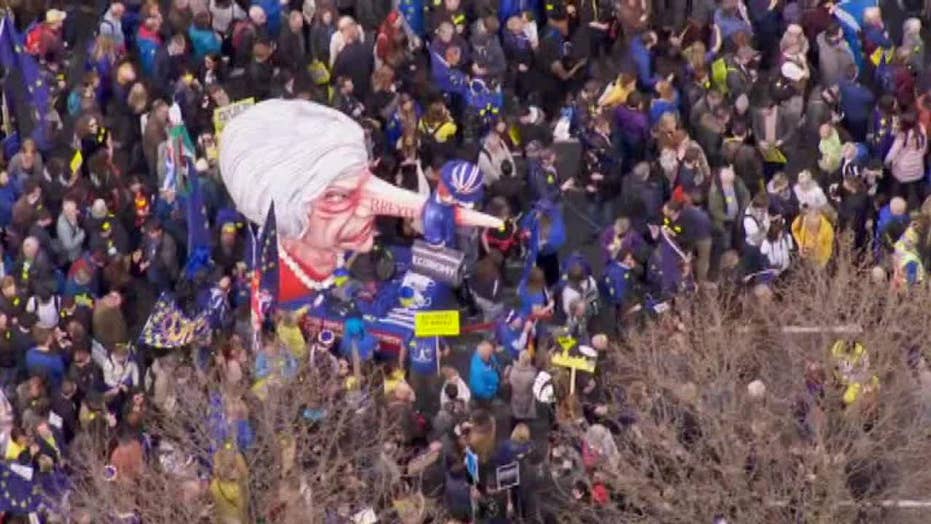 Crowds gather in London to protest against Brexit

Theresa May could quit as soon as Wednesday as the Brexit chaos deepens - in a last-ditch bid to win a third and final vote on her deal.

The Prime Minister has summoned all Tory MPs to a closed-doors Commons meeting Wednesday night.

Westminster insiders believe she could use the "1922 Committee" meeting to lay out a timetable for her resignation in a last-ditch bid to get her Brexit deal over the line.

Britain's Prime Minister Theresa May makes a statement on Brexit to lawmakers in the House of Commons, London, Monday March 25, 2019. May is under intense pressure Monday to win support for her Brexit deal to split from Europe. (House of Commons via AP)

Furious Brexiteers may come round to the withdrawal agreement if Mrs May guarantees she won't be in place during talks over a future trade deal.

Today MP Tim Loughton said: "If she gets her deal through, we need somebody else controlling the process."

In a boost for Mrs May, top Brexiteer Jacob Rees-Mogg finally admitted he will be forced to support her deal when it returns to the Commons.

He previously said he'd only back the withdrawal agreement if the DUP, who are essential for the Prime Minister's Commons majority, also supported it.

Mrs May's desperate gambit comes after Remainer MPs grabbed control of the Government and won the right to decide what they want to happen next.

Ministers are now openly discussing the possibility of dissolving Parliament and heading for an early election.