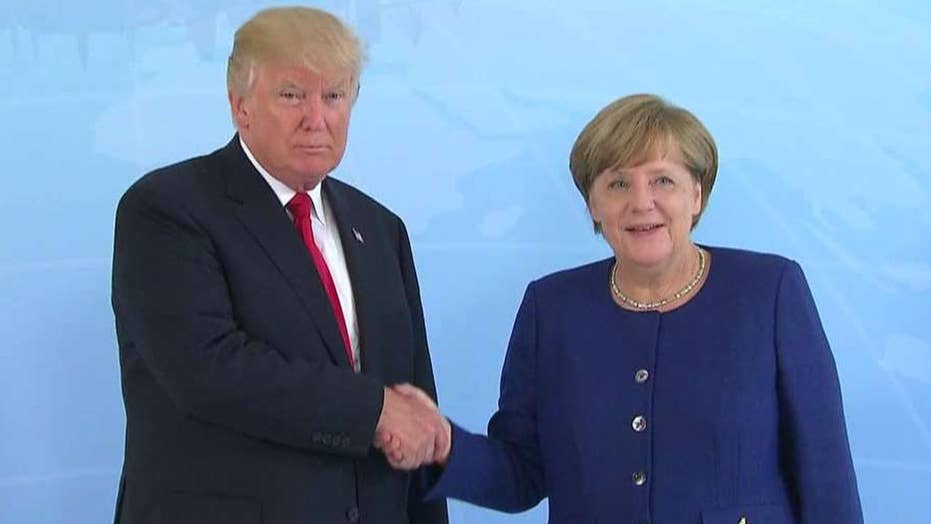 Trump meets with Merkel ahead of G20 summit

President Donald Trump and German Chancellor Angela Merkel will meet immediately after he arrives in Germany to attend an international summit.

The White House says Trump and Merkel are to meet privately Thursday night at a hotel in Hamburg before members of their delegations join the talks.

Merkel remains disappointed in Trump's decision last month to withdraw the U.S. from the Paris climate agreement. She has called it "extraordinarily regrettable" and has noted that numerous U.S. states and cities want to continue participating.

Trump says he withdrew because the pact was unfair to the United States.

Merkel also said this week that she stands by her suggestion that Europe can no longer entirely rely on the U.S. She said Germany and China can work together to help calm world troubles.

The Trump administration is renewing an offer to cooperate with Russia in the Syrian conflict, including on military matters, ahead of President Donald Trump's meeting with Russian leader Vladimir Putin this week.

Secretary of State Rex Tillerson says the U.S. is open to establishing no-fly zones in Syria in coordination with Russia as well as jointly setting up a truce monitoring and humanitarian aid delivery mechanism.

His comments come as Trump prepares to meet with Putin on Friday in Germany.

Tillerson says the U.S.-Russia cooperation would create stability in Syria as U.S.-backed forces continue their assault on the Islamic State group.

Tillerson says the group has been "badly wounded" and may be on the "brink of complete defeat," but adds that Russia has to play a constructive role.

President Donald Trump has arrived in Poland ahead of an outdoor address in Warsaw on Thursday and energy talks with European leaders.

Air Force One landed in Warsaw on Wednesday night to kick off Trump's visit to Poland and Germany, where he will attend an international summit with world leaders.

Trump is expected to receive a friendly welcome in Poland despite skepticism in Europe following his first visit to the continent.

Trump will address the Polish people on Thursday in a speech from Krasinski Square and have meetings with the presidents of Poland and Croatia. He's also expected to discuss energy with about a dozen European leaders.

The visit will come before Trump's high-profile meeting with Russian President Vladimir Putin at the G-20 summit Friday.