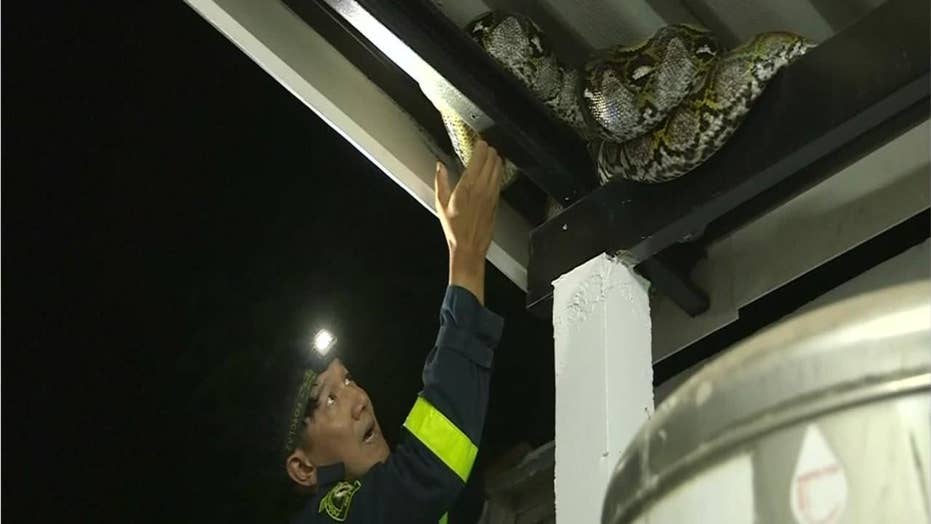 Many homes in Bangkok are paid visits by venomous snakes. Most live in underground canals and make their entrance through toilets. In 2018, there were close to 40-thousand reports of home intrusions by snakes around the Thai capital.

This Thai firefighter is familiar with both snakes and ladders — wrangling serpents with his bare hands as part of his duties.

Pinyo Pukpinyo, 50, recently responded to a call of a 16-foot python slithering through the rafters of a home in Bangkok, where snake intrusions are far more common than fires.

Pukpinyo has wrangled snakes for 16 years, catching about 10,000 during his career, according to Reuters. He said he traps about 800 snakes in a year, most of them nonvenomous pythons.

The residents filmed him grabbing the snake with his bare hands and pulling it from the beam it had wrapped itself around, the news outlet reported. He wrestled it to the ground and into an empty rice sack.

“I think using equipment to catch snakes can be hurtful to them,” he told Reuters. “But with bare hands, it becomes the process of learning and understanding the real nature of snakes."

But on several occasions Pukpinyo has been bitten by the reptiles, some of them venomous. While he’s been bitten by pit vipers and other snakes, it was a king cobra bite in May 2018 that left his right thumb disfigured, according to the South China Morning Post.

Bangkok has become a haven for snakes, with 37,000 reports of the reptiles invading homes in 2018, the paper reported. The snakes feed on the local frogs, rats and sometimes larger animals like dogs.

Pukpinyo said he also cares for the captured snakes at the fire station and gives classes on how to safely handle them.

"I want people to have a better understanding of the relationship between human and animals, and that we can live together,” he told Reuters. “There is no need to harm or kill them, we can just learn to live together. This is my goal, which makes me happy enough."