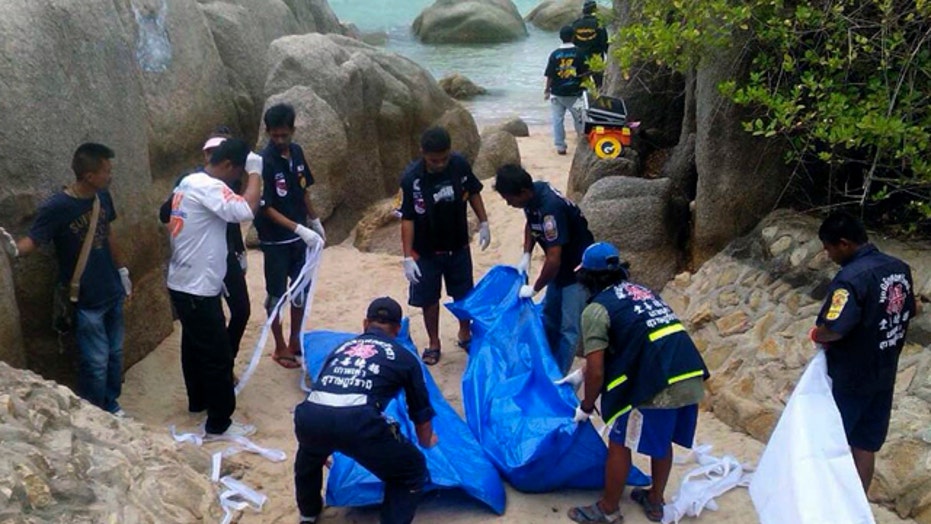 Bodies found in rocky alcove along shore close to their hotel

Police in Thailand reportedly are looking to question an acquaintance of one of the two British tourists who were found murdered on a scenic resort island Monday morning.

Police on Koh Tao in southern Thailand conducted a sweep of hotels and workers' residences Tuesday searching for clues into the killings of 23-year-old Hannah Witheridge and 24-year-old David Miller. Both had deep wounds and gashes to the head and face that police believe were inflicted by a bloodied hoe found near the bodies.

The pair traveled to Koh Tao with friends and met each other on the island while staying in neighboring rooms at Ocean View Bungalows, said police Maj. Gen. Kiattipong Khawsamang.

"They went out to a bar and left together after 1 a.m. (Monday), according to closed circuit TV camera footage," he said.

Police have released still images from surveillance cameras in the area. One showed what police said were the two victims walking together hand-in-hand. Another image from later in the morning showed a single man walking in the same direction.

Police said the man looked Asian and was considered a prime suspect, but investigators were pursuing several leads.

“We are focusing on migrant workers because of the surrounding witnesses and evidence, including the video footage," Kiattipong said. "We are sweeping hotels, bars, businesses and residences of migrant workers on the beach to find the suspect."

Police also told The Telegraph that they are looking to speak to a friend who had been travelling with Miller.

The newspaper reported that police had circulated the man's name internally, but could not release it publicly.

"We need to talk to him as a matter of urgency," Police Col. Songsak told The Telegraph. However, authorities feared that the man may have already fled the island the night of the murders, taking a ferry to Bangkok.

Another police official, Col. Prachum Ruangthong, said investigators were also looking for a group of bar employees and had questioned a group of foreigners as well.

"This morning we surrounded three locations, including the residences of migrant workers, to search and collect DNA," Prachum said Tuesday.

On Monday night, about 100 local residents gathered on Sairee Beach for a candlelit vigil and said prayers for the young British couple close to the spot where their bodies were found.

The bodies of Witheridge, from Great Yarmouth, Norfolk, and Williams, from Jersey, Channel Islands, were being sent Tuesday to forensic police in Bangkok.

The attack came amid government efforts to revive Thailand's tourism industry after a military coup in May ended prolonged, sometimes violent political protests. Martial law remains in effect in many parts of Thailand.

Koh Tao, which is about 250 miles south of Bangkok, is known as a quiet, small and scenic island. It's a short boat ride from the better-known resort islands of Koh Samui and Koh Phangan, the latter known for its raucous "full moon" parties that attract young travelers from Thailand and abroad.