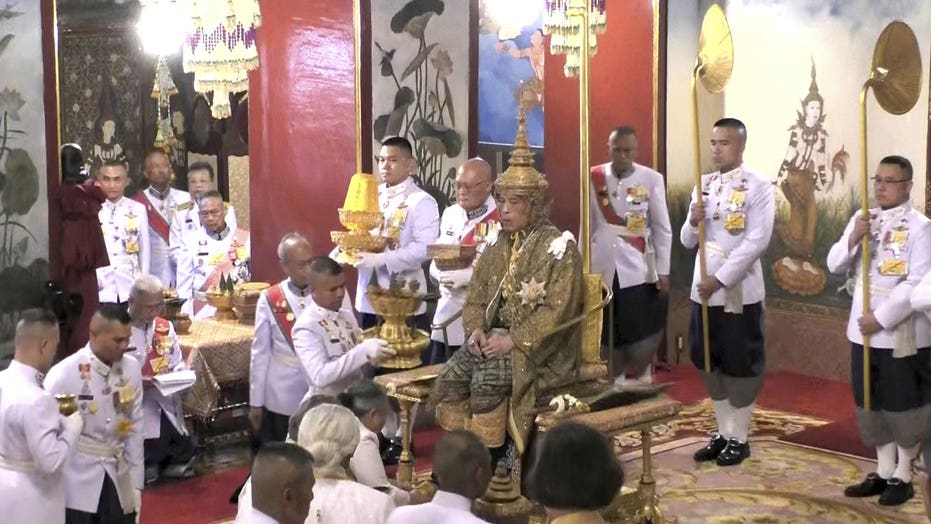 Thailand’s King Maha Vajiralongkorn has officially assumed the title at the start of a three-day-long, centuries-old coronation ceremony.

The coronation on Saturday comes after the previous king, King Bhumibol Adulyadej, died back in October 2016 at the age of 88.

After completing the rites on the first day, Vajiralongkorn issued a royal command that is supposed to represent the tone of his upcoming reign of the country that is still reckoning with a 2014 military coup and a contentious election less than two months ago.

In this image made from the video, Thailand’s King Maha Vajiralongkorn, center, sits on the throne as he is officially crowned king at the Grand Palace, Saturday, May 4, 2019, in Bangkok, Thailand. Saturday began three days of elaborate centuries-old ceremonies for the formal coronation of Vajiralongkorn. (Thai TV Pool via AP)

“I shall continue, preserve, and build upon the royal legacy and shall reign with righteousness for the benefit and happiness of the people forever,” the king said, according to the Associated Press’ translation.

The newly-minted 66-year-old king has already been acting as a king after his father’s death. He officially received his crown from the chief Brahmin, a Hindu priest who played a guiding in the mixed Buddhist-Hindu ceremony.

Vajiralongkorn has been on the throne for more than two years following the death of his father, King Bhumibol Adulyadej, who died in October 2016 after seven decades on the throne. (Thai TV Pool via AP)

Vajiralongkorn then placed the crown atop his head. The crown, called the “Great Crown of Victory,” is believed to date back to 1782 and is about 26 inches wide and weighs 16 pounds.

Thailand ended the absolute rule of monarchs during a 1932 revolution, instituting a constitutional monarchy. Yet while the king’s power has been diminished, they are held by the public in high esteem and thought as almost divine.

The king also plays a unifying role in a country that is often in political turmoil due to partisanship and the influence of the military.

But Vajiralongkorn has already made some changes in the power of the crown, including centralizing royal authority in his hand and allowing himself to intervene in government affairs.

His moves weren’t met with criticism as he’s protected by the world’s strictest lese majeste laws that makes any criticism of him or other top royals an offense punishable by up to 15 years in prison.