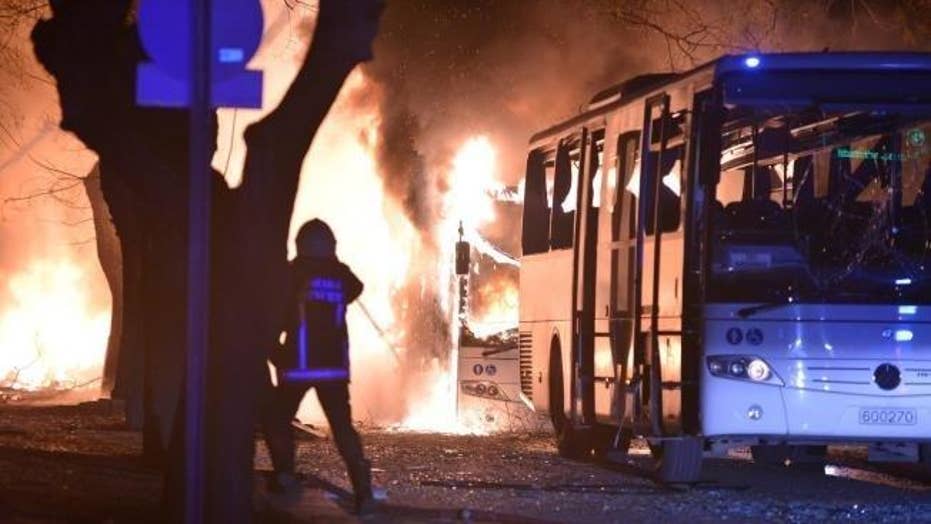 An explosion targeting Turkish military buses carrying personnel killed at least 28 people and wounded 61 others in the capital city of Ankara Wednesday, in what government officials called an intricately planned act of terror.

The U.S. Embassy in Ankara activated "duck and cover" following the nearby explosion, a U.S. government source told Fox News.

"We believe that those who lost their lives included our military brothers as well as civilians," Deputy Prime Minister Numan Kurtulmus said. The buses were waiting at traffic lights at an intersection, the Turkish military said while condemning the "contemptible and dastardly" attack.

At least two military vehicles caught fire and dozens of ambulances were sent to the scene. Dark smoke could be seen billowing from a distance.

It was not clear who was behind the bombing. Kurdish rebels, the Islamic State group and a leftist extremist group have carried out attacks in the country recently.

Turkish President Recep Tayyip Erdogan said the attack exceeds all "moral and humane boundaries," and that his country is determined to fight the "forces" behind the attackers.

The U.S. State department also condemned the attack, adding, "We extend our deepest condolences to the families of those killed, and we wish a quick recovery to those injured."

The explosion, believed to be a car bomb, occurred at the height of the evening rush hour in an area some 328 yards away from military headquarters, governor Mehmet Kilicer said.

Also calling the bombing a "terrorist attack" in a statement, NATO's secretary general Anders Fogh Rasmussen offered his "deepest condolences to the families of those killed and to the Turkish people."

Witnesses reacting to the explosion in Ankara. (IHA via AP)

Turkey's prime minister Ahmet Davutoglu canceled a planned visit to Brussels in order to attend a security meeting with President Recep Tayyip Erdogan and other officials.

In October, suicide bombings blamed on ISIS targeted a peace rally outside the main train station in Ankara, killing 102 people in Turkey's deadliest attack in years.

Wednesday's attack comes at a tense time when the Turkish government is facing an array of challenges. A fragile peace process with the Kurdish rebels collapsed in the summer. The Turkish security forces have been engaged in large-scale operations against Kurdish militants in the southeast since December, imposing controversial curfews in flashpoint areas, and the fighting has displaced tens of thousands of civilians.

Turkey has also been helping efforts led by the United States to fight ISIS in neighboring Syria, and has faced several deadly bombings in the last year that were blamed on that terror group.

The Syrian war, meanwhile, is raging along Turkey's southern border. Recent airstrikes by Russian and Syrian forces have prompted tens of thousands of Syrian refugees to flee to Turkey's border. Turkey so far has refused to let them in, despite being urged to do so by the United Nations and European nations, but is sending aid to Syrian refugee camps right across the border.

Turkey, which is already home to 2.5 million Syrian refugees, has also been a key focus of European Union efforts to halt the biggest flow of refugees to the continent since World War II. Hundreds, sometimes thousands, of refugees leave every night from Turkey to cross the sea to Greece in smugglers' boats.