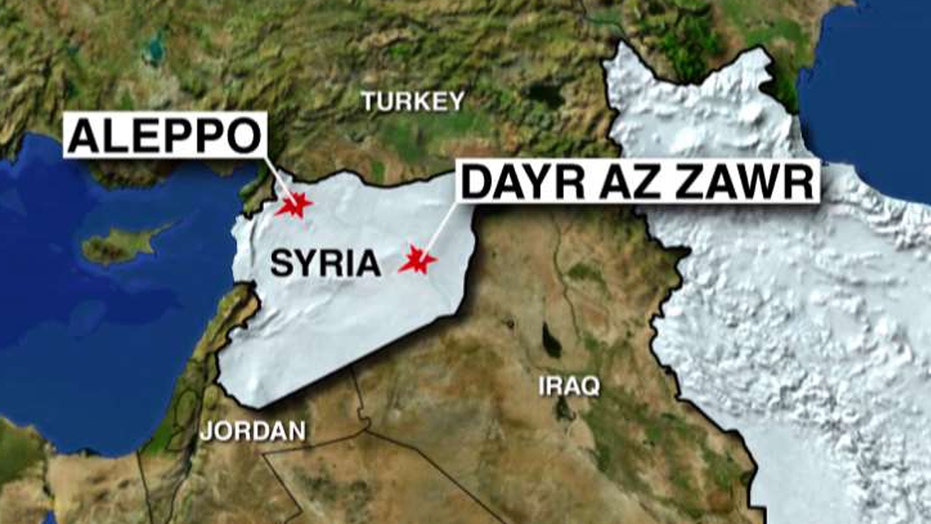 Region is in the middle of fragile peace agreement

BEIRUT – Syria's fragile cease-fire started to unravel on Sunday with the first aerial attacks on rebel-held neighborhoods of Aleppo and a southern village that killed at least eight people, violations that came as tensions between the American and Russian brokers of the deal worsened following a deadly U.S. strike on Syrian government forces.

The air raid by the U.S.-led coalition killed dozens of Syrian soldiers and led to a harsh verbal attack on Washington by Damascus and Moscow. The U.S. military says it may have unintentionally struck Syrian troops while carrying out a raid against the Islamic State group in eastern Syria on Saturday.

The seven-day cease-fire is supposed to end at midnight Sunday, according to a Syrian army statement issued last week. The U.S. and Russia have said that if it holds for seven days, it should be followed by the establishment of a Joint Implementation Center for both countries to coordinate the targeting of Islamic State and Al Qaeda-linked militants.

Despite largely holding, the cease-fire has been repeatedly violated by both sides, and aid convoys have not reached besieged rebel-held neighborhoods of Aleppo, Syria's largest city and one-time commercial center, which has been the center of violence in recent months. Aid delivery to Aleppo is part of the U.S.-Russia cease-fire deal.

Earlier this month, Syrian government forces and their allies captured areas they lost south of the city, re-imposing a siege on its opposition-held eastern neighborhoods. More than 2,000 people were killed in 40 days of fighting in the city, including 700 civilians, among them 160 children, according to a Syrian activist group.

Syrian state TV reported Sunday that dozens of residents had left rebel-held areas in Aleppo and were taken to shelters in the government-controlled part of the city.

Also Sunday, Aleppo's governor, Hussein Diab, called on insurgents in the eastern neighborhoods to turn themselves in, hand over their weapons and take advantage of an amnesty decree issued recently by Syrian President Bashar Assad.

"We are at a new stage that requires making the decision to embrace reconciliation," Diab said in a statement carried by the state news agency, SANA. He urged insurgents to halt what he called the bloodshed and destruction and affirmed that all who turned themselves in and surrendered their weapons would be treated well and allowed to return to normal life.

Moscow laid the blame for Sunday's violence squarely on the opposition. Russian Defense Ministry spokesman Maj. Gen. Igor Konashenkov said in an emailed statement that both "terrorists and the opposition" are using the truce to "boost their forces and prepare for renewed hostilities."

Konashenkov says Moscow still has not been able to contact the U.S.-backed opposition to coordinate cease-fire efforts despite Washington's assurances. He said the U.S. has not even tried to get the opposition to hold its fire.

U.S. Secretary of State John Kerry fired back in an interview with CNN, saying Russia needs to stop Assad from attacking the opposition and blocking aid delivery.

Kerry said Assad was a "spoiler" in the cease-fire, and called on Moscow to "stop the grandstanding, stop the showboating, and get the humanitarian assistance going."

Kerry also said it was important to set up the Joint Implementation Center in order to prevent the "terrible thing that happened yesterday, that we all acknowledge and regret but it happens when you have conflict." He appeared to be referring to the U.S.-led airstrikes in eastern Syria.

Syria called Saturday's U.S.-led strikes on the outskirts of the eastern city of Deir el-Zour a "dangerous and blatant aggression against the Syrian Arab Republic and its army."

The Foreign Ministry's statement, sent to the U.N. Security Council, said American warplanes repeatedly attacked Syrian army positions on Saturday afternoon. It said the airstrikes were "on purpose and planned in advance," and killed dozens of Syrian soldiers.

Australian planes were also involved in the errant air raid. Defense Minister Marise Payne told Australian Broadcasting Corp. on Monday that Australia is taking part in a U.S. review of the airstrikes. She declined to say whether Australia fighter jets were involved or support aircraft.

Australian Prime Minister Malcolm Turnbull told reporters in New York on Sunday that he regrets "the loss of life and injury to any Syrian personnel affected." He saidAustralian rules of engagement were to target the Islamic State movement.

Russia's military said it was told by the Syrian army that at least 62 Syrian soldiers were killed in the Deir el-Zour air raid and more than 100 wounded. The Russian air force has been carrying out strikes across Syria to bolster Assad's forces for nearly a year, and the two militaries work in close coordination.

The Britain-based Syrian Observatory for Human Rights, which relies on a network of activists inside Syria, put the toll higher, saying the U.S.-led coalition struck army positions in Tharda mountain and a nearby artillery division, killing 90 troops and wounding 110.

The Americans "not only turned out to be unable to give an adequate explanation of what happened, but also tried, as is their custom, to turn everything upside down," the statement said.

Earlier Sunday, the state-run SANA news agency quoted an unnamed military official as saying that dozens of IS fighters were killed in the air and ground offensive on Tharda mountain. ISIS had claimed that its fighters captured Tharda mountain, which overlooks the city's government-controlled airport.

The Syrian military official said government troops had regained control of areas the extremists captured "as a result of the American aircraft aggression."

State TV later reported that a Syrian warplane was shot down while carrying out attacks on ISIS militants in Deir el-Zour province, adding that the pilot was killed. ISIS-linked media also reported the incident.

The Observatory said that intense airstrikes by Russian warplanes had killed at least 38 ISIS fighters since Saturday.

The Syrian military said the coalition airstrike hit a base in Deir el-Zour that was surrounded by ISIS, allowing the extremists to advance and overrun Syrian army positions in the area.

Tens of thousands of people live in government-held neighborhoods of Deir el-Zour under an ISIS siege. Government areas have been relying on airlifted aid. ISIS also controls much of the surrounding province, which borders Iraq.

Also Sunday, the Syrian government and opposition reported violations of the cease-fire. The cease-fire does not include ISIS and Al Qaeda-linked militants.

Syrian state media said insurgents shelled residential areas in the northern city of Aleppo and the central province of Homs.

The Observatory and Ahmad al-Masalmeh, an opposition activist based in the southern province of Daraa, said government helicopters dropped barrel bombs on the village of Dael, killing at least eight and wounding a large number of people. In Aleppo, warplanes fired missiles at three neighborhoods, wounding several people, according to the activist-run Local Coordination Committees and the Observatory.