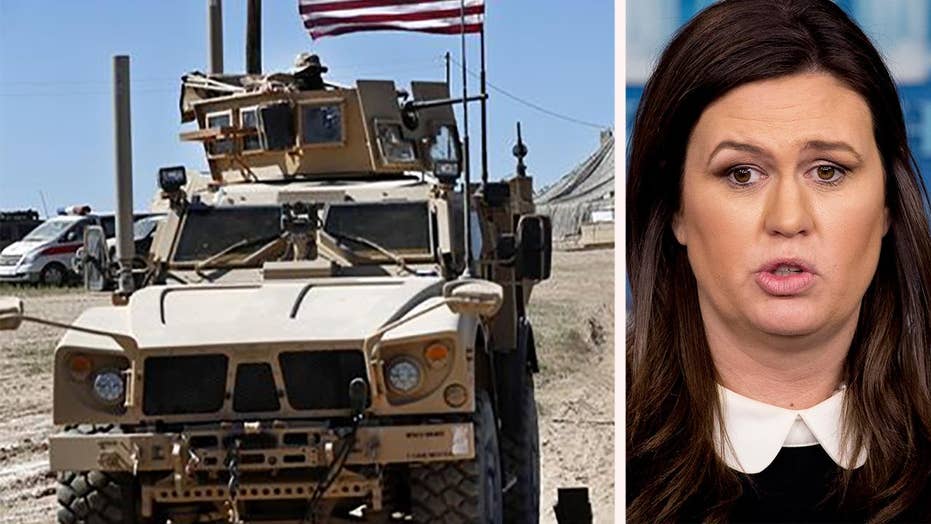 White House confirms U.S. troops in Syria are being brought home and the transition has begun after ISIS has been 'defeated'

Wednesday's surprise announcement that the U.S. will quickly withdraw all its troops from Syria is the stuff of nightmares for many of the Kurds living under the protection of U.S forces and the American-backed Syrian Democratic Forces (SDF).

“Everyone is upset, sad and afraid,” one SDF member from the Kurdish-dominant Syrian city of Kobane told Fox News. “It’s a historic mistake. We wanted to be part of America. We are surrounded by enemies, and ISIS isn’t even finished yet.”

Most who spoke to Fox News were scared to use their names or publish their faces, in case the Assad-controlled Syrian regime retakes the area and retaliates against those who have spoken out. But most of all, the millions in the region left in limbo are concerned about strikes from the Turkish side of the border.

“Everyone is confused and scared. This will mean that Turkey will likely attack us. We are in shock because we thought the U.S. would help us achieve peace after ISIS. We didn’t think that they would help us defeat the terrorists and then leave us alone to face the horror of Turkish forces and its extreme factions,” lamented Mazloum Kurdy, a 33-year-old father and teacher from Kobane. “Now people are thinking to displace themselves from their homes here again, but nobody knows where a safe place to go is.”

In his words, it is an ultimate betrayal by the United States.

Earlier this year, Turkish-backed forces took control of the Kurdish-dominant town of Afrin, prompting a quagmire for the United States as many were forced to abandon their posts fighting ISIS and fight for Afrin – a fight that was ultimately lost. In recent days, Turkish President Recep Tayyip Erdogan has threatened to imminently launch a similar offensive against the Kurdish troops trained and equipped by the U.S to battle ISIS.

Turkey's issue is that elements of the SDF are members of the People's Protection Units (YPG), a military force generally considered an offshoot of the Kurdistan Workers Party (PKK), which has waged an on-and-off separatist war against Turkey since the 1980s. The PKK is a designated terrorist organization both in Turkey and the United States, and the YPG's involvement in the region has been a hot point of contention between the Turkish government and the U.S.

Just hours after White House announced it will pull all U.S. troops out of Syria, the State Department announced plans to sell $3.5 billion worth of Patriot surface-to-air missiles to Turkey.

Nonetheless, Dana W. White, Chief Defense Department spokesperson, stated Wednesday they have “started the process of returning U.S. troops home from Syria” as they “transition to the next phase of the campaign.” White declined to provide further details “for force protection and operational security reasons.”

Sources told Fox News the abrupt decision – which appeared to have been leaked before all arrangements were put in place and part of a non-disclosed timeline that had been put in place without the knowledge of many – came as a sudden surprise, and that many involved in Syria were simply “not happy” about the withdrawal.

“And by withdrawal, it is complete, down to zero,” one Pentagon insider said, noting that it will likely take a little over a month to complete.

Kurdish leaders were said only to be informed of the president’s decision Wednesday. And over the course of several meetings over the past few days, Defense Secretary Jim Mattis tried – apparently unsuccessfully – to dissuade Trump from the decision.

Abandoning the Kurdish allies, some officials fear, will not hinder future efforts to enlist local ground troops globally but will only further embolden enemy forces.

And while President Trump tweeted that ISIS is “defeated,” others on the ground disagree, underscoring the brutal terror group stubbornly remains holed up in pockets near the Iraq border, and under daily assault by the SDF.

Aykan Erdemir, a former member of the Turkish parliament and a senior member at the Foundation for the Defense of Democracies, said the announcement couldn’t have come at a better time for Turkish President Erdogan.

“The U.S withdrawal from Syria would be a great gift for the Turkish president in the run-up to the country's upcoming municipal elections scheduled for March 2019. The Turkish leader will present this as a win against the U.S. and exploit it to boost his image at home,” Erdemir said. “The Syria pullout would also open the way for Ankara's cross-border operations against Syrian Kurdish rebels, offering Erdogan another rally-round-the-flag opportunity during the campaign period. Today's news will, therefore, be celebrated not only in Tehran and Moscow, but also in Ankara.”

"The decision, if carried out precipitously, would leave the U.S.-allied Syrian Democratic Forces twitching in the wind. Both Turkey and Syria want to eliminate the YPG as a military actor,” he said. “The Trump administration should use the leverage of its intended withdrawal to negotiate a deal that would restore Syrian sovereignty over its border but grant a degree of autonomy to the Kurds and also prevent the return of ISIS".

Others argue Trump is only doing what he intended to do all along.

“While we must always worry about the long-term ramifications of removing U.S. forces—they can act as a stabilizing force in the region—by and large, at only 2,000 or so troops, they are not a game changer in Syria,” asserted Harry Kazianis, an expert at the Center for the National Interest’s Director of Defense Studies. “This should not impact the Kurds in any dramatic way as long as Washington is able to coordinate its actions in a way the does not destabilize or let anyone think they can fill a vacuum left by Washington—such as Turkey or say Russia.”

In early April, soon after Trump remarked that U.S. troops would be pulling out “very soon,” concerns were already bubbling over in the Syrian streets.

“The most important thing is we know we won’t be bombed when the U.S. is here,” Khalid, a 31-year-old mobile phone seller and a graduate of Homs University. “If they leave, we worry Russians will be the first to come and bomb us. Right now we are calm and comfortable.”

Mahmoud, a 60-year-old purveyor of sweets, also expressed gratitude over being spared the aerial bombardment that has ravaged much of Syria. “Of all the players in Syria, America is better than the others,” he said. “Seven years of this war and no one else has come to take care of us.”

But for now, their future is anybody’s guess. “People consider the USU cheated because we thought they wanted to bring stability to Syria,” Kurdy added. “But right now, people are praying and hoping the decision might change.”