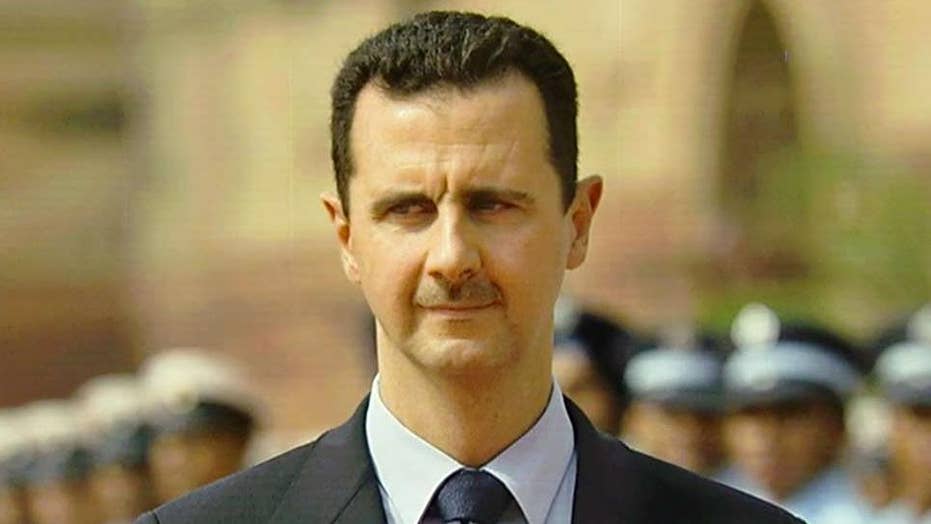 The U.S. State Department is investigating an alleged chlorine gas attack by the Syrian regime during a recent offensive against rebel forces; Trey Yingst reports.

Just after 9 a.m  Sunday, witnesses on the ground in the remote Syrian countryside near the border of Idlib province claimed they saw more than 40 rockets slash through the sky, along with three different-looking shells that landed in a thud of yellowish smoke. These were described as large cylinders that did not explode, yet produced a strong chemical smell.

“On May 19, we received information about an attack using toxic gases in a fight between the Syrian military and ‘revolutionary’ military. I was informed to be ready. Four people came with red eyes, struggling to breathe, headaches,” Idlib-based Dr. Ahmad, who claims to have treated the wounded, told Fox News by phone Thursday. “We took off their clothes, put them in water, and gave them oxygen. They smelled of chlorine.”

Doctors who supervised the treatment process recorded that the patients endured an array of other symptoms from severe coughing and watery eyes to wheezing and vomiting. The four alleged victims are said to be males under the age of 30. They were kept under observation most of the day, Dr. Ahmad claimed, and were discharged later that evening in a “generally good condition" around 9 hours after they were admitted.

“We immediately got our emergency staff – who are trained for chemical weapon attack – ready for any inquiry or support,” concurred Nidal Shikhani, External Relations Manager at the Chemical Violations Documentation Centre of Syria (CVDCS), which has worked closely with the Organization for the Prohibition of Chemical Weapons (OPCW) to document alleged chemical weapons use. “We were informed that there were four affected victims by chemical weapons toxic gas. They all received emergency treatment.”

Images of the victims were provided to Fox News by CVDCS under the condition that faces and hospital logos were not shown. Medical centers have routinely come under attack throughout Syria's protracted civil war.

A specialized team is said to have collected blood, urine, saliva and clothing samples from the injured to be tested, with the hope of starting a thorough investigation by OPCW. The U.N-backed body did not immediately respond to a Fox News request for comment.

“We fear this will happen again and again,” Dr. Ahmad said. “They gave a green light to attack.”

News that the government of Bashar al-Assad may have used internationally banned substances once again has prompted a harsh, if confusing, response from the United States.

“We continue to see signs that the Assad regime may be renewing its use of chemical weapons,” said U.S State Department spokesperson Morgan Ortagus, cautioning that if the alleged actions by the Damascus government are proven, "the United States and (its) allies will respond quickly and appropriately."

Later, the State Department’s leading diplomat for Syria, James Jeffrey, backtracked somewhat and told reporters that officials were “watching it closely” but could not yet confirm that the alleged attack had occurred.

The U.S. has twice launched airstrikes in the past against Syrian military installations after verifying that chemical weapons were used against civilians. The Syrian government has not responded to the latest round of chemical attack claims and the Britain-based Syrian Observatory for Human Rights said that as of Thursday, it had not identified a chemical attack on Sunday.

ISIS clinging to the last of its territory in Syria

The operation to complete the liberation of Baghouz from ISIS is ongoing, according to a statement from the U.S.-led coalition; Lucas Tomlinson has the details.

But according to the most recent “credibly substantiated” data gleaned by the Berlin-based Global Public Policy Institute (GPPI), chemical weapons have been used at least 336 times since the war started in early 2011. The Assad regime stands accused of using the banned substances 98 percent of the time, while ISIS is documented as having carried out the remainder of all chemical bombardments on Syrian civilians.

“Assad is once again testing President Trump, first by attacking Idlib despite the President’s clear warning, and now by using chemical weapons – violating the President’s bright red line,” said Jameson Cunningham, policy and public affairs strategist for Americans for a Free Syria. “President Trump has responded twice, and we urge him to take swift military action again to protect civilians and deter Assad from further use of chemical weapons.”

SYRIAN HOSPITALS BOMBED BY ASSAD, RUSSIAN TROOPS AFTER COORDINATES WERE SHARED WITH THE UN

Idlib remains the last major bastion of the war-embattled country that remains under the control of forces opposed to the Damascus regime. Ground fighting and bombing sharply escalated in the area earlier this month after a seven-month ceasefire agreement seemed to wither, with many fearing it will amount to an all-out assault by Assad's forces that could prove the deadliest battle in the war to date.

Meanwhile, many in Washington have resumed their push to further punish the Assad government for its long-documented war crimes. The Senate Foreign Relations Committee on Wednesday passed the Caesar Syria Civilian Protection Act, a bill which holds the Syrian leader and its Russian and Iranian allies accountable for the crimes and hampers their ability to fund further human rights abuses.

The law is named after a Syrian who, under the pseudonym Caesar, took grave risks earlier in the war to smuggle out more than 50,000 images of civilians who were barbarically tortured and murdered in government prisons.

The Caesar Act provisions include sanctions on anyone aiding Damascus in executing its barbarities, including construction sectors in the war-torn nation until Assad completely halts all attacks on civilians.

“We have taken high risk for our lives and the lives of our families when we left Syria at the beginning of the Syrian revolution. We had great hope that the world that claims freedom and humanity would put an end to the bloodshed in Syria and work to stop the killing and torture inside the Syrian prisons,” “Caesar” – who remains in-hiding – told Fox News this week. “Especially that we have all the evidence and evidence that condemns the regime of dictator Bashar al-Assad by committing the worst types of torture and systematic killing against the Syrian people inside the basements of the Syrian prisons and intelligence.”

The whistleblower stressed the importance of his namesake legislation being put into full-force by Washington.

“Caesar's law is a powerful message that justice will be handed to Bashar al-Assad and his oppressive regime."