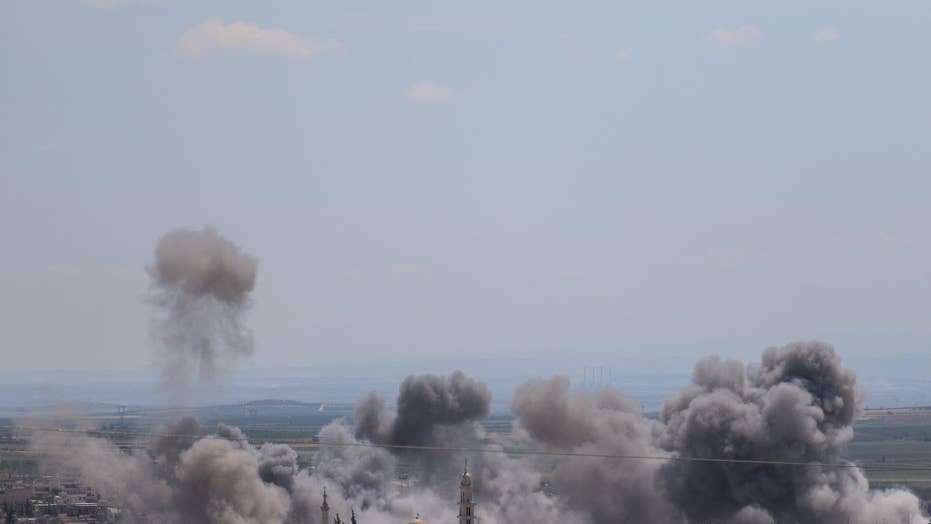 Over the past two weeks, Syrian and Russian warplanes have hammered the last remaining rebel-held bastion in the country's north – killing dozens and prompting almost 200,000 people to flee.

Not only is the renewed offensive raising red flags that a final showdown might be underway in the long-running civil war, but that government forces may have misused data provided to them by the United Nations to gain an advantage and target hospitals.

“This is alarming for us. Five of our 12 hospitals have been attacked, and what is very concerning is that these centers were supposed to be de-conflicted areas. The coordinates of their locations were handed over the U.N. to give the (Russian) government,” Dr. Ahmad Tarakji, President of the Syrian American Medical Society (SAMS) told Fox News. “This was direct targeting, not collateral damage.”

The controversial “notification system” of handing over GPS coordinates of medical centers, schools, and other civilian locations started in early 2018, with NGO’s and aid groups providing their coordinates to the U.N which then passed it on to Russia, Turkey, and the U.S in a quest to deter civilian casualties. But the practice quickly came under fire after a hospital on that list was abruptly attacked by Assad and Russian aircraft.

The bombing campaign in northern Syria this week has elevated concerns that an all-out offensive is underway, with the Assad government determined to re-capture the final rebel pockets of northern Syria. (Credit Syrian Civil Defense)

Tarakji explained that information pertaining to the SAMS-run hospitals battered by warplanes this week were given to the U.N. on the condition that any violations be immediately investigated and taken up with the Security Council. But as of Thursday, he said he had received no response and his calls remained unanswered.

A spokesperson for the U.N Secretary-General did not respond to a request for further comment.

“The current situation is worsening every day, we have never witnessed such brutal attacks by the regime and Russia before, whether airstrikes or ground missiles. They have been bombing main roads, killing civilians and we are all very afraid,” Dr. Mohamed, a 28-year-old surgeon at the Kafranbel Surgical hospital in northern Syria, which came under fire with four airstrikes on Sunday. “We have already been bombed 15 times by the regime, this time we were destroyed. Patients were so scared; some ran into the streets still in their robes with IV drips attached.”

According to the U.N. Office for the Coordination of Humanitarian Affairs (OCHA), air strikes have hit at least 10 schools and 12 health facilities since April 29, wounding and killing hundreds. The bombing campaign is the worst it has been for almost 18 months.

“These attacks against health facilities and other civilian infrastructure are a grave and totally unacceptable development,” Dr. Ahmed Al-Mandhari, the Eastern Mediterranean Regional Director for the U.N’s World Health Organization (WHO) said in a statement, noting that the health facilities that were struck “provided a total of 30,000 consultations, 860 hospital admissions and 700 surgeries per month to a highly vulnerable population.”

Ahmed Hallak, a 23-year-old English teacher from the town of Kafr Sajna, next to the consistently bombarded Kafranbel – which is home to 50,000 people displaced from other parts of the country – said the chaos is “unimaginable.”

“The situation is horrible, very scary. The worst thing is the cluster munitions being used to bomb civilians. Thousands of people are fleeing from northern Hama, its heartbreaking. They are taking whatever they can carry,” he said. “Some men have joined opposition forces to defend their villages and resist the ground invasion, but with warplanes in the sky, there is really nothing that they can do.”

An uptick in the bombing in and around Idlib province in Syria this week. (Syrian Civil Defense)

There has already been some ground traction. This week, regime forces captured two strategic rebel-held towns: the city of Qala’ at Al Mudiue northwest of Hama, and Kfar Nabudah. Nine Syrian soldiers and eighteen rebel fighters were reported to have died in the ground assault.

Indeed, many fear that this is the beginning of the Assad government’s final push to re-take the remaining rebel-held pocket of the war-torn nation, and much of the international community is sounding the alarm that it will mark the worst humanitarian crisis in the already devastating eight-year conflict.

“We have seen this pattern over and over again in previous offensives. Bombing hospitals is often a precursor to a full-scale offensive,” Dr. Mohamed cautioned.

Lina Murad, President of the activist group Americans for a Free Syria said that while “it seems impossible”, they are seemingly “on the verge of the worst humanitarian catastrophe since the beginning of the crisis in Syria.”

Complicating the situation is that nestled in and around the densely-populated civilian areas are fighters loyal to former Al Qaeda affiliate Hayat Tahir al-Sham (HTS) who have sought to control much of the area.

Following heavy clashes last summer, Idlib province and the girdle of land around it had experienced only a few skirmishes due to a Russian-Turkish ceasefire agreement inked in September.

However, Damascus has expressed increasing frustration with the current deal, and – with the military support of Moscow and Tehran – have repeatedly announced their determination to take back all of the ravaged country. Syrian State Media have vowed that the revived onslaught is in response to attacks orchestrated by the Al Qaeda-linked militants operating in the area.

According to the U.N. Office for the Coordination of Humanitarian Affairs (OCHA), air strikes have hit at least 10 schools and 12 health facilities since April 29, wounding and killing hundreds, and highlighting that bombing campaign is the worst it has been for almost a year-and-a-half.

Turkey, which supports the opposition, said Friday that the ceasefire terms had been violated. The European Union and the United Nations have called on Russia and Turkey to protect and maintain the ceasefire, and the U.S. State Department has expressed concern that the violent uptick will furthermore destabilize the region.

Zahra Diab, 35, coordinator of the opposition-backed Syria Civil Defense’s women centers in the northwest, underscored that the scenario unfolding is almost without words.

“More than 113 people have been killed in the last two weeks, including many children. Hundreds of displaced families are arriving every day, they don’t have access to shelter or food and have to sleep in the open,” she added. “Whole families have died.”

The death toll in the Syrian Civil War is estimated to far exceed 500,000 – but it became so difficult to track, the U.N announced in April 2014 that it could no longer keep count.