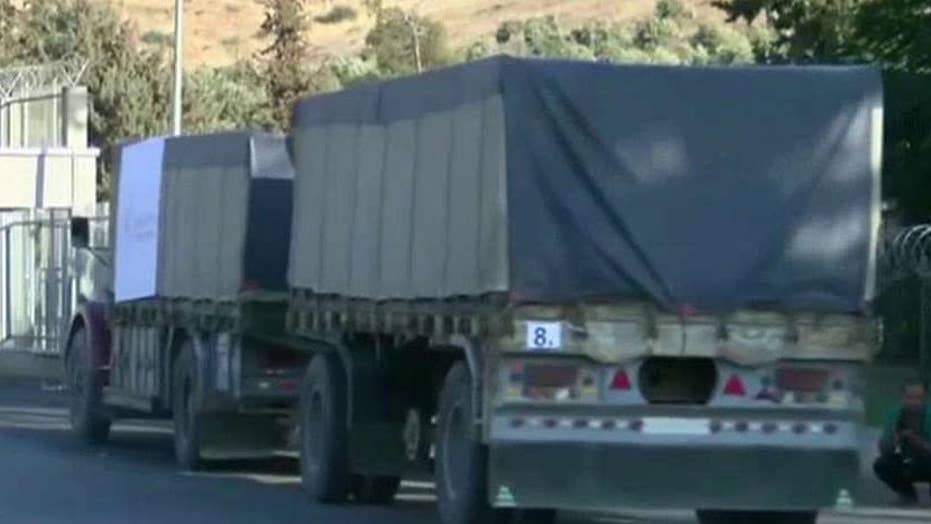 The attack on a Syrian aid convoy in Aleppo that left at least 14 dead "raises very serious questions" about Russia's ability to deliver its end of the ceasefire agreement, according to a senior administration official Monday who said the Obama administration ultimately holds Russia responsible for the incident.

The official called the incident an "outrageous attack on non-combatants," adding that it was a "difficult and trying day" in Syria, while raising doubts about the fragile ceasefire negotiated earlier this month between Russia and the United States.

"We don't know if it can be salvaged," said the official.

Syrian or Russian aircraft carried out the attack, according to the official but declined to be more specific.

At least 14 aid workers were killed, and 18 of the 31 aid trucks were struck in the airstrikes, according to officials with the United Nations. U.N. officials said the U.N. and Red Crescent convoy was delivering assistance for 78,000 people in the town of Uram al-Kubra, west of Aleppo city.

The Syrian government said the ceasefire agreement was effectively over Monday, while in New York, Secretary of State John Kerry expressed hope that it could be salvaged.

Kerry will meet with members of the International Syria Support Group, known as the ISSG, headed by the United States and Russia to find a diplomatic solution to the five-year Syria civil war which has claimed over 400,000 lives.  After blaming the Russians for the attack on the aid convoy, the meeting is expected to be contentious.

France's foreign minister once again Monday called for the full text of the ceasefire agreement between Russia and the United States to be released.

"Documents have been shared with our partners," said the official, but acknowledged there were "operational details" that could not be shared.

"There was never any secret about it," the official added.

Jan Egeland, humanitarian aid coordinator in the office of the U.N. envoy for Syria, told The Associated Press in a text message that the convoy was "bombarded."

Egeland added, "It is outrageous that it was hit while offloading at warehouses."

U. N. Humanitarian Chief Stephen O'Brien called on "all parties to the conflict, once again, to take all necessary measures to protect humanitarian actors, civilians, and civilian infrastructure as required by international humanitarian law."

The convoy, part of a routine interagency dispatch operated by the Syrian Red Crescent, was hit in rural western Aleppo province. The White Helmets first responder group posted images of a number of vehicles on fire in the dead of the night. A video of the attack showed huge balls of fire in a pitch black area, as ambulances arrive on the scene.

A Red Crescent official in Syria confirmed the attack, but said no further information was available.

Elsewhere at least 20 civilians were killed in fresh airstrikes on rebel-held Aleppo city and the surrounding areas, according to the Observatory. And Russia said government positions in southwestern Aleppo came under attack from militant groups, including a massive barrage of rockets.

With the week old cease-fire in danger of unraveling, both Moscow and Washington have indicated a desire to try and salvage the agreement — which had brought a brief respite to at least some parts the war-torn country.

The State Department said that it was ready to work with Russia to strengthen the terms of the agreement and expand deliveries of humanitarian aid. Spokesman John Kirby said Russia, which is responsible for ensuring Syria's compliance, should clarify the Syrian position.

A Russian Foreign Ministry statement late Monday night appeared to signal that the deal could still be salvaged, saying that the failure by the rebels in Syria to respect the cease-fire threatens to thwart the agreement.

The cease-fire came into effect on Sept. 12. Under terms of the agreement, the successful completion of seven days of calm and humanitarian aid deliveries would be followed by an ambitious second-stage plan to set up a joint U.S.-Russian coordination center to plan military strikes against the Islamic State group and a powerful Al Qaeda-linked militant faction.

But from the start, the truce has been beset by difficulties and mutual accusations of violations.

Aid deliveries to the besieged eastern districts of Aleppo have not reached their destination. The U.N. accused the government of obstructing the delivery while Russian officials said rebels opened fire at the delivery roads.

Rebel forces and activists say government planes have bombed areas that are under the truce agreement, including rebel-held parts of Aleppo. At least 22 civilians were killed in government bombings over the last week, according to the Britain-based Syrian Observatory for Human Rights, an opposition monitoring group. The group said four civilians were killed in government-held areas. There were no independent reports of deaths of civilians on the government-side since the cease-fire came into effect.

By Monday, both the Syrian government and prominent opposition activists were speaking of the truce as if it had already failed.

George Sabra, of the opposition High Negotiations Committee, told The Associated Press on Monday that the truce has been repeatedly violated and did not succeed in its main objective or opening roads for aid.

"Hundreds of thousands of people in Aleppo are waiting for this truce to allow aid to enter the city," he said, adding that there are aid trucks still waiting on the Turkey-Syria border. "I believe that the truce is clinically dead."

The Syrian military statement placed the blame on the rebel groups. Damascus refers to all armed opposition groups as terrorists.

One of the major rebel groups in Syria, Nour el-Din el-Zinki, said soon after the Syrian military declaration that the government, Russia and Iran, another major ally of President Bashar Assad, are responsible for the truce's failure.

"The regime of Bashar Assad had no real intention to commit to the truce. Instead it worked to undermine it with organized violations during the week as well as preventing aid from reaching Aleppo," the group said in a statement sent to reporters.

Earlier Monday, Lt. Gen. Sergei Rudskoi of the Russian military's General Staff said in a briefing that Damascus had fulfilled its obligations.

"With the rebels failing to fulfill conditions the cease-fire agreement, we consider its unilateral observance by the Syrian government forces meaningless," Rudskoi said.

Rudskoi said the rebels violated the truce 302 times since it took effect a week ago, killing 63 civilians and 153 Syrian soldiers. The opposition reported on Monday 254 violations by government forces and their allies since the truce started.

The current tensions come on the heels of the weekend air strike by the U.S.-led coalition on Syrian army positions near Deir el-Zour. Syria and Russia blasted Washington over the attack.

The Saturday airstrikes involved Australian, British and Danish warplanes on Syrian army positions. The U.S. military said it would not intentionally hit Syrian troops, and that it came as it was conducting a raid on ISIS positions.

Russia's military has said that it was told by the Syrian army that at least 62 Syrian soldiers were killed in the Deir el-Zour air raid and more than 100 wounded. The Observatory gave a different death toll, saying 90 troops were killed in the strikes.

Assad said Monday the airstrikes of the U.S.-led coalition against his troops was meant to support the Islamic State group, calling the attack a "blatant American aggression."