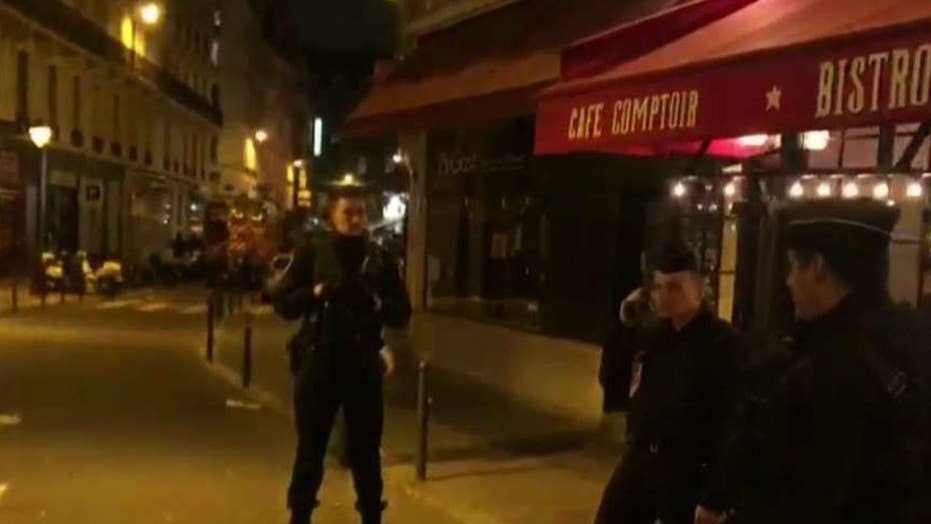 Reports: Two people, including the attacker, have been killed in a stabbing attack in Paris.

A knife-wielding suspect who slashed five people, killing one, in central Paris on Saturday night -- before being slain by French authorities -- has been identified as a native of Chechnya, born in 1997, a French judicial official said.

The parents of the suspect, who was claimed as a “soldier” of ISIS after the attack, have been detained for questioning, the official said.

No other information about the attacker was immediately available.

A police officer cordons off the area after a knife attack in central Paris, Saturday May 12, 2018. (Associated Press)

The Islamic State group, through its affiliated news agency, claimed responsibility for the knife attack, which left a 29-year-old man dead and four others injured.

In a tweet sharing his condolences for the victims, French President Emmanuel Macron labeled the attacker a “terrorist.”

“All my thoughts go to the victims and the wounded of the knife attack perpetrated tonight in Paris, as well as to their relatives. I salute on behalf of all the French the courage of the policemen who have neutralized the terrorist,” a translation of his tweet said.

“France once again paid the price of blood but did not give an inch to the enemies of Freedom,” Macron said in another tweet.

The Paris police said the attacker was subdued by officers during the stabbing attack in the 2nd arrondissement or district of the French capital Saturday. (Associated Press)

ISIS said the attack was in response to its calls for supporters to target members of the U.S.-led military coalition squeezing extremists out of Iraq and Syria, the Aamaq news agency said in a statement.

“France once again paid the price of blood, but did not give an inch to the enemies of Freedom.”

In the U.S., State Department officials voiced their concern.

"We are closely monitoring the incident in Paris, and understand the authorities have initiated a terror probe," a State Department spokesperson told Fox News. "Our thoughts are with the family and friends of those affected. We refer you to the local authorities for further information.

"We stand ready to provide all possible consular assistance should we become aware of any affected U.S. citizens. U.S. citizens in the France are strongly encouraged to directly contact concerned family members in the United States to advise them of  your safety.‎"

The suspect carried out the stabbing attack Saturday evening in the 2nd Arrondissement of Paris, north of the Seine River.

Counterterrorism authorities were called in to lead the investigation after Prosecutor Francois Molins told reporters that witnesses heard the suspect shouting, "Allahu Akbar" -- "God is great" in Arabic.

The assailant, after attacking bystanders with a knife, rushed at police, shouting “I will kill you, I will kill you!” police union representative Rocco Contento told Reuters.

The attacker was then shot by officers and later confirmed dead, Paris police said.

Witnesses reportedly said that the police first tried to use a stun gun on the attacker, but when that failed, they fired two shots, the BBC reported, citing France24.

The attack took place in a popular neighborhood near Paris’ famed Opera Garnier. People were asked to evacuate nearby buildings.

France's BFM television interviewed an unnamed witness in a restaurant who said a young woman was at the entrance when "a man arrived and attacked her with a knife." A friend came to her aid and the attacker left, "hitting on all the doors, all the shops," the witness told BFM. He turned onto another street, and everyone scattered, the witness said.

"I was having a drink with friends and we heard a boom," a witness named Gloria, who had been in a nearby bar, recounted on Saturday night. She said she went outside to see what happened and "I saw a guy lying on the ground."

Another witness described leaving the opera house and being told to go back inside because of the attack.

Interior Minister Gerard Collomb denounced the attack in a tweet.

"My first thoughts are with the victims of this odious act," a translation said.

Collomb said the lives of the injured people were no longer in danger.

Paris has been under elevated security in recent years after a string of deadly Islamic extremist attacks.