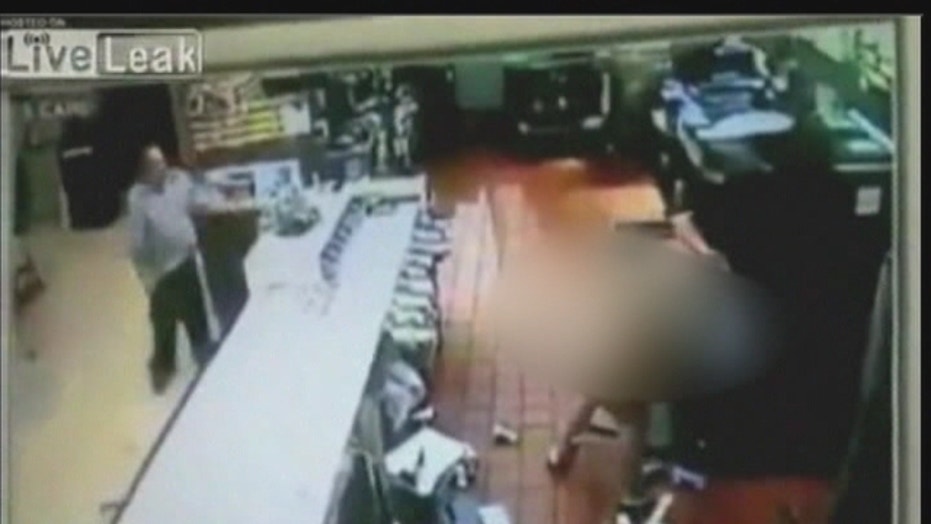 A nearly naked woman was arrested after a destructive rampage inside a Florida fast food restaurant last month, and now surveillance footage of her alleged tirade is going viral.

ST. PETERSBURG (FOX 13) – A nearly naked woman was arrested after a destructive rampage inside a Florida fast food restaurant last month, and now surveillance footage of her alleged tirade is going viral.

Footage posted to the website LiveLeak.com shows the woman's three-minute outburst inside a McDonald's restaurant at 66th Street and 102nd Avenue in Pinellas Park.

The video shows the woman -- clad only in skimpy undies -- emptying the contents of a cabinet onto the floor, knocking over registers and equipment, and helping herself to some soft-serve ice cream. Voices off-camera, apparently employees, chuckle and provide commentary as the surveillance footage rolls.

The LiveLeak website says the incident took place over the weekend, leading to some initial confusion with local law enforcement agencies about whether it actually happened in the area.  But Pinellas Park police now confirm it happened back on March 24.

PPPD identified the woman as Sandra Suarez, 41. Officers say the tirade came after a McDonald's employee turned down Suarez's offer of oral sex in the parking lot.

Suarez was taken to Northside Hospital as a precaution, but police said doctors determined she wasn't under the influence of drugs or alcohol.

She was charged with criminal mischief and resisting arrest, then was released on $7,000 bond.

Reached by FOX 13's Steve Nichols on Tuesday, the mother of two blamed the tirade on bipolar disorder and she does not remember much of it.

Meanwhile, the McDonald's employees who posted the video online have been fired, according to a statement from Juan Illas, the restaurant's owner and operator.

"The situation leading to this woman's arrest was, at the time, surprising to all involved," he wrote.  "However, the posting of the video was without authorization and inconsistent with my values and how we operate our restaurant. The individuals involved are no longer employed with my organization. Any further comments on the situation would be inappropriate given that this is a police matter."

For more stories go to myfoxtampabay.com