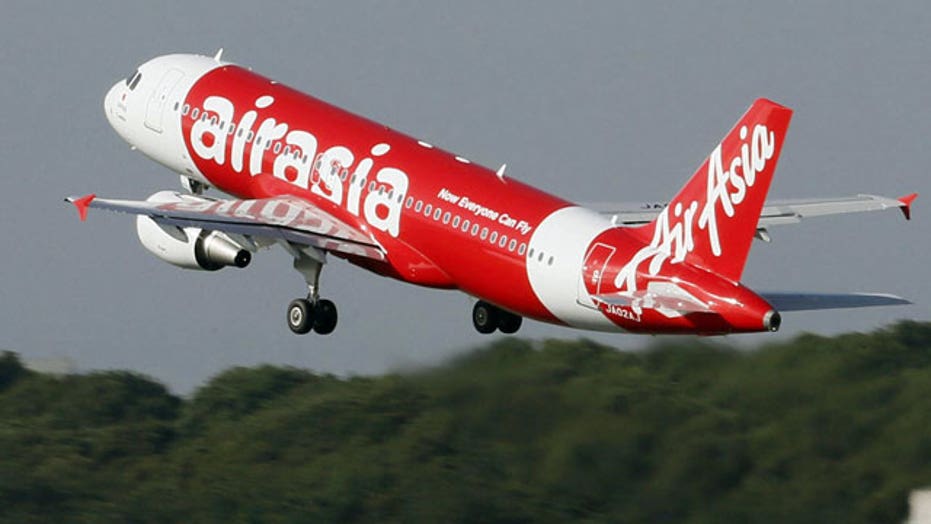 Indonesia cracks down on aviation after AirAsia crash

Strong currents forced Indonesia to expand the search area for the crashed AirAsia plane Tuesday, as rough seas and bad weather pushed debris and made it difficult to reach suspected chunks of the fuselage on the ocean floor.

Two more bodies were retrieved Tuesday, bringing the total to 39. But there are concerns that it will become harder to find the remaining corpses from Flight 8501, which crashed Dec. 28.

"Time is of the essence," said the National Search and Rescue Agency's director of operations, Suryadi B. Supriyadi. "But it seems like it is hard to beat the weather."

The search operation will expand by about 70 square miles, search and rescue chief Henry Bambang Soelistyo said.
Soelistyo said an American ship, the USS Fort Worth, detected two large metal objects on the seabed at a depth of 92 feet and was attempting the identify them.

Seven large objects have now been located on the ocean floor that could be pieces of the fuselage, but strong currents, silt and mud have kept divers from seeing or reaching them.

Two divers plunged into the waters during a break in the rough weather Tuesday but were unable to do much because of strong underwater currents, Soelistyo said.

Dozens of new airlines have popped up in Indonesia in recent years to meet the industry's booming demand, but a string of deadly accidents has raised concerns about safety.

Experts say poor maintenance, rule-bending and a shortage of trained personnel are largely to blame. Infrastructure has also failed to keep pace with exploding demand.

The country's transportation ministry said it was cracking down after it was discovered that Flight 8501 did not have a permit to fly between Surabaya, Indonesia, and Singapore on the day of the crash. It suspended two ministry officials and five workers at Surabaya's main airport Tuesday for allowing the flight. Others are still under investigation.

All AirAsia flights on that route also have been canceled for the time being.

It is not known what caused the Airbus A320 to crash into the Java Sea 42 minutes after takeoff, though Indonesia's Meteorology, Climatology and Geophysics Agency says bad weather appears to have been a factor.

Just before losing contact, the pilot told air traffic control he was approaching threatening clouds, but was denied permission to climb to a higher altitude because of heavy air traffic. No distress signal was issued.

No pings have been detected from the plane's all-important cockpit voice and flight data recorders. That's because high waves have prevented the deployment of ships that drag ping locators. The batteries in the pingers on the black boxes are likely to go dead in about 20 more days.

"We are confident that rescuers would be able to locate them in time," said Nurcahyo Utomo, an investigator for Indonesia's National Committee on Transportation Safety.

The search for the remaining 125 bodies has been exhausting for family members anxiously waiting to identify and bury their loved ones.

Eight Islamic clerics flew in a helicopter over the site Tuesday and scattered rice into the sea, a local tradition, and prayed for those who perished.